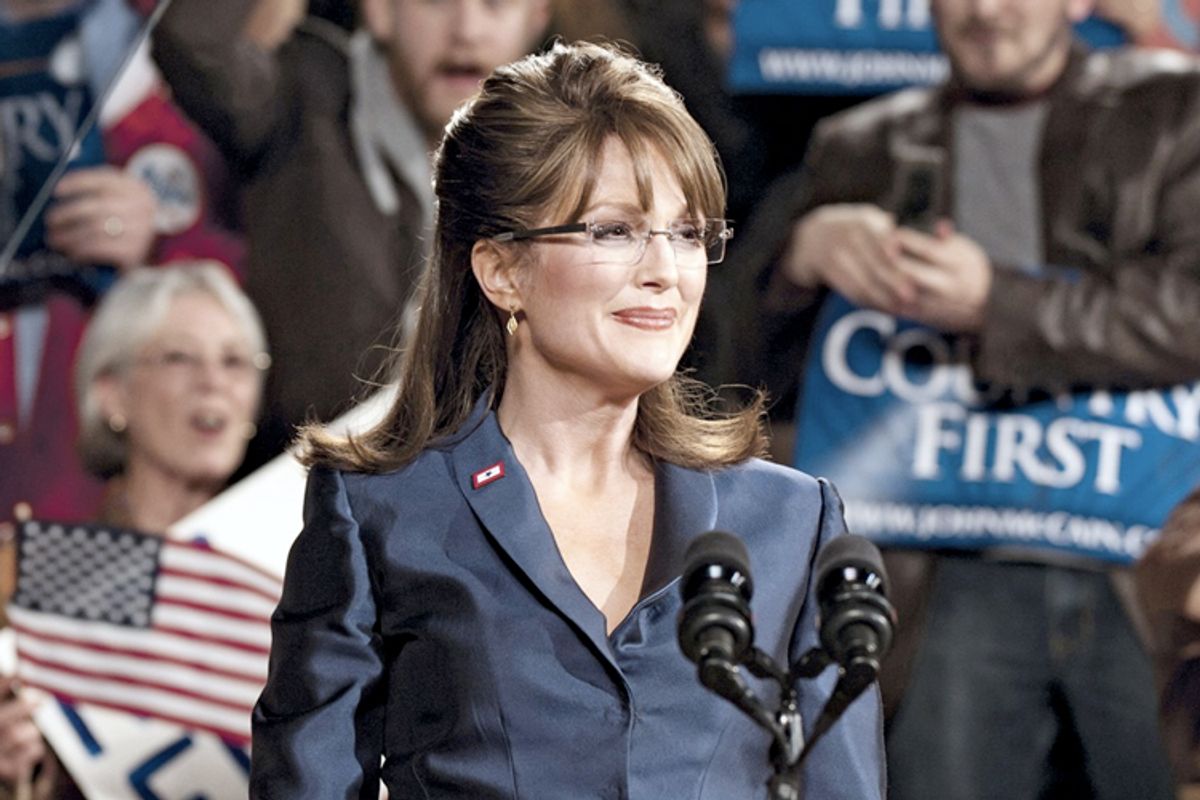 HBO's "Game Change," airing this Saturday, is not actually an adaption of the book "Game Change," by Mark Halperin and John Heilemann. It is "Sarah Palin Goes Rogue," the movie, with a couple of anecdotes borrowed from the notoriously gossipy account of the 2008 election as a whole. (Or, arguably, it's an adaptation of Scott Conroy and Shushannah Walshe's "Sarah From Alaska.")

That is sort of a shame. The Palin thing is the most heavily over-covered story line of the entire 2008 campaign, so focusing on it might be totally logical from a marketing perspective, but it's unfortunate from an artistic one. The film re-creates various moments of YouTube campaign ephemera very well -- remember when that old white lady called Obama an Arab and McCain looked uncomfortable? When it takes us behind closed doors, it's to witness scenes any moderately close observer of the election and its aftermath could've dreamed up him- or herself. It might have been fun to see a TV movie about the Democratic primary fight; the personality clashes of the disastrous Clinton campaign would have made for entertaining television, and Mark Penn is surely a creature crying out for a grotesque Emmy-winning portrayal by, say, Paul Giamatti.

Instead, McCain has won the nomination three-and-a-half minutes into the film. Soon we're watching Julianne Moore watch Tina Fey on TV. You remember the "SNL" sketches making fun of Palin, right? In case you don't, "Game Change" airs lengthy chunks from most of them. It also has tons of actual footage from CNN and MSNBC and Fox News, and it re-creates debates and speeches and the Couric interview and the Charlie Gibson interview and a bunch of other things you saw either live or on YouTube when they happened.

Moore's performance is not just fair but maybe even flattering. (For one thing, she doesn't hit those flat upper Midwest vowels as gratingly as the real Palin.) Woody Harrelson plays strategist Steve Schmidt -- the film's protagonist -- as a grizzled, "too old for this shit" campaign veteran called back to the trail against his better judgment. Jamey Sheridan is given barely anything to do as Mark Salter, McCain's "conscience." Salter, the primary author of his "Maverick" mythos, is limited, after the Palin selection, to making a hilariously over-telegraphed face of concern as everyone else in the war room applauds her first speech.

But the film is about Schmidt and Nicolle Wallace because they were pretty clearly Halperin and Heilemann's primary sources, and we watch them become horrified by the depths of Sarah Palin's ignorance at exactly the same time as everyone else in America became horrified by her ignorance.

Because it's Hollywood, there's very little politics in the film's depiction of politics. Policies are simply things for Sarah Palin to write on note cards and not memorize. Operatives confidently declare, in faux Sorkin-ese patter, that if this or that meaningless decision is made, it means "we'll lose by five."

There is a sheen of faux cynicism (McCain swears like a sailor!) but it masks complete naiveté: Everyone is basically honorable and decent. Nicolle Wallace -- a member of the Bush administration communications team -- is sincerely alarmed at the prospect of someone as dangerously ignorant as Sarah Palin in the White House. On election night, she breaks down in tears as she admits to Schmidt that ... she didn't vote. They embrace.

The film subscribes to the simplest theory of Sarah Palin: That she is childlike, vain and incredibly ignorant but also an essentially decent person and wonderful mother. The moments that come closest to "unfair" -- Sarah Palin doesn't know that the head of Great Britain's government is the prime minister, not the queen -- are basically plausible. This isn't Andrew Sullivan's conniving, dangerous pathological liar. It's an overwhelmed working mother whose most unhinged moments are explained by a crash diet. Her convention speech is largely stripped of its snarling attack lines, imagining a world in which it appealed to "the base" because of Palin's heartfelt commitment to special-needs children and not because she was very good at saying mean things about Obama. (The film actually repeats the bullshit story that her teleprompter broke midway through, and she kept going.) Even when the film has her take a major heel turn -- "if I am single-handedly carrying this campaign, I am gonna do what I want!" -- after "winning" her debate with Joe Biden (played by video footage of Joe Biden), she is still basically an innocent seduced by the adoration of riled-up crowds and national attention. (Todd Palin barely does anything.)

The constant use of actual news footage adds a bit of verisimilitude but also constantly raises the question of why this lightly fictionalized version of the election actually needs to exist. "Game Change" is not really for serious political junkies, who remember all the stuff that did happen and will scoff at the stuff that didn't. (At one point, John McCain answers his ringing iPhone in the middle of the night. He used a BlackBerry, HBO.) But if casually politically involved people want to see their assumptions about Sarah Palin reinforced, well, there are still those "SNL" sketches.

In the end, the Republican operatives who foisted Sarah Palin on an unprepared nation are rightly horrified that they created a monster, but at no point does anyone act concerned that their actual candidate was himself an angry, warmongering old crank with extremely fungible principles. Sure, Sarah Palin didn't know what the Fed did. Do we have any proof John McCain knew what it should've done? Maybe everyone actually was totally unfair to poor Sarah Palin.