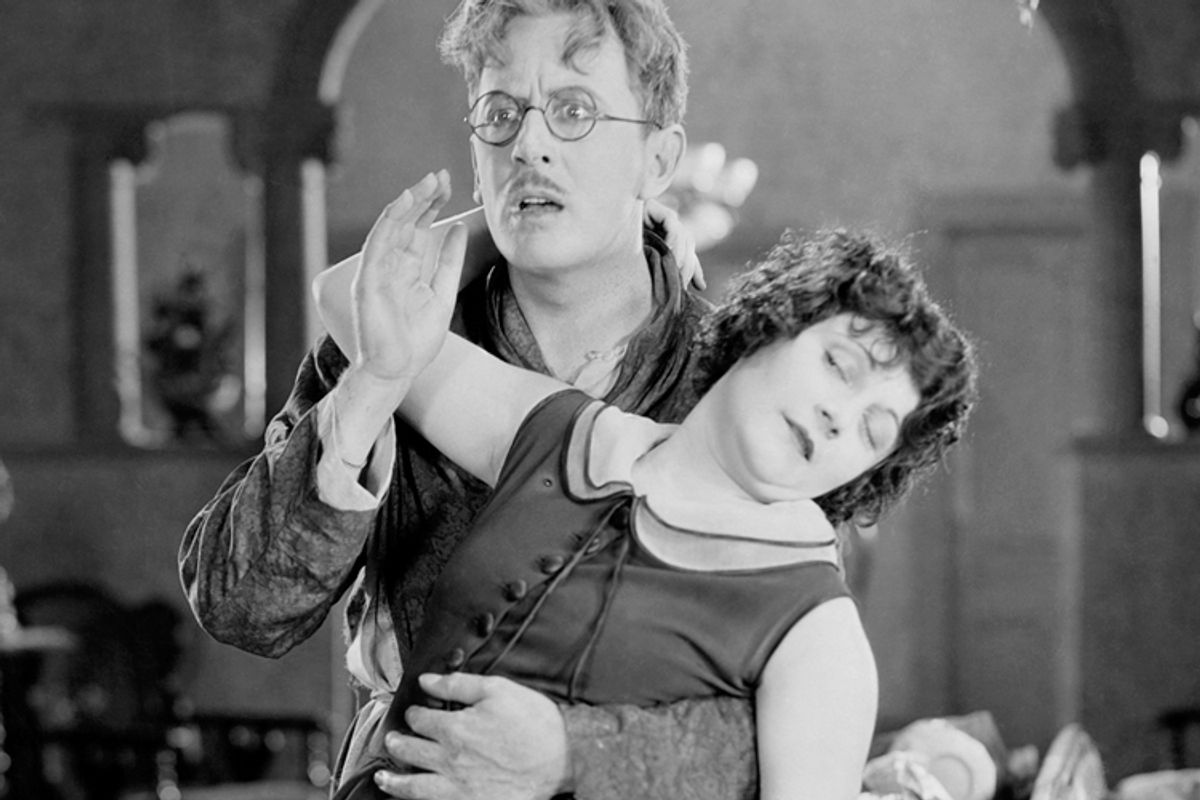 I have 30 seconds to make it to my couch or I will lose consciousness and crash onto the floor. “Get up, you have to get up,” I tell Nathan, who is currently in my way.

"It’s this thing I have. It happens all the time. Please get up.”

Nathan stands and I charge through the front door, lumbering through the hallway like Godzilla. I nearly trample my beagle, who squeals like an unsuspecting villager does when the killer lizard comes to town. I consider crawling to my couch, but I am also trying to impress Nathan. If I fall unconscious, I could be out for up to 10 minutes. From my experience, men don’t take it well when you collapse without explanation.

My ears ring loudly. The harder I fight the faint, the more I sweat. I fling myself on the couch, hand thrown over my forehead. I'm not trying to be melodramatic; I'm just trying to keep myself grounded in the moment. The sweat pours off me, drenching my cotton dress. My vision returns enough to see Nathan staring at me in terror.

“Should I call an ambulance?" he asks.

As far as interactions with the opposite sex go, this one is a little awkward. And it's not the first time.

You see, I am narcoleptic. It’s bad enough that I suffer from a bizarre neurological condition that hardly anyone considers unless it’s the punch line of a joke. But my narcolepsy gets worse when I'm emotional. My doctor tells me passing out is linked to intense feelings; unfortunately, I am intensely emotional. I cry at strangers' funerals. I laugh louder and harder than anyone at a good joke. There are few emotions I don’t experience with intensity. Nothing is worse, though, than being around men I am attracted to. I actually swoon, like a modern-day version of the vapors.

I was in sixth grade in Catholic school when I began fainting. I was a lanky, clumsy 12-year-old with a mouthful of braces and big plastic glasses, enamored with an Irish boy named Liam Brady. All the girls had a secret crush on him -- brown hair, bright blue eyes and milky skin.

As we stood in line for Communion, inching forward, hands folded, I heard a ringing and my limbs became heavy; it took a Herculean effort to move. A blush flooded my face, and then I couldn’t see. Everything turned black and bright lights shot at me like I was going warp speed on the Starship Enterprise. The next thing I knew I was lying in the lap of Mrs. Tupper, an eighth grade teacher who lived a block away from me. I smelled the hideous burning sulfur of smelling salts.

“What happened?” I asked.

“You fainted right onto Liam Brady.”

I burned with confusion and embarrassment. I fainted? On the cutest boy in class? This was grade-school death. No boy would ever look at me the same. Every girl would relish my humiliation. Lucky for me, it was the last time I fainted on Liam Brady. But it set the stage for a lifetime of strange romance.

I once rushed out of a bar after flirting with a study partner and fainted on the steps of a church. I once passed out in an alley, banging my head on a garage door, waking up in a puddle beside a guy I was dating, who said, “I thought you were dead!”

Tension built between us after that night, and I sensed I was a bit too much work. I wasn't a drama queen. I wasn't a jealous girl. I just had this weird thing. He never said anything about it, but I've had guys who told me they were too young to deal with a woman with so many problems.

My narcolepsy affects non-dating situations, too. I slumped down the wall of a gallery once, swearing to an editor that I wasn’t drunk. Over and over I repeated, “I am not drunk,” without realizing this is exactly what a drunk 20-something says to her boss. I've woken up on the floor of my apartment, wondering why I was lying in the kitchen, like a person who has blacked out without drinking seven cocktails. For 16 years, doctors had no answers until a neurologist had the bright idea to do a narcolepsy test after I complained of constant exhaustion. This phenomenon I call fainting is a combination of cataplexy, loss of muscle control and falling asleep.

But having an answer to why I do this doesn't make me feel more comfortable, which is why I never told Nathan. I just want to be like everyone else. I don't want to explain a weird disease. So I hide it, the way everyone tries to hide what they are most embarrassed about. But here is the worst part: The more I want to be normal -- the more I try to fit in or be likable -- the more prone I am to faint. It's like my unconscious undermines me.

I just want to be like other women, women who can date men casually without having to explain their mysterious spells. Women who are calm and composed and can actually remain conscious while experiencing strong emotions. Then again, I understand that all women -- that all people -- come with quirks. And this disease, for its irritations, can be a pretty good barometer of my behavior. When I faint on men, I know that I'm trying too hard. When I started to feel faint around Nathan, I knew I must be falling for him, even though I didn't want to. He has a girlfriend, and I'm still reeling from a terrible divorce. I tried so hard to act like he was just another friend. But my brain had other ideas.

Nathan gets me a glass of water, and I try to explain my situation. My doctors say if I could feel less, I wouldn’t pass out as much.

It sounds so simple when he says it. Why can't I be so straightforward and accepting? The fact that he's so easygoing about it makes me feel closer to him. It makes my heart beat a little faster. In fact, if I weren't already reclining, I might faint.

Meghan Holohan (@missmeghanmack) is a freelance writer. She blogs regularly about weird science, sex, and serial killers for Meghan Holohan