The right wing's pornography of resentment

When Rush Limbaugh calls women sluts and asks for their sex tapes, he's not the first prude who wants to watch 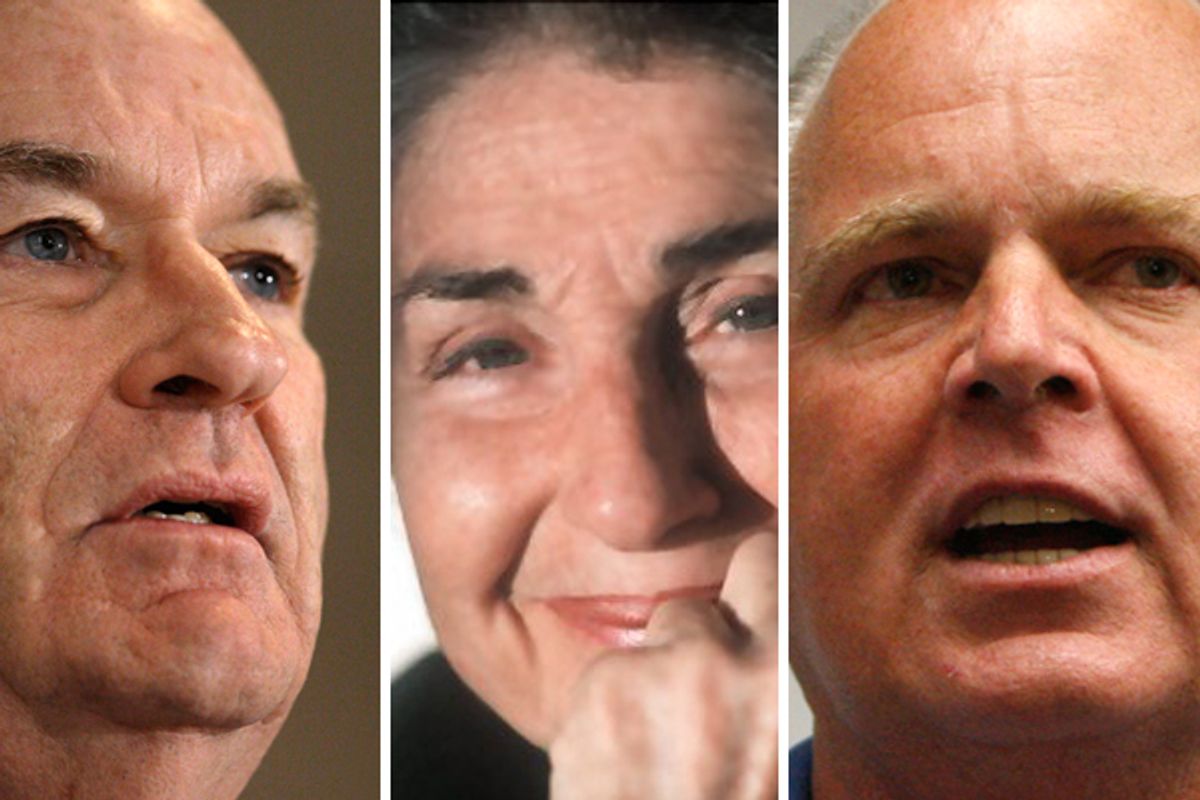 The sliming that Sandra Fluke has endured -- from Rush Limbaugh, of course, but also from his rabid cheering section like Atlas Shrugged’s Pam Geller (“She is banging it five times a day…. Calling this whore a slut was a softball”) and the blogger Ace of Spades (“A shiftless rent-a-cooch from East Whoreville”) — is bizarre and over-the-top enough.

But even weirder was Limbaugh’s proposition: If “Miss Fluke and the rest of you Feminazis” expect us to pay you to have sex, “we want something for it,” Limbaugh said last week. “We want you to post the videos online so we can all watch.” (Those words were later erased from Limbaugh’s official transcript of the show; Atlantic Wire preserved them.)

Prudery and prurience often go hand in glove. Prurience and paranoia are fellow travelers as well. Eighteenth- and 19th-century anti-papist authors and pamphleteers turned out a steady stream of stories about the goings-on between priests and young women in confessionals. "The Awful Disclosures of Maria Monk," the ghosted confessions of a nun who was supposedly held as a sex slave in a convent in Montreal, was outsold only by "Uncle Tom’s Cabin" in the years before the Civil War. “Anti-Catholicism,” as the historian Richard Hofstadter put it, “has always been the pornography of the Puritans.”

The church father Epiphanius' horrifying description of the Phibionite Gnostics’ supposed sexual practices in his "Panarion" dates back further still, to the late fourth century. It’s worth quoting, since it contains so many monstrous (and licentious) allegations — and perhaps the world’s earliest depiction of what a right-wing propagandist today might call a partial-birth abortion:

First they have their women in common. … The man leaving his wife says to his own wife: Stand up and make love with the brother. ... Then the unfortunates unite with each other, and as I am truly ashamed to say the shameful things that are being done by them. ... Nevertheless, I will not be ashamed to say those things which they are not ashamed to do, in order that I may cause in every way a horror in those who hear about their shameful practices. ... They have intercourse with each other but they teach that one may not beget children. ... And if ... the woman becomes pregnant, then ... they pull out the embryo in the time when they can reach it with the hand. They take out this unborn child and in a mortar pound it with a pestle and into this mix honey and pepper and certain other spices and myrrh, in order that it may not nauseate them, and then they come together, all this company of swine and dogs, and each communicates with a finger from the bruised child. ... Many other horrible things are done by them.

They have intercourse with each other but they teach that one may not beget children — a practice that has come in for some unusually intense criticism this campaign season, considering how commonplace it is.

There are no studies that I am aware of to back this up, no authorities I can cite in a footnote, but while almost everyone worries that their enemies are enjoying more and better sex than they are, programmatic haters are downright certain of it. Most men are mildly anxious about how they measure up sexually, but haters are obsessed with what they fancy to be their enemies’ superior prowess and potency; worse yet, they are morbidly certain that given half a chance, their wives and daughters (or their sons, for that matter) would happily surrender themselves to them. Call it “The Pornography of Resentment.” Though they might put their women on pedestals, there is more than a whiff of misogyny in their chivalry.

“The black-haired Jewish youth lies in wait for hours on end, satanically glaring at and spying on the unsuspicious girl whom he plans to seduce, adulterating her blood and removing her from the bosom of her own people,” Adolf Hitler wrote in "Mein Kampf." American slaveholders, who raped their female chattel with neither compunctions nor consequences (“To debauch a Negro girl hardly injures an American’s reputation,” as Tocqueville famously observed in "Democracy in America," “to marry her dishonors him”), suffered nightmares about their male slaves’ designs on their wives. Some of the anti-gay literature circulating today has a wistfully lascivious undertone to it as well, premised on the notion that predatory gays can “recruit” confused teenagers, presumably by offering them a better time than they would have had with a member of the opposite sex.

A couple of years ago, I came across a bizarro-world specimen of this masochistic tendency in the writings of the 13th-century Jewish sage Isaac ben Yedaiah. A woman, he wrote, “will court a man who is uncircumcised in the flesh and lie against his breast with great passion, for he thrusts inside her for a long time because of the foreskin, which is a barrier against ejaculation.”

This is because of the pleasure that she finds in intercourse with him, from the sinews of his testicles — sinew of iron — and from his ejaculation — that of a horse — which he shoots like an arrow into her womb. They are united without separating and he makes love twice and three times in one night. . . . But when a circumcised man desires the beauty of a woman . . . he will find himself performing his task quickly . . . he arouses her passion to no avail and she remains in a state of desire for her husband, ashamed and confounded. . . . She does not have an orgasm once a year, except on rare occasions, because of the great heat and the fire burning within her.

Ben Yedaiah went on to propose that it was this very penchant for premature ejaculation that accounted for Jewish supremacy in intellectual and spiritual matters, because their lackluster sex lives left them with more bandwidth for study and prayer -- but that sounds like sour grapes to me. Let’s face it: A lot of hatred stems not just from fear but from envy.

If bondage pornography is the preferred genre for the expression of racial, gender and religious resentment, 1950s science fiction movies embodied many of America’s deepest fears about the insidious nature of the Communist threat. A spurious “textbook” that the Soviet Union purportedly provided to aspiring sleeper agents in the 1930s, "The Communist Manual of Instructions of Psychopolitical Warfare," explained how “a good and experienced psychopolitical operator, working under the most favorable circumstances, can, by the use of psychopolitical technologies, alter the loyalties of an individual so deftly that his own companions will not suspect that they have changed.” The book was widely circulated in the mid-1950s and can easily be downloaded on the Internet today. Almost certainly concocted by the young L. Ron Hubbard, it resonated perfectly with the nation’s paranoid mood.

The young boy in "Invaders From Mars," who realizes that aliens have possessed his parents’ minds, and Kevin McCarthy’s desperate efforts to warn the public about the soulless pods who were replacing his neighbors in "Invasion of the Body Snatchers" both reflected and exacerbated those anxieties. As Jeff Sharlet relates in "The Family," the movie "The Blob" was conceived by a Christian filmmaker, Irvin “Shorty” Yeaworth, at the 1957 National Prayer Breakfast, specifically as a metaphor for creeping Communism.

The Great Adversary of the right-wing imagination is supernaturally protean; it can take possession of your thoughts and subject you to mind-blowing sexual pleasure, whether you want it or not; it can change its appearance at will. It is not just Satanic. For all intents and purposes, it is Satan — both the object and the reification of shameful and frustrated desires.

And so we come back to Sandra Fluke. Limbaugh’s defenders rushed to prove that she is neither a victim nor even a real law student, but is in fact a professional provocateur, a “plant.” “There is no doubt in my mind, in my investigator’s mind,” Bill O’Reilly opined, “that this woman, from the very beginning, was what they call ‘run’ by very powerful people … So I’m going to say — and I can’t prove it beyond a reasonable doubt, I think I will be able to — that this was run out of the White House. The White House ran this.”

Since this crowd also believes Obama is not who he says he is — if he is not a Kenyan-Muslim impostor, then at the very least he is a Saul Alinksy-style radical — it all makes a rough kind of sense, in a tin-hat sort of way. And I’m not done talking about sex yet, either.

If you didn’t know it, Obama is a disciple of Alfred C. Kinsey and Playboy magazine. Just ask Dr. Judith Reisman, who has "exposed" his administration’s war on the family -- beginning with mandatory sex education for kindergarteners and continuing with the normalization of homosexuality. “Dr. Kinsey said that his mission was to eliminate the sexually 'repressive' legal and behavioral legacy of Judeo Christianity,” she says. “[His] mission has been accomplished, mostly posthumously, by his legion of true believers – elitists who have systematically brainwashed their fellow intellectual elites to adopt Kinsey’s pan-sexual secular worldview and jettison the Judeo Christian worldview upon which this country was founded and flourished.”

I will not be ashamed to say those things which they are not ashamed to do, in order that I may cause in every way a horror in those who hear about their shameful practices. It’s almost as good as watching.

Arthur Goldwag's new book, "The New Hate: A History of Fear and Loathing on the Populist Right," was published by Pantheon in February. He is also the author of "The Beliefnet Guide to Kabbalah," "Isms & Ologies" and "Cults, Conspiracies and Secret Societies."