A superfan argues there are three artistic voices in video games. The most important? Yours 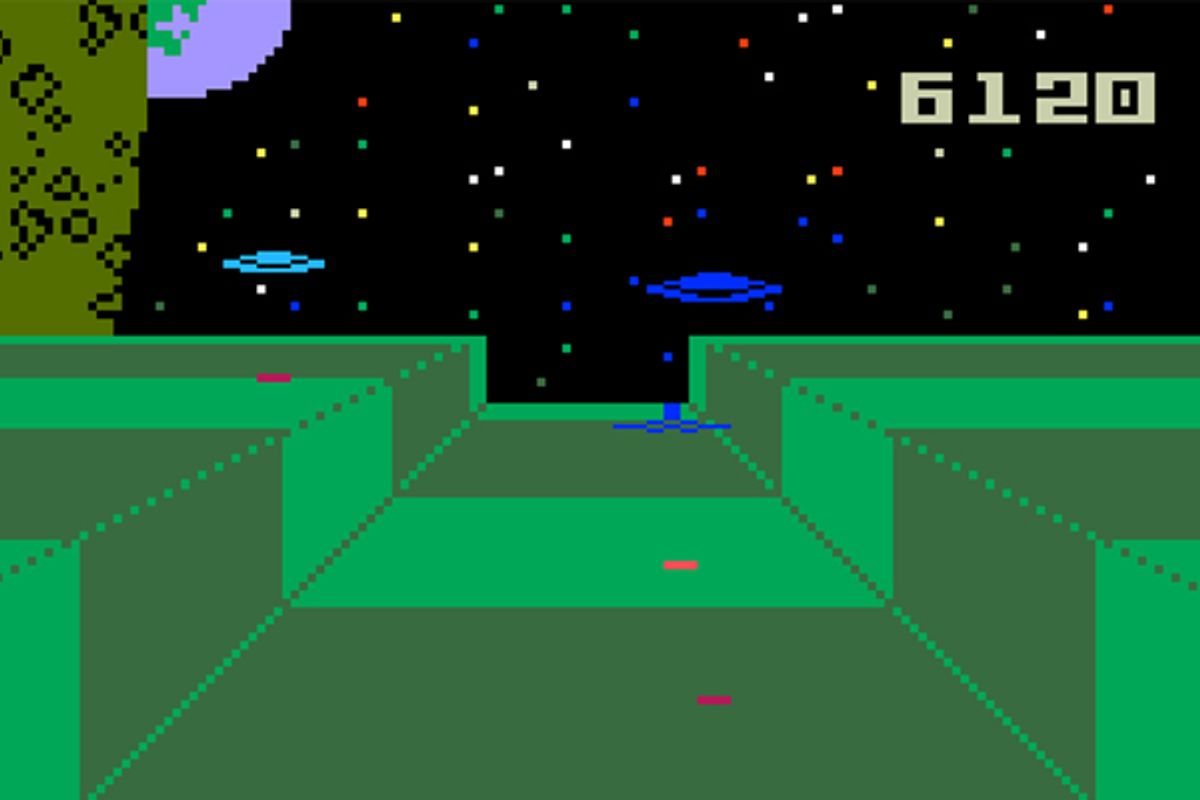 For self-styled "Bit Baby" Chris Melissinos -- who has quite literally grown up with video games, watching the form develop and mature over its 40-year history -- there's more to digital game-based art than killer graphics and imaginative atmospheres.

What distinguishes video games from movies and books, Melissinos argues, is the fact that individuals playing the same game are likely to to have significantly different experiences. In his eyes, it's the player who elevates the game from attractive amusement to art form.

Fittingly, "The Art of Video Games," which opens March 16 at the Smithsonian American Art Museum in Washington, D.C., brings visitors face-to-face not only with still images and video clips from games -- but also with (abbreviated) playable games, including "Pac-Man," "Super Mario Brothers" and "Myst." An accompanying book incorporates imagery and other materials (including a number of illuminating interviews) from the show.

Melissinos spoke to me over the phone about the user's role in creating video game art, and his "separation anxiety" over lending much of his personal collection for the exhibition. Click through the following slide show for a quick spin through 40 years of eye-grabbing digital graphics.

Is it unusual for people to regard video games as "art"? How many major museums have featured shows like this one in the past?

It's hard to quantify. Several art shows have been done about the art within video games. Most times, what will happen is you'll see a very high resolution screen shot or still image from a game posted with credit information -- and you go through and marvel at the complexity and the intent behind it. However, the history of doing this is very short, in that video games have only been around commercially for about 40 years. This is still a very new medium.

This is the first show of its kind that we've been able to discover -- a show that actually looks at video games as an art form, and examines the progression of that art form over time. It isn't just about the art within the game; it's about games themselves as art.

What's the biggest change you notice over the 40-year period this exhibition covers?

There are predictable things that change, of course: With time, you get better technology, better techniques, better game development, better design, better storytelling. But I think it's more interesting to note what doesn't change over time. What doesn't change are certain core mechanics that are particular to a type of game. In terms of action-adventure games, here's a good example: When you see Pitfall Harry leaping for a vine in "Pitfall!'s" jungle setting, and you see Nathan Drake in "Uncharted 2" leaping for a vine in that other jungle setting, you realize that there is a vocabulary of mechanics, a vocabulary of activity that exists within a particular genre of game, that doesn't really deviate from these core mechanics over time. So while technology gives artists and designers the ability to create bigger, more immersive, more expansive, more descriptive environments and experiences, there is still this thread, this echo of design that persists over time, from generation to generation. I think that's fascinating, because what it's saying is that the fundamentals of the particular games, around which we build this language and mechanics, stay true. It's the way that people are able to engage in the modern version of these experiences, because it's something that has been derived from the past.

Can you explain your own background in video games?

I was born in 1970; I consider [my generation] to be the "Bit Babies," because we were the first kids who actually appropriated computer technologies into the home. They started to become a natural part of our existence. I started programming at the age of 9; I wrote my first full game at 12. I ... absorbed as much material and history as I possibly could over that period.

In the '90s, I used to run the Atari and SEGA forums as a volunteer for AOL; I made my way, eventually, into the technology industry, and over the course of my time at Sun Microsystems, I rose to become the chief gaming officer for the company, a role that I held for about 11 years. I built video game technology and platforms that game developers would use for browser-based games, mobile games, PC games, these sorts of things.

I've been around and involved in the games industry for many years, but I'm also a collector. Almost all of the machines in the exhibition, save for a few that were donated by other friends in the industry, are mine. They're actually the machines out of my home. (I'm feeling a little separation anxiety.) I captured all the footage that was used in the exhibition, too, and the still images were principally ones that I captured myself. This is the outpouring of all of my observation, participation, and love of game development, since I was a kid.

One premise of the exhibition is that each player experiences a particular game in his or her own way. What's the role of the user in creating this sort of art?

This question ties directly into something that I call the "three voices of video games." It's what separates video games, as an art form, from any other form of art.

The first voice is that of the designer or author. Somebody who is crafting a world, an experience, an expression and point of view -- something they want to say through their game. What they want to say could range from a message that is socially reflected to something that is just designed to entertain and delight or enthrall.

The second voice is that of the game itself. The mechanics of the game, the possibilities faced, how you interact with that environment as it's presented to you ... all this is that second voice. But none of it becomes art until it's played. And that's where the voice of the player, the third voice, comes in.

We, as players, bring to the experience our own moral code, our own experiences, our own desires and tastes; what comes out of the experience is very personal and unique for every single person who plays the same game. Contrast this to the way people experience books or movies. If you and I watched Episode 5 of "Star Wars," which is of course, the best one, you might say "Do you remember this one scene?" and I'd say, "Yes, I remember that scene." It is a shared experience that really does not deviate from the author's intent. But with a video game, it's different. You and I could both be playing "Uncharted," and you might say, "Did you explore this one area?" And I could say, "No, I explored this area instead." But we still both arrived, at the end of the game, at the same place the author intended. So video games allow the authority of an author to remain, while still allowing for this lateral exploration by the players themselves, within that narrative arc. That's what's different about video games; that's what makes them so compelling as an art form.

How did you choose which games to include?

It was a really interesting process. There's a story that I wanted to tell -- the story of how the form evolved, while staying true to the core mechanics that underpin particular genre[s]. That informed the type of games that I wound up picking. There are no sports games, there are no fighting games; they just did not fall into the narrative that I set. It would have been very easy for me if I had just said, "I'm going to pick 80 games, and I'll pick them out of my collection, and I'll pick them out of the ones that I've experienced or know the most about, and be done with it." But this wasn't about my picks ... So rather than just focusing on 80 games, we selected 240 games that would still allow me to tell the story I needed to tell, and we opened up a website to allow a public vote on the materials. This way, I could allow that third voice, the voice of game players just like me -- people who love the medium, and invest their time, their dreams, their career and their artistic expression into [this] -- to have a voice. [Based on the public vote,] we distilled the original 240 games down to the 80 that are represented in the exhibition.

Sometimes the decisions about which games and components made it into the exhibition were ones that even I had trouble with; there were things that were left out of the exhibition that personally, I would have loved to include. But because they did not fit in the narrative that I created, and they didn't have as much of an impact on American society as other platforms or games did, they didn't make it in.

Which video game is your personal favorite? Which do you think is the most striking to look at?

[SEGA Saturn] sits in an era we call the "transition era." The reason we named it "transition" is because it was a time when 3-D technologies were really becoming present in American homes ... The problem was so much of game development and game creation took place in a 2-D environment; you were now going back to an entire body of artists and saying, "I know that you've only ever painted in 2-D, but I need you to sculpt in 3-D."

[During this] transitional period, ... [artists'] ambitions often exceeded the capability of the machines they were creating their games for. So what you have in games like "Panzer Dragoon" are very obviously two-dimensional graphics, and three-dimensional graphics, all within the same game play field. It's almost as if they had one foot in the past and one foot stepping into the future; they're kind of straddling this era. That's what I love about it: It's so ambitious in what it attempted to do, and it is beautiful in its own right. Between the musical score and the environments, if you give yourself up to the game, it's a fantastic experience to have -- and one that I believe still stands up to this day. But if you take a step back, and peel that veneer off, you also almost see the struggle that the artists had in terms of what it is they were trying to convey. I think that's beautiful.

"The Art of Video Games" will be at the Smithsonian American Art Museum in Washington, D.C., from March 16 through Sept. 30, 2012; for details of its subsequent national tour, click here. The accompanying book is available from Welcome Books.