Florida voters, get ready to hear about a Senate contender's wild past 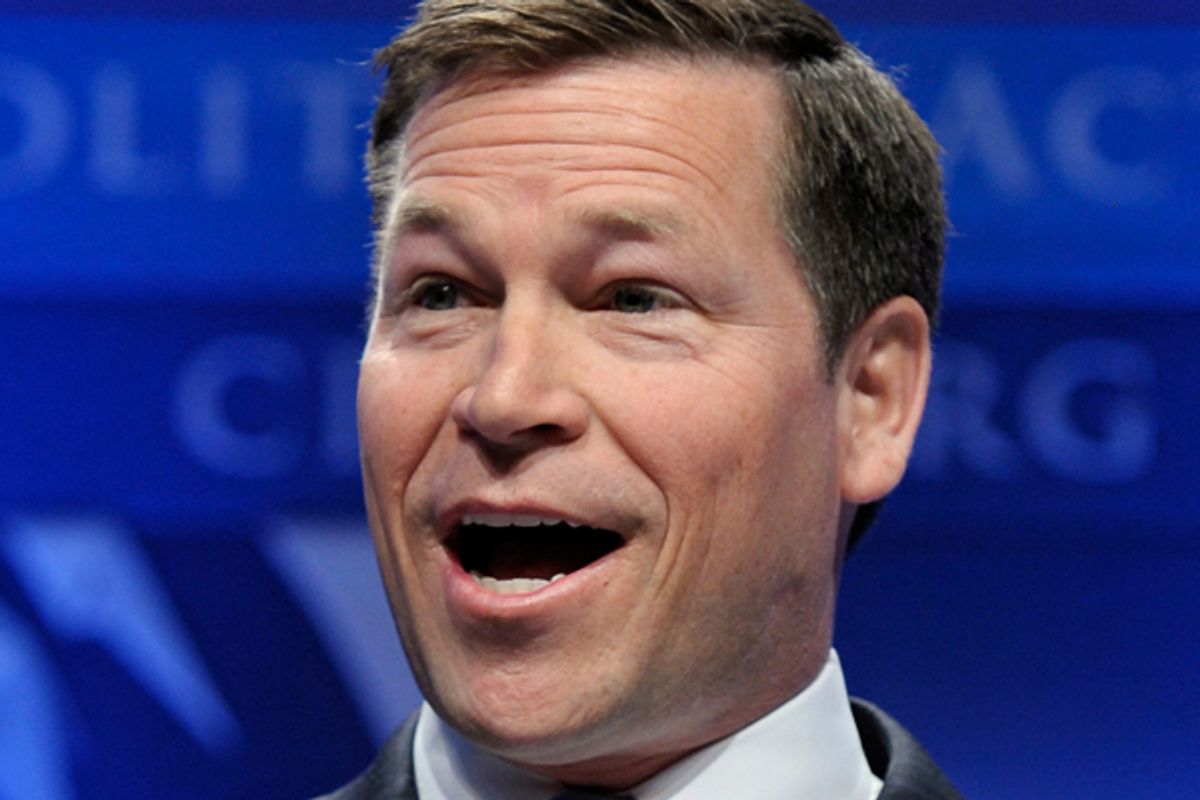 Rep Connie Mack IV (R-Fla.) is running for his father's old U.S. Senate seat, currently held by moderate Democrat Bill Nelson. (Mack currently represents the same district his father did in the House of Representatives.) Mack's opponent for the Republican nomination is George LeMieux, who was an appointed U.S. Senator for a little more than a year, and apparently grew to enjoy the gig. LeMieux, trying to make conservative voters forget about his long association with hated ex-Republican ex-governor Charlie Crist, is fighting dirty, accusing Mack of awful things like not paying child support (false) and having a bizarre history of public brawling, leading on one occasion to his arrest. That one's... true.

Some background: Mack's great-grandfather was the Connie Mack, the legendary Philadelphia A's manager and owner who still holds Major League Baseball's records for wins. (All four Connie Macks are actually legally named Cornelius McGillicuddy. Running for office under your famous grandfather's nickname is pretty silly, for the record.) Mack has not had a terribly notable tenure in the House, though thanks to name recognition he is on TV with some regularity, and he has occasionally taken positions that place him at odds with his fellow Republicans. (He said nice things about Wikileaks, and he seems to vote for limiting the executive branch's surveillance and domestic intelligence-gathering powers just as often as he votes to expand them.) He is married to Mary Bono Mack, California congresswoman and widow of Sonny Bono.

Mack's history was first reported when he ran for Congress in 2004, but a statewide race means further scrutiny. And the incidents are certainly worthy of further scrutiny, because they are basically straight out of "Eastbound and Down." The "incidents" are incredible even by the standards of second-generation ne'er-do-well legacy Congressional admissions like Patrick Kennedy and Rand Paul. The AP's dry account of Mack's own explanation of the incidents in question resists summary.

Mack's campaign said he won't discuss the incidents with The Associated Press, saying he has already answered questions about them, but here's how Mack explained each incident during a deposition taken in 1996, four years after the fight with Gant:

— Sometime around 1987 when Mack was in college, he was driving and stopped at a drawbridge with friends in Palm Beach County. One of his friends was screaming like comedian Howie Mandel, which apparently upset the driver next to them. When the man approached Mack's car, Mack got out and the man jumped on him. The two wrestled, struck each other and when the drawbridge went back down, Mack got back in his car and drove off.

— Within the next year, Mack's girlfriend was driving his car when a driver forced her off the road. Both cars stopped and Mack got out. The other driver tried to punch Mack, so Mack punched him. The driver went back to his car, grabbed a baseball bat and chased Mack around the car and smashed its windows.

— In 1989, Mack and two friends were at a Jacksonville nightclub and Mack had nothing to drink. A bouncer asked the three men to leave because one of Mack's friends was violating the club's no hats policy. Mack asked to speak to the manager and questioned why they had to leave. The manager didn't have time to talk with him and asked an off-duty sheriff's deputy to escort them out of the club. Mack never resisted, never cursed, yet was still arrested.

— In 1992, Mack used Gant's table to sign a credit card receipt while getting ready to leave Calico Jack's. Gant shoved Mack twice. The second time, he was hurled toward a crowd, which pushed him back. As he was thrust forward toward Gant, Mack put his hands out to brace his fall and Gant got him in a headlock. He hit Gant's genitals in an attempt to free himself, fearing he might be choked to death.

"Gant," in the last story, is famed Atlanta Braves outfielder Ron Gant, because of course.

In Mack's version, he was sober as a hanging judge each time he was ejected from a drinking establishment or chased around his car by a baseball bat-wielding assailant. Who among us hasn't soberly and politely asked the manager of a Jacksonville nightclub why our hat-wearing friend had to be ejected? Mack was simply a victim of circumstance that time he hit Ron Gant in the crotch at Calico Jack's.

Do these arrests and brawls disqualify Mack from a Senate seat? Or do they make him, as at least one blogger has argued, "kind of perfect to represent Florida in the Senate"? It's up to a bunch of Republicans to decide. (They will almost definitely decide to go with Connie Mack.)