With songs by Taylor Swift, Arcade Fire and Neko Case, "Hunger Games" may create something rare -- a #1 soundtrack 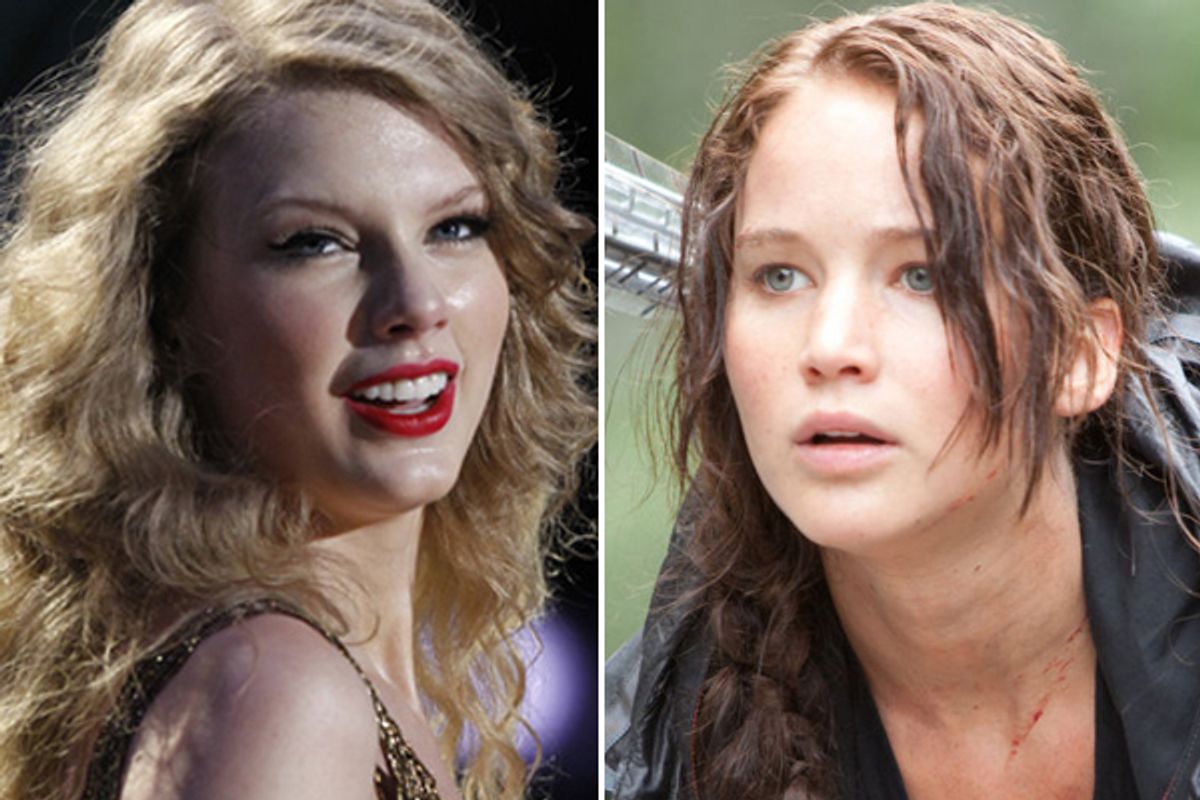 Clad in a modest dress and made up to look like she’s not made up, Taylor Swift wanders pensively through a bare wilderness in her new video for “Safe & Sound.” It’s the first single from the upcoming “Hunger Games: Songs from District 12 and Beyond” and a rarity in today’s pop landscape: a true soundtrack hit. The clip, which was directed by Philip Andelman, strives for Post-Apocalyptic Rural; you almost expect to see zombies off in the mist, lumbering toward brains. But nothing attacks Swift on her walk through the wilderness, and the only activity she encounters are fires off in the distance — an omen of storms and doom approaching.

Nothing much happens in the video, but its muted color palette, patient pace, and most of all that looming threat make it unusually effective. With its piercing guitar theme and the subdued production courtesy of T Bone Burnett, the song reflects that mood, even as it gives so much time over to lyric-less passages. Swift may be better casting than even Jennifer Lawrence, who plays the heroine Katniss Everdeen in the film adaptation of Suzanne Collins’ young-adult novel. The 22-year-old singer-songwriter is arguably the most successful musician of the moment, and her two songs — “Safe and Sound” and “Eyes Open” — will ensure that the “Hunger Games” soundtrack will sell very well.

More than that, however, it makes sense to get an artist whose primary subject has been adolescence to soundtrack a movie about adolescents. Swift has written evocatively and knowingly about teenage conflicts and confusions — the intensity of young love, the reassurances of friendship, the stormy passage of adulthood — which are issues addressed by scores of young-adult novelists, who lately have been turning them into metaphors involving werewolves, vampires and other supernatural phenomena. Few novelists are quite so ambitious in this undertaking as Collins, who sets the three “Hunger Games” books within a post-apocalyptic totalitarian state where teenagers are forced to fight each other in the name of entertainment and political oppression. Swift’s music may be apolitical, but she knows how the metaphor works and, more important, why it’s proved so popular with young readers.

But in 2012, “The Hunger Games” seems a bit old-fashioned for investing so much in a blockbuster soundtrack. Produced by Burnett, it includes new songs from the Arcade Fire, the Decemberists, Miranda Lambert with the Pistol Annies, Maroon 5, Kid Cudi and the Civil Wars, among others. Very few contemporary soundtracks prove quite so ambitious, not only because consumers have stopped buying them but also because studios and labels are no longer producing these tie-in albums.

Film has always enjoyed a close relationship to pop music, as each bolstered the popularity of the other. The first talkie, of course, was a musical: In 1927, “The Jazz Singer” employed a synchronized soundtrack that not only made dialogue audible but provided sound for iconic hits like “My Mammy” and “Toot Toot Tootsie Goodbye.” Three decades later, “The Blackboard Jungle” made a smash hit of Bill Haley & the Comets’ “Rock Around the Clock,” helping to launch the rock and roll explosion. Studios and labels worked together to sell films with soundtracks and soundtracks with films, a trend that peaked in the 1980s with a string of multi-platinum tie-in albums, including “Top Gun,” “Beverly Hills Cop,” “The Big Chill,” “Footloose,” “Purple Rain," "Pretty in Pink" and “Dirty Dancing.”

During the next decade, that trend abated somewhat. “The Bodyguard” and “Titanic” sold well, “Singles” shone a spotlight on the then-burgeoning Seattle scene, and “Pulp Fiction” and “Natural Born Killers” innovated the genre by including not just carefully chosen older tunes but also sound snippets and bits of dialogue. A soundtrack could sell well based solely on one song: Take “Benny & Joon,” the 1993 Johnny Depp vehicle that packaged the Proclaimers’ “I’m Gonna Be (500 Miles)” with Rachel Portman’s nondescript score. That album’s success would be unthinkable in the digital era, when you could simply download the single (or grumble that the label had made it a soundtrack exclusive).

Perhaps the soundtrack’s last real hurrah was “O Brother Where Art Thou?” at the turn of this century. Despite the Coen Brothers’ tongue-in-cheek depiction of the Depression-era South, the album’s straight-faced revival of old rural blues, folk and gospel songs struck a mighty chord with listeners. Produced by Burnett and featuring a raft of artists who were far from mainstream (Gillian Welch, Ralph Stanley), the release sold millions and even won the Grammy for Album of the Year in 2001. More impressively, its influence still ripples through the industry, as acts like the Avett Brothers and Trampled by Turtles continue to draw from and update these same traditions.

But the days when every summer action movie or franchise entry had a hit album or single attached are long over. With the rise of file sharing and downloading, not to mention the downfall of MTV and other music video channels, most movies forego the expense of a star-studded soundtrack, placing less and less emphasis on pop music in movies. That trend seemed to reach a head this year when only two songs qualified for the Best Original Song Oscar. On the other hand, many films are putting renewed emphasis on composed scores, which has produced adventurous work by Trent Reznor and Michael Giacchino.

If anything can reverse this trend, it’s the young adult novel adaptation. When “Twilight” hit theaters in 2008, its tie-in album debuted at No. 1 on the Billboard album charts — the first soundtrack to do so since 2002. Other collections followed with each sequel, and while none sold quite so well as that first installment, they did prove especially successful by corralling indie-rock acts like Bon Iver, Lykke Li, Sea Wolf and Florence + the Machine. It was a boon to struggling musicians who could fund tours or albums based on the royalties.

The songs on the “Twilight” soundtrack were written and recorded specifically for the movies, usually to express a character’s emotions or side with Team Edward or Team Jacob, but aside from general moodiness, there’s no particular aesthetic unifying any of these albums into a whole. They could be mixtapes made by a lovesick teen with a particularly adventurous iTunes library. “The Hunger Games: Songs from District 12 and Beyond,” on the other hand, is “O Brother” for the tween set, and not only because it’s also produced by Burnett. More crucially, the soundtrack uses pop music to reflect the film’s setting and cultural/political themes. The heroine Katniss Everdeen hails from District 12, a rural outlier in what’s left of the United States following an ecological disaster and a bloody civil war. As Katniss observes in the first book in the series, District 12 is located in what used to be known as Appalachia, and its residents still mine coal hundreds of years later.

The soundtrack relies heavily on artists well versed in traditional Appalachian music to evoke this setting, which means bluegrass-fusion experts the Punch Brothers and African American string band Carolina Chocolate Drops rub elbows with the likes of rapper Kid Cudi and Maroon 5. The stark acoustic music represents District 12; the heavier, busier songs evoke the hyper-modernized Capitol. Sure, it divides the music into easy groupings, where spare and acoustic equals pure and good while electronic connotes urban and shallow. But at least “The Hunger Games” is even thinking about such differences rather than just throwing everything together in a hasty tracklist. No dry history lesson in old-time folk, it works more as an album than as a souvenir of a moviegoing experience. Which is exactly what any good soundtrack ought to do.