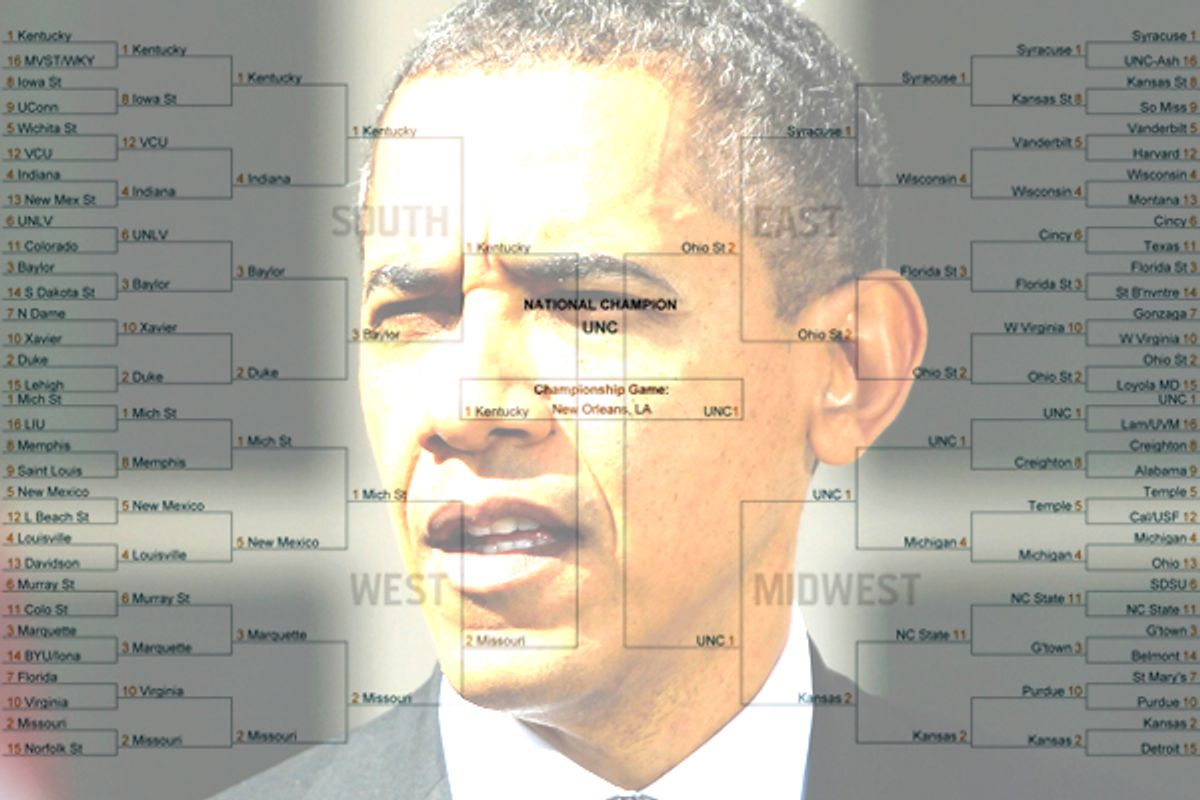 Obama's picks are, as usual, devoid of the sort of seismic upsets and unlikely runs by low-profile teams that give the tournament its flavor. His Final Four is composed of two No. 1 seeds, North Carolina and Kentucky, and a pair of No. 2's, Ohio State and Missouri. His champion, for the third time in five years, is UNC.

The lowest-seed he has reaching the Elite Eight is No. 3 Baylor, a talent-rich power conference team that didn't quite play up to its potential this year. The closest he comes to predicting a Cinderella run is his choice of North Carolina State, an 11-seed from the mighty ACC, to knock off Steve Fisher's San Diego State Aztecs and 3rd-seeded Georgetown before falling (to Kansas) in the Sweet 16. Beyond that, the only other upset of note that he's calling for is 12th-seeded VCU to beat No. 5 Wichita State in the first round -- not exactly a bold pick when you consider that VCU was a Final Four team last year and Wichita hails from the mid-major Missouri Valley Conference.

You might expect that the man who wrote "The Audacity of Hope" and whose own four-year rise from the Illinois state Legislature to the White House stands as one of the most impressive political Cinderella stories of all-time would have a little more faith in the underdog, but this is what happens every year. Obama's debut bracket in 2008 picked three No. 1 seeds for the Final Four. He also picked three in 2009, two in 2010 and three in 2011. The lowest seed he's ever placed in the Final Four was No. 4 Pittsburgh in '08, a decision that reeked of politics, since Obama was trying to win the Pennsylvania primary at the time.

In a way, Obama's brackets are a fitting microcosm of his presidency. We were initially conditioned to expect boldness, imagination and outside-the-box thinking, but by now we've realized that it's bland, utterly rational pragmatism that really drives him (with a dose of political calculation thrown in). His selections typify the "Favorites Bracket" that the New York Times' Mike Tanier describes in his amusing typology of brackets.

Of course, there's something to be said for cool, analytical judgment, in both bracketology and politics. As uninspiring as it is, Obama's addiction to chalk helped him correctly pick three of the Final Four teams in '08, and the national champion (UNC) in '09. The old horse track saying is that you'll go broke playing favorites, but it's also true that they win a lot. In the same spirit, engaging in some very uninspiring compromising and deal-making has helped Obama rack up some significant achievements as president, like healthcare.

But then there are moments like last spring, when teams seeded No. 11, No. 8, No. 4 and No. 3 all made the Final Four -- the highest total seed combination in the event's history and an incurable optimist's dream. But Obama hadn't believed in any of them; his bracket had all four top seeds making it instead. The story of his bracket history is the story of his presidency: There have been successes and there have been failures -- but not for the reasons we would have expected when we first met him all those years ago.