The Postal Service faces a threat greater than email or economics: Politics 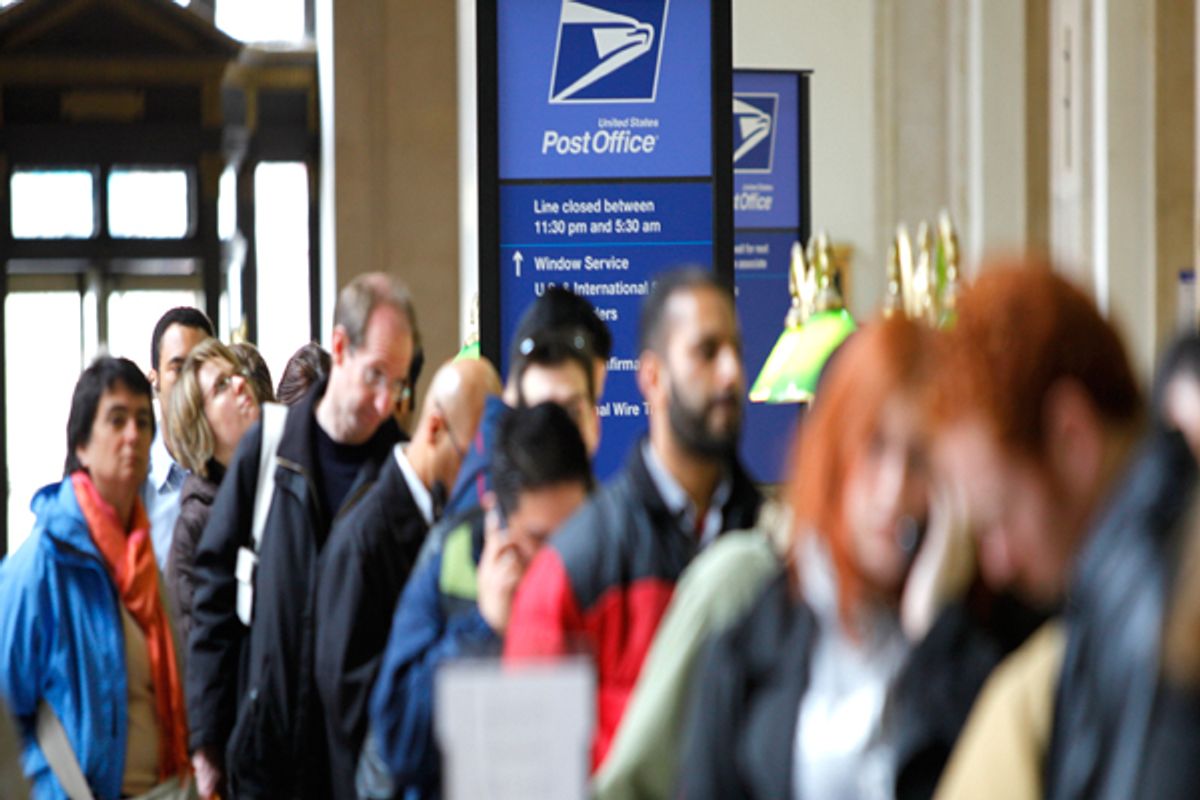 After a stopgap measure last year, Congress will once again debate whether the United States Postal Service as we know it can survive.  The better question is: Will Congress let it?

The U.S. Postal Service is at risk of defaulting on healthcare obligations or exceeding its debt limit by the end of the year. Last month, USPS management unveiled a “Path to Profitability” that would eliminate over a hundred thousand jobs, end Saturday service and loosen overnight delivery guarantees. The Postal Service also proposes to shutter thousands of post offices.  “Under the existing laws, the overall financial situation for the Postal Service is poor,” says CFO Joe Corbett.  Republicans have been more dire, and none more so than Oversight Committee Chairman Darrell Issa, who warned of a “crisis that is bringing USPS to the brink of collapse.”

Listening to Issa, you’d never know that the post office’s immediate crisis is largely of Congress’s own making.  Conservatives aren’t wrong to say that the shift toward electronic mail – what USPS calls “e-diversion” – poses a challenge for the Postal Service’s business model.  (The recent drop-off in mail is also a consequence of the recession-induced drop in advertising.)

But even so, in the first quarter of this fiscal year, the post office would have made an operational profit, if not for a 75-year healthcare “pre-funding” mandate that applies to no other public or private institution in the United States.

Warren Gunnels, aide to Sen. Bernie Sanders, calls that mandate “the poison pill that has hammered the Postal Service … over 80 percent of the Postal Service deficit since that was enacted was entirely due to the pre-funding requirement.”

This death hug was part of the Postal Accountability and Enhancement Act, which was passed on a voice vote by a lame duck Republican Congress in 2006.  As I’ve reported, the mandate required the Postal Service, over 10 years, to pre-fund healthcare benefits for the next 75.  This unique burden costs USPS $5.5 billion a year. The new law also restricted the Postal Service’s ability to raise postage rates, or to provide “nonpostal services” that, in an e-diversion era, could be key to its future.  American Postal Workers Union president Cliff Guffey says the bill was designed “by those people who hate government … to destroy the Postal Service.  And that’s what they did.”

The Postal Service has long been required to provide “universal service”: delivering to all 151 million addresses in the United States. Conservatives promise that private companies could serve the Postal Service’s function more efficiently, but when it’s their money on the line, the private companies themselves aren’t always so sure. Some of the packages sent through UPS or FedEx are actually delivered by the Postal Service, because those companies save money by contracting with USPS to serve more remote customers.

The Postal Service fulfills its mandate without direct government funding.  Faced with right-wing warnings about bailouts, the postal worker union this week is running a new round of TV ads reminding taxpayers that USPS is funded entirely by fees, not taxes.  Guffey says the union -- the largest of four representing post office workers -- will likely hold rallies on next month’s Tax Day to drive home the same point.

Issa and other Republicans have been insisting for years that to stay solvent, USPS needs to make big cuts. In 2010, Issa told the postmaster general at a congressional hearing that the Postal Service has “more or less a third more people than you need. He  warned in an Op-Ed that “Allowing USPS to postpone billions in obligations just makes a bailout easier.” In a December Op-Ed, Issa compared continuing Saturday mail service to “asking us to revive the Pony Express.”

Instead, Issa proposes creating a new board that, in the event of default on pre-funding or any other Postal Service obligation, would be empowered to override union contracts and managerial decisions for years.

Elijah Cummings, the Oversight Committee’s ranking Democrat, says for union members who just ratified a contract last year, that would be “a slap in their face … particularly when you have unions who have worked very hard and in a very cooperative manner to help to right-size the Postal Service employee force.”

Cummings also voices concern over USPS management’s proposed cuts to jobs and services.  While agreeing reductions are necessary, he says, “I don’t think they would do it with the compassion that I would.”  As for ending Saturday service and changing the overnight guarantee, Cummings warns, “We have to be careful that we don’t do things that push even more people away from using the postal service.”  Corbett acknowledges that such changes will cost customers, but says that after factoring in such losses, USPS projections show it will still save billions of dollars.  “It only makes sense,” says Corbett.  “Any financial enterprise would do it.”

Twenty-six Senate Democrats, plus Sanders, have signed a letter raising similar concerns about service cuts and calling for an alternative approach: ending the pre-funding mandate, allowing the Postal Service a refund on billions in overpayments to pension funds, and allowing and encouraging USPS to diversify its services.  In a TV interview last month, Sanders suggested that diversification could include shipping alcohol and providing notary and licensing services.  (Last year, USPS commissioned a report from Accenture that examined diversification strategies in other countries and estimated that such an approach could have brought USPS $74 billion from 2003 to 2008.) By contrast, Sanders warned that the USPS management’s proposed cuts would mean “a death spiral” as customers are driven elsewhere.

Sanders is among the backers of the Postal Service Protection Act, whose recommendations are similar to the ones in the senators’ letter. Guffey says the most promising route to an acceptable compromise would be for these recommendations to be incorporated into a tri-partisan bill introduced by Sens. Joe Lieberman, Tom Carper, Susan Collins and Scott Brown.

Among USPS management’s proposed changes are a transformation of workers’ healthcare plans and the elimination of at least 155,000 jobs.  USPS has already eliminated 130,00 full-time equivalent positions in the past three years.  In a union contract signed in May 2011, APWU agreed to concessions in order to preserve its “no-layoff” clause; Guffey says that the Post Office’s projections, designed to make the case for further sacrifices from workers, fail to factor in savings from the concessions they’ve already agreed to.  Union leaders expressed surprise last year when, within three months after signing the new contract with APWU, USPS issued white papers in support of congressional proposals to override those layoff protections.  But Corbett says he believes the reduction can be accomplished through voluntary incentives.

Cutting those jobs would mean further reductions in public sector employment, including among veterans and African-Americans, who for decades have been over-represented in Postal Service ranks.  “It just doesn’t seem like it’s the right time to go after veterans and their employment,” says Guffey. He wants Congress to maintain current delivery standards, which he says would save many post offices from closure.

Cuts have intangible costs as well.  Interviewed for a Washington Post profile of the endangered post office in Star Tannery, Va., one resident said, “Closing the post office would be one step toward eradicating small-town life in America.”

True to form, President Obama falls between Sanders and Issa: He would scale back the pre-funding requirement and allow postage rates to rise, but would also back the elimination of Saturday service. In an emailed statement, White House spokesperson Matt Lehrich wrote, “The President proposed a balanced plan that would return USPS to financial viability while saving taxpayers money, and Congressional action that enacts this type of balanced plan is necessary.”

If you want a measure of the narrowness and conservatism of our politics, consider this: In a still-weak economy, with a recovery slowed by historic public sector layoffs, not even Bernie Sanders, the self-identified socialist senator, is proposing that the public good of universal delivery get a public subsidy.  Instead, the range of debate is over how Congress should let the Postal Service fund itself: allowing it to raise rates, diversify services and cease funding benefits decades ahead of time; or letting it slash jobs and services.  Since most of these proposals require legislative change, any deal will have to make it past filibuster-happy Senate Republicans and John Boehner’s House of Representatives.  That political reality – more than technology or economics – is the greatest immediate threat facing the Post Office.