"Jiro Dreams of Sushi" is a gorgeous film that documents a master chef’s dedication, and its darker side 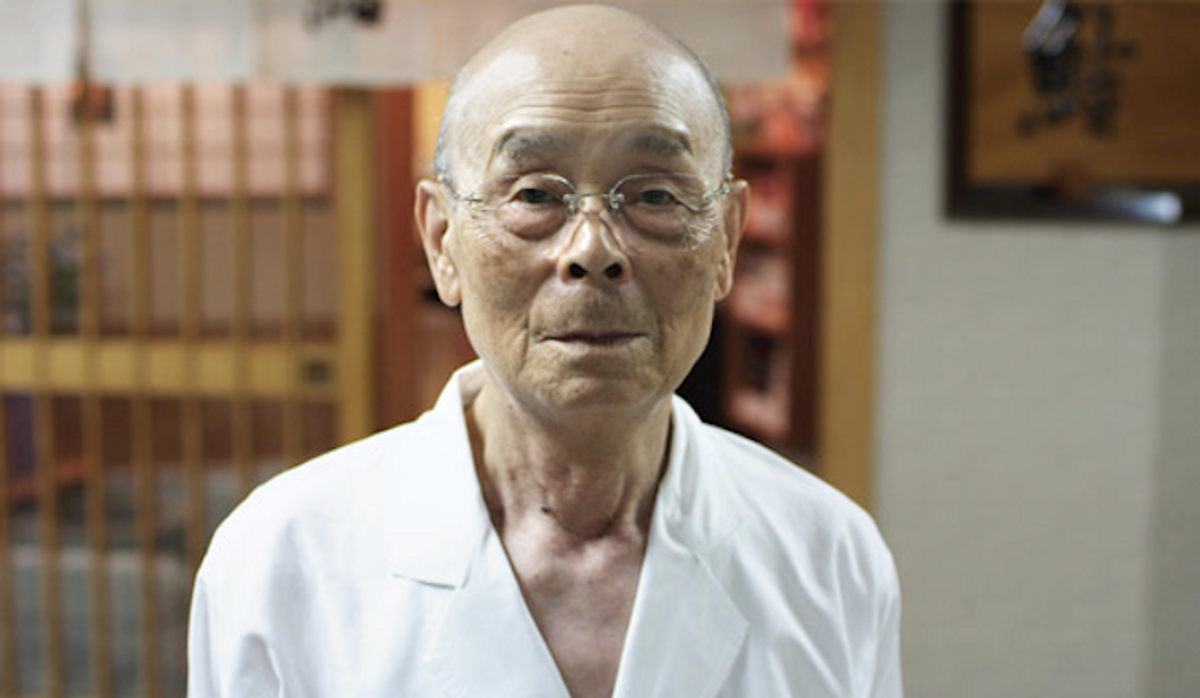 A friend of mine once met a delegation of revered Japanese chefs. There was a wizened gentleman among them who was clearly the leader. He spoke little, but the other star chefs deferred to him, paid him obvious respect. My friend finally asked, quietly, “So, what does the old guy do?” The response: “He has mastered rice.”

To be honest, I don’t know what that means. I mean, I know the difference between a pot of rice that I like eating and a pot that’s gluey, but there aren’t a whole lot of points between the two. And yet here is a man whose claim to fame among master chefs is that he makes rice better than the rest of them, and to accept that is to accept that there is a level of cooking that most of us will never comprehend. At some point, cooking is not a matter of skill; it’s a matter of understanding, of learning to see the differences between one perfectly good pot of rice and another, of the minute details in something that, for most anyone else, is pure pearly blandness. Truly great cooking is, in this way, first an act of learning to see, and then a striving to do. This is why, among chefs, the truism is that simple food is hard.

Sushi, of course, is the ultimate in simple food: Mostly just rice and a piece of raw fish, it would seem that anyone with a knife and one functioning hand can make it. But take an impossible eye for detail and apply it to fish—Where did it come from? How long should you age it before serving for best flavor? How long should you massage it to make it tender, but still have texture? Where should you cut a piece from, and at what angle, to highlight the flavors of different parts of the muscle? Since temperature affects aroma, how warm should you let the fish get in your hand before serving it? How hard do you press the fish into the rice to form a bite that has integrity, but is not dense?—and you begin to see where a simple food is not so simple. You don’t have to buy into all the minutiae a sushi master trades in to know that the pleasures of great sushi span from the animal to the emotional and the intellectual, which is a great trick for anything to pull off, let alone a piece of raw fish on rice.

What animates a sushi master? What drives someone to be so focused, to be a god of small things?

Jiro Ono, 85 years old and counting, is a revered sushi chef who runs a restaurant inside a Tokyo subway station, and "Jiro Dreams of Sushi" is easily the best, most beautiful movie about sushi you will see this year, or, let’s face it, probably any other. The film is part documentary bio-pic, part food-blogger’s wet dream. (OMG, did you see the super-macro shot of that tuna??!? NOM NOM. Etc.) It doesn’t take us into the world of technique: Jiro has mastered rice, too—his rice dealer claims that he doesn’t bother to sell his best stuff to anyone else because they wouldn’t know what to do with it—but while he describes how he does it, the film never shows us the whys and what-fors of his method. (Though, as Silvia Killingsworth reports for the New Yorker, the French-American star chef Eric Ripert describes Jiro’s rice as “tasting like a cloud.”)

Instead, the movie focuses on the life of a man who is utterly devoted to his craft. Jiro doesn’t have a secret to why his sushi is more astonishing than anyone else’s. What he says, over and over, is that great sushi—and, by extension, greatness itself— is the result of hard work, of dedication, of a commitment to excellence that, in the end, trumps everything else in life.

His search for perfection is eternal.  At 85, he hasn’t stopped working; he says he hates holidays because they are too long to spend away from the restaurant. Chefs, in particular, who have seen the film don’t hesitate to call it “inspiring.” To watch the gorgeously shot scenes of him forming pieces of sushi, jewel-like and dripping with soy sauce and life, is to wish that you might one day make so much beauty. (Indeed, a film critic friend said that her reaction to seeing this was not hunger, but to want to go home and make jewelry.)

Still, there is another side to this mastery, to this inspiring devotion. Jiro has two sons, and it’s hard to tell exactly what their relationship to each other is, or to their esteemed father. The master admits to not being at home when they were young, telling a story of how one day he slept in, and his children complained to their mother that there was a strange man in the house. The younger one seemed, at first, to be the favorite, because the father helped him open his own restaurant. The older son, Yoshikazu, is still an apprentice to the father ... at 50. But Jiro tells the camera, with a laugh, that when he helped his younger son open his restaurant, he told him, “Now, you can never come home again.” As he recounts his own life, leaving his home to begin his career at 9, it’s not clear that he was kidding with his kid.

With an inflection of either humble pride or resignation, Yoshikazu says that in Japan, it’s the oldest son’s role to take over for the father. He works dutifully; he has taken over the selection and buying of fish since Jiro had a heart attack 15 years before. He, not the acclaimed master, was the one who served the inspectors who granted Jiro three Michelin stars, the highest recognition in the restaurant world. And yet, Jiro’s restlessness keeps his son forever in his shadow, unwilling to let him stand for himself.

“You must fall in love with your work,” Jiro says. He refers to himself as a shokunin, literally an “artisan,” but more accurately someone who commits the entirety of himself to his work. It’s a term with gravity; you won’t find shokunin bread in the grocery store. One of his young apprentices wells up when he tells the camera of how he finally earned the term from his master. It was after he’d worked for Jiro for 10 years. He’s signed up for a life of dignity and honor and hard work. He’s signed up for the life of Jiro’s sons, men who may or may not have their own sons to mentor and pass their restaurants down to. He’s signed up for a life given—or lost?—to the making of beautiful things.