The Trump sons go on safari -- and prey on the weak and helpless for fun. Sound familiar? 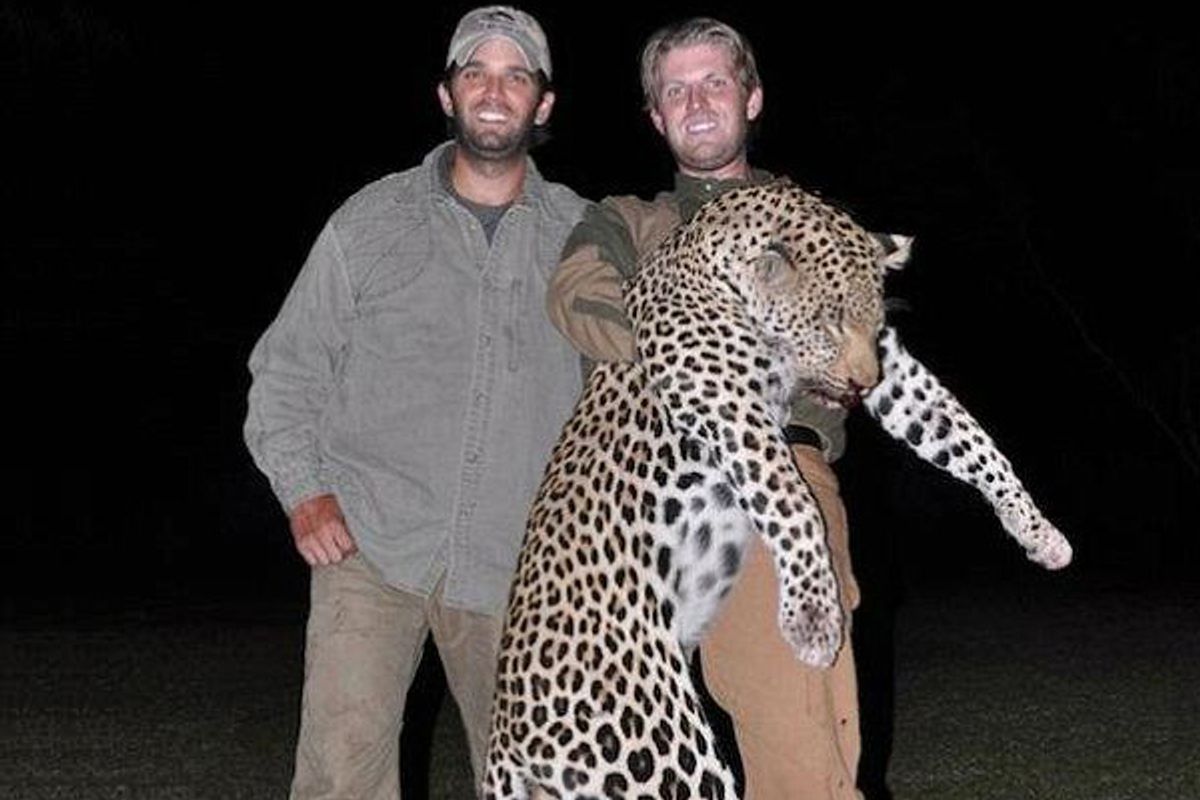 How arrogant and out of touch are Donald Trump's sons? Let's put it this way – this is a story in which their father comes off as the subtle, nuanced thinker.

It seems Donald Jr. and his brother Eric went to Africa on a hunting trip last year, and their tour company, Hunting Legends, decided recently to brag of the men's prowess on their Web site, complete with graphic photos of the brothers and their kills. And here's a shocker – there's something about rich white men smiling with the carcasses of the African animals they've killed that a lot of people just don't like.

The photographs are intense – images of the men proudly hoisting a dead leopard, smiling and holding a sawed off elephant's tail next to the animal's body, posing with a dead bull and waterbuck and an enormous, strung-up crocodile.

PeTA unsurprisingly jumped at the opportunity to get a little free press from the episode, sending out a statement that "Like all animals, elephants, buffalo and crocodiles deserve better than to be killed and hacked apart for two young millionaires’ grisly photo opportunity." And even Donald Sr. told "Access Hollywood," "I've never liked it (hunting). I've never liked that they like it... I'm going to talk to them about it. I'm not a fan of the whole situation."

Yet the younger Trumps stand by their actions. In a joint statement, the brothers defended themselves, explaining, "We are both avid outdoorsmen and were brought up hunting and fishing with our Grandfather who taught us that nothing should ever be taken for granted or wasted. We have the utmost respect for nature and have always hunted in accordance with local laws and regulations. In addition, all meat was donated to local villagers who were incredibly grateful. We love traveling and being in the woods — at the end of the day, we are outdoorsmen at heart."

Those of us who eat meat-- and have respect for cultures where hunting is necessary for survival – understand that the cow that made your lunchtime burger didn't peacefully stroll onto your plate. Most of us are deeply disconnected from the vivid reality of slaughter. The animals we eat had to die, and that means somebody had to kill them. So if the Trump brothers' escapade put food on the table for the locals, is that such a bad thing?

In and of itself, it's not. The Hunting Legends site, which says that "Africa is God's country" and that "God doesn't bless mediocrity, he blesses excellence," would like to dispel the image that "To often we as hunters are critisized and referred to as killers." [sic] Hunting Legends says its efforts instead play a role in conservation and wildlife population control. "We create jobs for local hungry people, we feed them," the company says. It also, tellingly, explains that guests "hunt our old & mature male animals, which are beyond their prime productive time."  But if you want to shoot an old leopard, it won't come cheap – rates for the experience are around $750 a day and the leopard will run you seven grand. The company will decorously share the cost of an elephant or crocodile upon request.

But there is something wildly smug about the Trumps' mention of how "grateful" the "villagers" were for their bounty – a sense that the poor natives were lucky those big strong millionaire's sons came along to feed them. And their noblesse oblige doesn't play so well when Trump Jr. retweets a fan's sentiment that "Most of the people hating on you is because you are young, rich and successful. ... rock on!"

There's nothing wrong with feeding people, and wildlife conservation does, realistically, sometimes include population control. That's a fact of life whether you're in Zimbabwe or the Trump's playground of Manhattan. But if you want to feed those locals, maybe you could just, I don't know, let them do the hunting. And if you call yourself "avid outdoorsmen" when you're really just picking off the weak in a theme park for geriatric mammals, you're just pathetic.