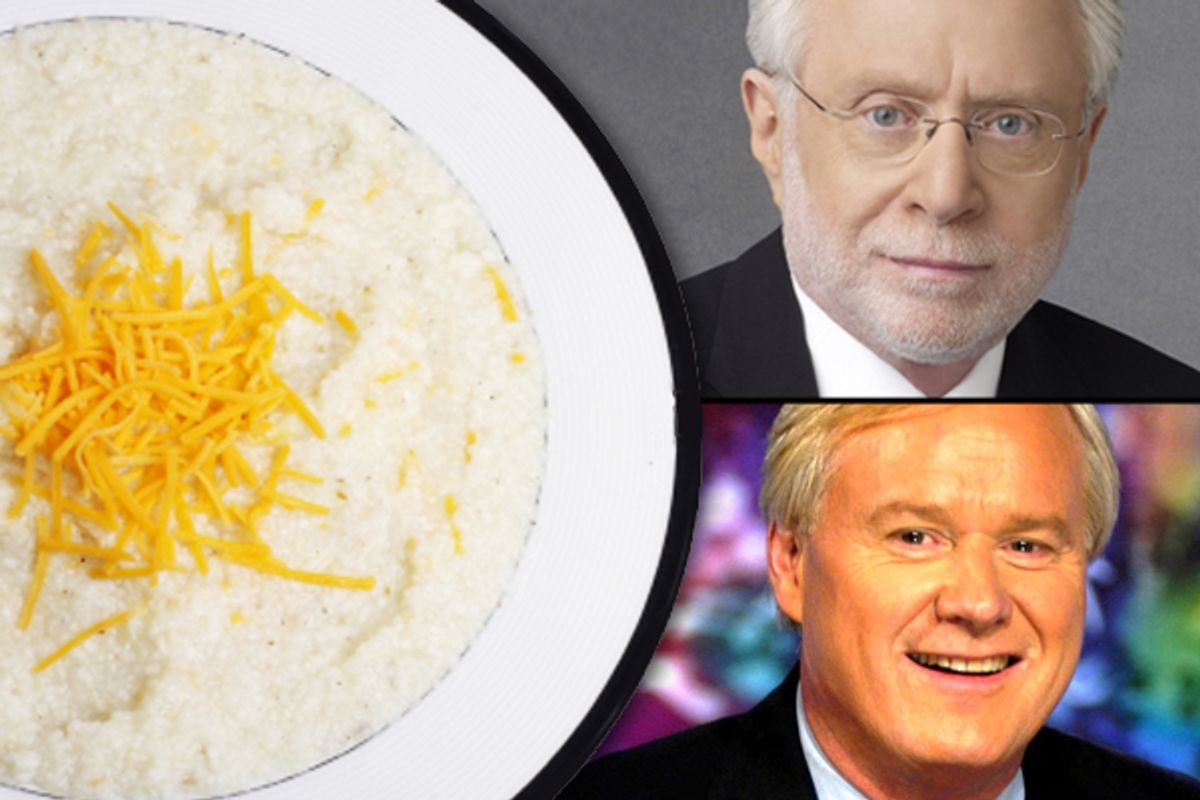 Cable news pundits might have the largest gap of anyone in the world between "think they're funny" and "actually funny."

Usually it's easy enough to roll your eyes when Lawrence O'Donnell -- as he did last night on MSNBC -- grabs onto a "three-way" reference to describe the Republican campaign, and then makes the joke again and again and again (hey, three times!), like a very naughty child who is very pleased with himself.

But then there's a meme like "cheesy grits" -- the new breakfast of choice for Mitt Romney when he's in the South. The race to air the awkward Romney clip the most times is still ongoing, as is the battle to make the most tortured metaphorical connection between cheesy grits and the former Massachusetts governor's failure to connect with Southern voters.

More embarrassing is the fact that each pundit who attempts the metaphor seems to think that he or she is super-clever and the first one with the idea -- proving that even the people who produce news 24 hours a day aren't watching this stuff.

Here are some of our favorite cheesy discussions of cheesy grits from coverage of the Alabama and Mississippi primaries. And yes, there are doozies from Wolf Blitzer and Chris Matthews.

Jamal Simmons: Poor guy, only the second time he's had catfish ever and cheesy grits and a biscuit -- it's almost as if we're watching Mitt Romney on safari in his own country. (Australia Broadcasting Company)

Jan Crawford: Now as any Southerner will tell you, Romney didn't quite get it right on the grits. It's cheese grits, not cheesy grits. But grits and gravy like Gingrich said? Listen, I grew up in Alabama. you put butter on grits. Gravy goes on biscuits. But despite this gravy issue, people here seem to be cutting Gingrich a lot of slack, Erica and Charlie. They think he is smart, he's visionary, and they like that he can take on President Obama. (CBS)

Mary Matalin: Quit trying. Quit trying. I like the cheesy grits. Just do what you do well, which is be kind of a sort of a bad candidate, but a good leader, and just stay on message. That's it. (CNN)

*
John McCain: I think it's very possible that Mitt Romney may win both Alabama and Mississippi tonight, putting to rest that myth that he can't -- that he can't succeed in Southern states. By the way, I'm sure it's because he's grown to like grits... (CNN)

*
John King: All these guys are with us all night long. We're going to make cheesy grits late tonight. (CNN)

*
Ashleigh Banfield: I was just going to say, the cheesy grits.

Malveaux: There's been a lot of talk.

Blitzer: I'll be honest, I have tasted them over the years, but I can't say I'm a major grit eater.

Malveaux: There's a lot of talk about cheesy grits and catfish, and this is coming from Mitt Romney.

Blitzer: I'm sure it's delicious.

Malveaux: It is delicious. I grew up on grits.

Terri Sewell: He can't even get the fact we have cheese grits, not cheesy grits. So, I agree with you that he is pandering to what he thinks Alabama voters are about, Mitt Romney, and not to what we actually are concerned about.

Al Sharpton: She is authentic. She's there in Birmingham, still has on her very nice necklace and her nice attire. She didn't come home with a bowl of grits tonight playing with me.

David Corn: She is a great reporter, though.

Erin McPike: I had grits and a biscuit for breakfast this morning. I tell you I did.

Corn: Bring some back.

Chris Matthews: What about all this "y'all" crap of his? Is it going to work?

Matthews: Does it work if you go down there and pander?

Lott: Well, you know, look, eating a little catfish and some grits, whether you call them cheesy grits or whatever...

Matthews: But it is cheese grits, not cheesy grits, right?

Lott: Well, they may have had it on the menu, "cheesy grits." It may have had a little extra portion. I don't know. But ordinarily, you say cheese grits, yes.

Matthews: And then there's Po Boys down there.

Breaux: And they're great.

Lott: And you know, if he'd go in there and eat a Po Boy and eat it at Mother's, he'd be a better candidate. (MSNBC)

Greg Gutfeld: I think it was a stripper I met in (the) Alamo.