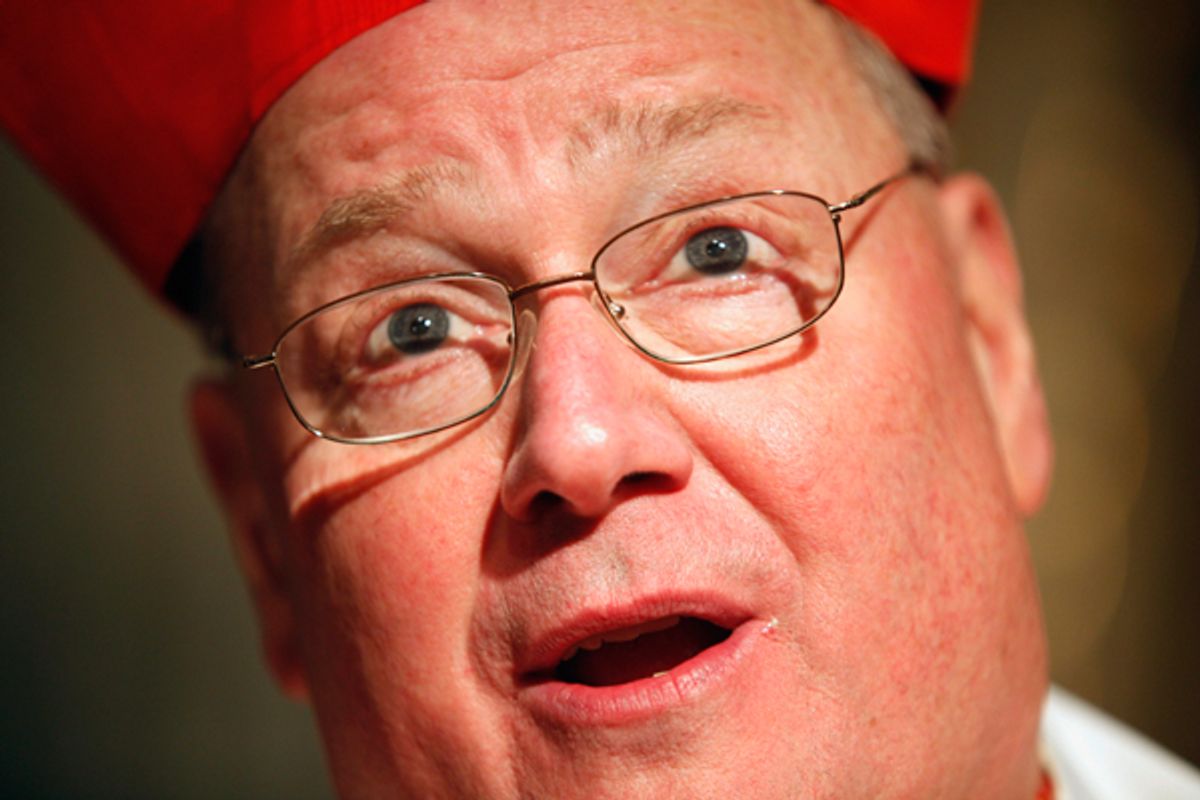 What about my liberty to tell you what to do? (Reuters/Allison Joyce)
--

The U.S. Conference of Catholic Bishops held an administrative meeting in Washington Tuesday and Wednesday, after which they vowed to "continue our vigorous efforts at education and public advocacy on the principles of religious liberty."

In the run-up to the meeting, the president of the Bishops’ Conference, Cardinal Timothy Dolan of New York, penned an unambiguously bellicose letter to his fellow bishops on March 2, stating, “We have made it clear in no uncertain terms to the government that we are not at peace with its invasive attempt to curtail the religious freedom we cherish as Catholics and Americans. We did not ask for this fight, but we will not run from it.”

Bishop William Lori, the chairman of the Bishops’ Ad Hoc Committee on Religious Liberty and star of the all-male Republican hearings on “religious freedom,” mildly told the Religion News Service that the bishops “are not looking for a fight with the administration.” Although the statement they issued after the administrative meeting employed softer language than Dolan's letter, the battle lines already have been drawn. The bishops didn't mince words: There will be no retreat from their efforts to persuade the public and policymakers and press their agenda in the courts and legislatures.

Some Catholics who early on helped drive the bishops’ agenda are having second thoughts, but just about the conference’s overheated rhetoric. Michael Sean Winters and E.J. Dionne, two Catholic Democrats who played a crucial role in elevating the bishops’ complaints about the contraception coverage requirement, are now giving cover to some of the bishops’ policy demands, even as they scold them for their bombast.

Winters, whose recent book about how a religious fundamentalist named Falwell shaped the modern GOP is drawing attention from liberal groups, has his own religious intentions for the Democrats. After warning in January of a political apocalypse for Obama should he fail to relent to the bishops, Winters this week pleaded with them to dial back their jeremiad. Dionne, for his part, warned the bishops not to become “the Tea Party at prayer.” Winters lamented that the Bishops' Conference “has made a hash of things since the President announced his accommodation.” (Winters and Dionne want, in a word, the bishops to be attractive to Democrats rather than Republicans. But it is, no doubt, too late.)

It may be too late for Winters to curry favor with his fellow Democrats, too, since he declared after the administration announced, on Jan. 20, that all employers, save houses of worship, would have to provide the contraception insurance coverage, that President Obama “lost my vote yesterday ... The issue of conscience protections is so foundational, I do not see how I ever could, in good conscience, vote for this man again.”

This was intended, of course, as a shot across the bow, an ominous warning that the elusive Catholic vote could slip through the Democrats’ fingers. Dionne, who initially said Obama had “botched” the decision, argued this week, “the bishops have legitimate concerns about the Obama compromise, including how to deal with self-insured entities and whether the wording of the HHS rule still fails to recognize the religious character of the church’s charitable work.”

Winters also contends the accommodation is “insufficient, most obviously because it fails to deal with self-insured Catholic institutions but most worrisomely because it leaves in tact [sic] the classification of exempt organizations that draws a distinction between houses of worship and religious ministries.”

But the bishops and their allies want to take the objection much further than exemptions for the self-insured institutions. Winters, for his part, acknowledges that federal law already treats houses of worship differently: Houses of worship have always been exempt from the contraception coverage requirement, and in other areas of the law, they are exempt, for example, from filing tax returns. Religiously affiliated institutions that are not houses of worship, though, are treated just like secular ones for these purposes. Winters argues that they, too, should be treated like houses of worship, an outcome that would have implications across the large number of charities, social services organizations, hospitals and educational institutions that are affiliated with the church or identify as Catholic.

At the Conference of Bishops’ blog, Sister Mary Anne Walsh complains that the Amish as well as Christian healthcare-sharing ministries received exemptions from the individual mandate in the Affordable Care Act, but Catholics can’t receive an exemption from the contraception coverage. She seems to have some regrets: “If only we objected to health insurance generally, we might be able to enjoy the same protection.”

The bishops, though, were apparently too busy lobbying against the nonexistent abortion coverage in the healthcare reform bill to notice that healthcare-sharing ministries were lobbying for an exemption from the individual mandate entirely. (Take note, too, of religious organizations’ exemption from the Lobbying Disclosure Act, so we don’t know even the minimal amount of information about their lobbying activities secular organizations are required to disclose.) It’s precisely these sorts of religious exemptions, tucked away in expansive pieces of legislation like the Affordable Care Act, that chip away at a secular government and create two sets of rules: one for the religious entities with lobbyists and one for everyone else.

Religious exemptions, and separate sets of rules, have a ripple effect. An example: Thanks to the efforts of the American Legislative Exchange Council (ALEC), healthcare-sharing ministries are exempt from insurance regulations in many states. Because of the exemptions, consumers of HCSMs lack the protections and legal recourse the regulations provide. We may never how some healthcare-sharing ministries affect consumers because their contracts prohibit members from suing them in court, requiring religiously based arbitration instead.

At least consumers choose to join a healthcare-sharing ministry. Employees of religious institutions do not choose to adopt the institution’s religious faith. If you work at a Catholic institution, you should be forced, the bishops contend, to live with their religious edicts, because doing otherwise violates the employer’s religious freedom.

But as Jewish historian Jonathan Sarna showed at the Forward recently, this elevation of the supposed religious freedom rights of employers has a coercive effect on their employees. By refusing an exemption to employers, Sarna writes, the government “reasonably assumes that employers and employees both have First Amendment rights, including the ‘no establishment’ right not to be religiously coerced.”

The bishops, though, argue that the government is coercing them. They point to a recent decision by the U.S. Supreme Court in Hosanna-Tabor Evangelical Lutheran Church and School v. EEOC, which unanimously held that employees who meet a denomination’s own definition of “ministerial employee” may not sue for wrongful termination under employment discrimination laws. Cardinal Dolan, in his letter, seems to think this ruling, seen by constitutional experts as narrowly limited to the circumstances of the case, would permit the church to unilaterally expand its own exemptions: “the Supreme Court unanimously defended the right of a Church to define its own ministry and services, a dramatic rebuff to the administration, apparently unheeded by the White House.”

Congressional Republicans might see bills like the Blunt Amendment — which, if passed, would have allowed any employer to opt out of covering any medical care to which it had a moral or religious objection — as too risky for an election year. But the bishops and their Catholic and evangelical allies are bound and determined to continue their battle, as polemicists and lobbyists, as litigators in court and in the court of public opinion. Their sights are on contraception coverage at the moment, but in the long term, they are eyeing much more.

Among other things, they've signaled their intent to demand exemptions from federal contracting requirements that their services to sex trafficking victims or HIV/AIDS patients not include full reproductive care, and have consistently raised, even in the face of exemptions for houses of worship, religious freedom objections to same-sex marriage laws. In the bishops' minds, they are victims of a meddling government that seeks to denigrate their religious raison d'être, and after this week's meeting they've reiterated, once again, that will continue to "protect the religious freedom that is rightly ours." If exercising this "religious freedom" prevents other people from exercising theirs, the bishops don't much care.