Give up your bank for Lent 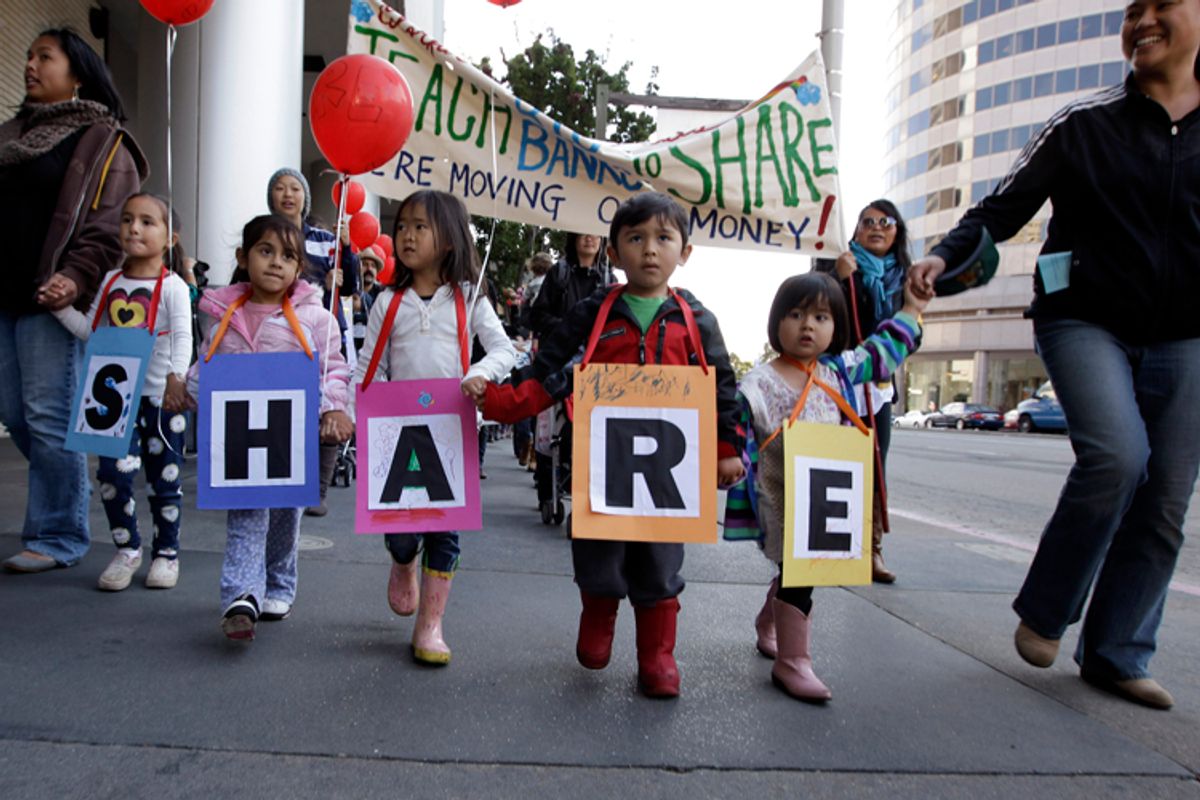 Occupy Wall Street demonstrators march to a Wells Fargo Bank as part of the protest in downtown Oakland, Calif., Friday, Nov. 4, 2011. Two mothers withdrew their savings from the bank. Saturday is Bank Transfer Day for supporters to take their money out of major banks and put their money into smaller banks. (AP/Paul Sakuma)
--

Growing up Protestant in a small town in upstate New York, the commemoration of Lent was not as major an event as it would be in, say, a Catholic household. We didn’t give up chocolate or gum or anything else for those 40 days between Ash Wednesday and Easter, nor did most of the grown-ups we knew forsake any of their particular pleasures or bad habits.

When I was 12, one night a week during Lent was spent in religious training before becoming a member of our church at a service on Maundy Thursday (what Catholics and many others call Holy Thursday, the day of The Last Supper). But baptism was a prerequisite for membership and I had not yet been christened in the Congregational Church we attended; neither had my parents or my younger brother and sister. So all five heathens were lined up in the living room one Monday evening, and our minister quickly did the deed with a glass of tap water. Then we had cake.

My other powerful memory of the Lenten season is weekly religious breakfasts on cold Wednesday mornings. I was in high school and it meant waking up even earlier than usual on frigid winter days and getting a ride to the parsonage.

Yawning protests to the contrary, those meals were worth it. In that big, white-framed house, we were greeted with the sweet maternal warmth of the minister’s wife, enormous platters of food, and a brief talk by the minister on the Eastertime meaning of it all, preaching repentance and redemption but suffused more with brightness than brimstone. Afterward, each of us walked the few remaining blocks to school, our breath in frosty flumes, full of bacon, scrambled eggs and a certain pious self-satisfaction. No fasting for us.

All of which came to mind while learning that today, some churches are taking matters into their own hands and delivering one of the most powerful Lenten messages ever. According to the progressive website ThinkProgress, “As congregations across the country observe the period between Ash Wednesday and Easter by sacrificing and repenting, religious leaders are asking big banks that have wrongfully foreclosed on homeowners and exacerbated the pain of the housing crisis to do the same.”

On Ash Wednesday, churches in San Francisco announced they were removing $10 million from Wells Fargo and called on the bank, as per the advocacy group Faith in Public Life, “to put an immediate freeze on its foreclosures and repent for their misconduct.” The March 9 New York Times reported that “The Rev. Richard Smith of St. John the Evangelist, an Episcopal church in San Francisco, likened the divestment campaign and public protests to early Christianity’s ritual of ‘reconciliation of the penitents.’ Far from taking place in the private sanctity of the confessional, that rite occurred in public, with the penitent overseen by a priest and required to present himself before a bishop.”

“’It seemed like a parallel to us,’ said Mr. Smith, 62. ‘Our banks have done a great deal of damage in a very public way. So it seems appropriate as we enter into a season of penitence that we invite those who separated themselves from the community to repent with us. It’s basically ‘Ethics 101.’”

The effort is part of several national campaigns to get consumers and community groups to remove their money from the big banks and transfer accounts to credit unions and smaller financial institutions. Travis Waldron at ThinkProgress wrote, “Religious organizations have been at the forefront of movements to get consumers to move their money. The New Bottom Line, a coalition of faith groups, pledged to move $1 billion this year, and before Thanksgiving, churches moved $55 million away from Wall Street banks with pledges to remove as much as $100 million more.”

Occupy Wall Street has been in the lead, as has the Move Your Money project – its website even includes a handy locator that lists credit unions and community banks near your zip code. On the November 5 “Bank Transfer Day,” some 40,000 moved their money out of the nation’s biggest banks, but according to the consulting firm Javelin Strategy and Research, the event actually had a much wider impact. In a January 26 report, Javelin estimated, “5.6 million U.S. adults with a banking relationship changed providers in the past 90 days. Of those switchers, 610,000 U.S. adults (or 11 percent of the 5.6 million) cited Bank Transfer Day as their reason and actually moved their accounts from a large to a small institution.”

The March 2 Los Angeles Times noted, “Consumers fed up with the rising tide of bank fees helped the nation’s credit unions more than double their number of new customers last year… More than 1.3 million Americans opened new credit union accounts last year, up from less than 600,000 in 2010, the National Credit Union Administration reported. That brings the number of credit union members to a record 91.8 million.”

As a result of all this, CNN Money reported last November, “The nation’s 10 biggest banks could stand to lose as much as $185 billion in deposits in the next year due to customer defections, according to cg42, a Wilton, Connecticut-based management consulting firm that has conducted research for several of the nation’s top banks.” Sounds like a lot, but keep in mind those same ten banks hold retail deposits of $2.04 trillion.

Nonetheless, public opinion and the post-meltdown, Dodd-Frank financial regulations have the banks and other financial institutions scrambling, while they continue to scream in protest and lobby on Capitol Hill against the ignominy of reform. On March 12, that $25 billion foreclosure abuse settlement was filed by the federal government and 49 states – Oklahoma was the holdout – with Ally Financial, Bank of America, Citigroup, J.P. Morgan Chase and Wells Fargo. Twenty billion of it will be used to give a break to military and the unemployed, reduce principal for delinquent or near default loans and refinance mortgages already underwater. Another billion and half will provide some small restitution to people whose homes were sold or foreclosed upon. But as the Associated Press pointed out, “About 11 million American households are ‘underwater’ on their mortgages, meaning they owe more than their homes are worth,” but the settlement “is expected to reduce loans for only about 1 million.”

We’re told that the banks, desperate when thrown a lifeline by taxpayers in 2008, are now stronger and better able to weather a crisis than they were. 15 of the 19 largest financial firms passed the Federal Reserve’s latest stress test. Regardless of whether we as individuals could survive, the test asks, according to The New York Times, “whether banks would have enough capital to weather a peak unemployment rate of 13 percent, a 21 percent drop in housing prices and severe market shocks, as well as economic slowdowns in Europe and Asia.”

“The Fed’s stress tests assumed that the 19 banks would be slammed with $534 billion of losses in just over two years. Even after such hits, most banks would emerge with adequate capital…” But one of those that failed was Citigroup, our third largest, the one that took the most government assistance during the meltdown – and this in the wake of last week’s announcement that in 2011 the bank paid CEO Vikram Pandit nearly $15 million in total compensation, including a cash bonus of more than $5 million, his first since the 2008 crash.

What’s more, the Times said the tests revealed to the Fed that, “In business loans — called commercial and industrial loans by bankers — Citi and U.S. Bancorp had the worst portfolios, while Wells Fargo and Fifth Third had the shakiest credit card portfolios. In commercial real estate, regional banks appear to be the most vulnerable.” Swell.

There’s still a lot to be angry about, still good reason to contemplate transferring your money or at least filing with the new Consumer Financial Protection Bureau if you have a complaint about your mortgage, deposit accounts or credit cards. As former Goldman Sachs executive director Greg Smith said in this week’s bombshell Times op-ed announcing his resignation, “It astounds me how little senior management gets a basic truth: If clients don’t trust you they will eventually stop doing business with you. It doesn’t matter how smart you are.”

Jeff Horwitz at the financial daily American Banker this week exposed J.P. Morgan Chase’s credit card services division, reporting that it “took procedural shortcuts and used faulty account records in suing tens of thousands of delinquent credit card borrowers for at least two years,” sparking an investigation by the Office of the Comptroller of the Currency. “The bank’s errors could call into question the legitimacy of billions of dollars in outstanding claims against debtors and of legal judgments Chase has already won, current and former Chase employees say.” As Rolling Stone’s Matt Taibbi observed, “Countless credit card borrowers would now have collection agents chasing them for money they did not owe,” and in some cases, according to a key witness, Chase actually owed the customer money.

Allegedly one of Chase’s more pernicious practices was “robosigning,” the mass production and signing of credit-related affidavits without any semblance of verification, an illegal shortcut similar to the one that plagued the mortgage market and one of the targets of a new report from the inspector general of the Department of Housing and Urban Development.

“Managers at major banks ignored widespread errors in the foreclosure process,” the Times reports, “in some cases instructing employees to adopt make-believe titles and speed documents through the system despite internal objections… the report concludes that managers were aware of the problems and did nothing to correct them. The shortcuts were directed by managers in some cases…” In one of the more blatant falsifications, a Wells Fargo employee whose prior work experience was at a pizza parlor was named a bank vice president.

Inspector General David Montoya said, “I believe the reports we just released will leave the reader asking one question — how could so many people have participated in this misconduct? The answer — simple greed.”

Simple greed – hey banks, how about giving that up for Lent?