"The Kid With a Bike": A heart-rending fable of good and evil 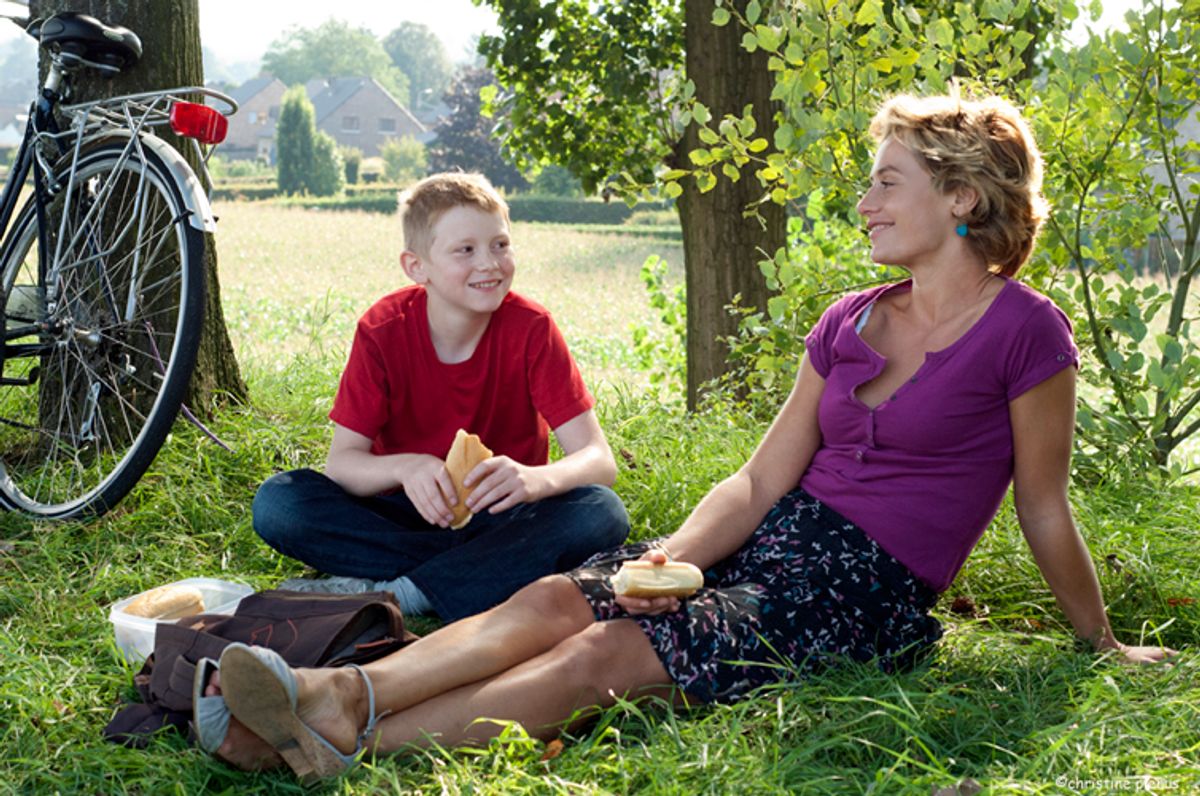 As anybody who's ever taken a film-history course knows, there's already a pretty famous European movie about a preteen boy and a bicycle. If Vittorio De Sica's 1948 neorealist classic "Bicycle Thieves" (in my day, and perhaps in yours, the English title was singular) is about a kid who has a father but must search for a lost bike, Jean-Pierre and Luc Dardenne's new film is about a kid who finds his bike but must search for his lost father. Whether or not you've ever heard of the Dardennes or their cinematic excursions into the social underbelly of Belgium's third-largest city, "The Kid With a Bike" is an edge-of-your-seat emotional roller-coaster ride, set among ordinary people in a nondescript neighborhood. It's a story about a 30-ish, unmarried hairdresser and an angry, abandoned child, and from those ingredients the Dardennes create something that's part thriller, part love story, part fairy tale and altogether wonderful.

I'd like to claim that "The Kid With a Bike," which is arguably sunnier and more accessible than previous Dardenne films, will bring the Belgian duo a larger American audience. But I've made those predictions before and been wrong. The Dardennes are celebrated auteurs in the Francophone world, having twice won the Palme d'Or at Cannes (for "Rosetta" in 1999 and "L'Enfant" in 2005), but they represent a strain of low-budget, social-realist cinema that has little traction in the United States, even on the indie fringe. If you’ve never seen any of the Dardennes' movies, they're likely to sound medicinal and non-entertaining no matter how much I insist otherwise — but once you see one, you’ll get it. The brothers create lean, elegant, often haunting fables about unglamorous characters in moments of crisis, facing enormous moral questions or matters of life and death. They generally shoot in and around their home city of Liège, a French-speaking metropolis near the Dutch and German borders, often exploring its inept criminal underworld and probing the weak spots in Europe’s decaying social democracy. (I don't imagine the local tourist board is fond of them.)

Dardenne films have a distinctive rhythm; although they convey the feeling of real life, they are tightly edited and exciting dramas, where not a single second of screen time is wasted and every scene has a purpose. Their characters are constantly in motion, both physically and emotionally. In “The Kid With a Bike,” 11-year-old Cyril (played by the irresistible discovery Thomas Doret) is somewhere between a human turbine and a wild animal, with so much energy and desire in his pre-adolescent frame he can’t possibly contain it. Cinematographer Alain Marcoen’s camera flows alongside the characters, but never in a way that focuses your attention on technique. The Dardennes borrow plot twists and narrative beats from the world of thrillers, but invest them with a tragic potential we rarely see in actual thrillers. We’re constantly aware that the destiny of actual human beings -- in this case, the entire life of a boy who has not yet entirely lost his innocence -- rests on the outcome of an idiotic criminal scheme hatched by Belgian lowlifes.

When the story begins, Cyril has neither a dad nor a bike. He’s a nearly uncontrollable kid in a group home, ferociously dedicated to escaping and finding his dad, and completely immune to the mounting evidence that his father has bailed out and wants nothing to do with him. During one of his escape attempts, he tries to hide in a doctor’s office and winds up clinging to a woman named Samantha, played by the wonderful Cécile de France, a well-known French actress who is Belgian by birth. “Not so tight,” Samantha tells Cyril, as the youth counselors gradually pry him loose. “You can hold onto me, but not so tight.” That becomes the motto for their improbable relationship.

The Dardennes are great believers in the present tense, which can be difficult for viewers used to back story and psychological exposition. Cyril’s missing mother is never mentioned. (I suppose the possibilities are limited and obvious: She's dead, she's in prison, she ran away.) When Cyril and Samantha finally catch up with Cyril's dad, Guy (played by Dardenne regular Jérémie Renier, in another of his blond, feckless dude roles), he has almost nothing to say for himself. He's working in a restaurant across town, and has made no effort to contact Cyril. Yeah, he moved without leaving so much as a phone number. Yeah, he sold Cyril's beloved bike to some guy at a gas station, to raise a little cash. He doesn't bother apologizing: He was “in the shit,” financially speaking, and he tells Samantha that seeing Cyril just stresses him out. As deadbeat dads in movies go, Guy’s pretty much the prince of the tribe. He doesn’t even have an unbeatable heroin habit (like the guy Renier played in “Lorna’s Silence,” the Dardennes' last film) or gambling debts to gangsters or whatever. He’s just a total loser.

For that matter, what makes Samantha, a single and childless hairdresser with middle-class aspirations, take such a sudden parental interest in a thoroughly un-housebroken kid who nearly choked her on their first encounter? (Among many other efforts to make amends to Cyril for his crappy life, she tracks down his bike and buys it back again.) I guess the point of “The Kid With a Bike” is that questions like that matter a lot less than the question of what Samantha and Cyril are going to do now. And the movie’s second half sees Samantha locked in an increasingly dangerous competition for Cyril against a neighborhood gang leader named Wes (Egon Di Mateo), one of the Dardennes’ patented low-rent thugs. A charismatic, semi-tough teenager with a car, a PlayStation and a mini-fridge full of beer and soda, Wes moves right in on this fatherless kid’s obvious weak spot, seducing him into a criminal scheme that’s both cruel and stupid, a bad idea doomed to go wrong.

If the brief, sunny idyll of Cyril and Samantha's life together is interrupted by an act of terrible violence, this time around the Dardennes are more focused on the redemptive possibilities of their Dostoevskian universe than on its bleakest pits of despair. Cyril makes a bad mistake and must pay for it, and by falling for the wrong substitute parent he injures the only person who's ever offered him unconditional love. But he turns out to be the hero of a fairy tale after all, as well as the toughest kid you’d ever want to meet, and he's better than most adults at admitting his mistakes and adjusting to reality. If Cyril has what remains of his innocence stripped away from him during the denouement of "The Kid With a Bike," he still has the moral freedom symbolized by that bicycle -- and he still has a fairy godmother who hasn't quite given up on him.

"The Kid With a Bike" opens this week in New York and Los Angeles, with wider release to follow.