Whose freedom on contraception? 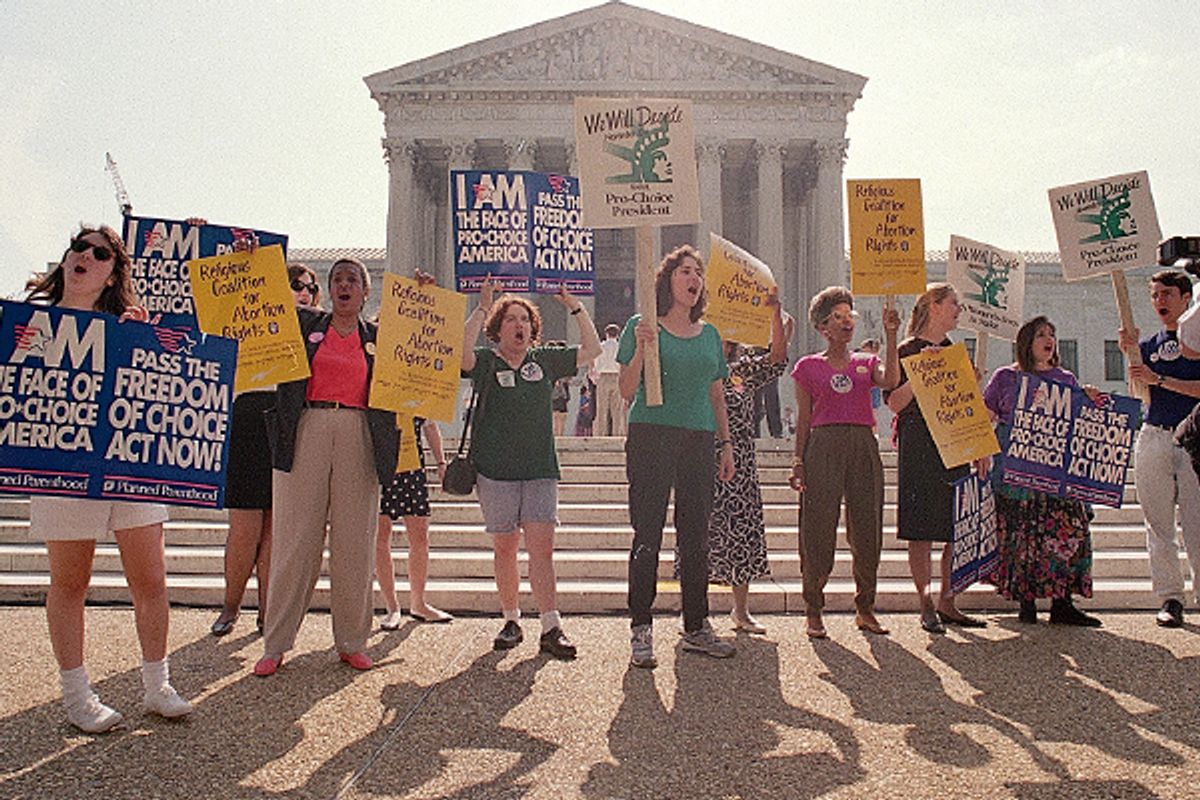 In the recent debate over insurance coverage of contraception, the phrase "turning back the clock" doesn't quite go far enough.

After all, the insurance guidelines the right has been fighting so fiercely represent the rare constructive movement on reproductive rights by the federal government, but they are not in themselves radical. At the same time as the Affordable Care Act (if it's allowed to go forward) will expand insurance coverage overall, these guidelines will ideally close the gaps in contraceptive access in a few ways that, while significant, won't upend the status quo much. They'll bring into line the lagging states that don't already require employer coverage of birth control -- less than half of them -- make it easier to access more effective forms, and eliminate the co-pay that can be prohibitively expensive and usually falls on women.

And yet, incredibly, this has still somehow become a debate about either the morality of women who use contraception or whether employers should be explicitly barred from firing their employees for using it. That would be the ACLU's concern about a new bill in Arizona. Back in 2002, that state passed a contraceptive coverage mandate with an opt-out only for explicitly religious employers that serve co-religionists -- in other words, a narrower definition than the post-accommodation federal one. Now, the Arizona legislature is seriously debating whether employers should be able to ask their employees their reasons for using birth control.

You don't have to go back to decades-old quotes from Richard Nixon or George H. W. Bush supporting federal funding of family planning (although those are illuminating) to realize how far the debate on contraception has shifted. You can merely go back to 2005. That was the last time the Equity in Prescription Insurance and Contraceptive Coverage Act (EPICC) was before the Senate. First introduced in 1997, it was co-sponsored in the Senate by Olympia Snowe and would have required health insurance plans to cover contraception on the thinking that doing otherwise would discriminate against women. Insurance coverage of the then-recently-approved Viagra provided yet another effective talking point about fairness -- "the perfect foil," as Gloria Feldt, then the president of Planned Parenthood, put it. Even the slogan that Planned Parenthood adopted around that time, "Cover my pills," was tonally distinct from now, when it would probably be taken as a Slut's Manifesto.

Fast forward to two weeks ago. Snowe, now about to retire, was the only member of her party to oppose the Blunt amendment, which would have allowed any employer to deny contraceptive or other insurance coverage on the basis of religious objection. This made her, comparatively speaking, a lone voice of sanity on an intended rollback of women's access to healthcare, but only because she had nothing to lose. Talk about moved goalposts.

In the '90s and early 2000s, the conversation was driven by discussions of fairness and equality, based on the statistic that women of reproductive age spent 68 percent more than men on out-of-pocket health care costs. Throughout the '90s, women denied contraceptive coverage by their employers (not necessarily for religious reasons) sued them, often successfully: Since 2001, several courts have found that employers not covering contraception were violating Title VIII of the Civil Rights Act, prohibiting sex discrimination.

"It’s a great fight," recalled Feldt, who fought the first round on contraception insurance coverage as president of Planned Parenthood from 1996 to 2005. "It shows how mean they are, how lacking in compassion, that what they’re really about has nothing to do with abortion or the health of anyone; it has to do with controlling women."

Back then, religious objections were discussed, but as former White House staffer and current president of the Center for American Progress Neera Tanden recalled in a New Republic piece this week about the 1990s roots of this debate, it "was far from the cries of 'religious coercion' that we see today." It's odd that Tanden says "the Catholic Church did not actively resist" a New York state law that only exempted houses of worship from contraceptive coverage, since Catholic Charities went to state court and lost three times. The real difference appears to have been that those objections were relatively marginal compared to today, with most of the Republican party currently racing to take the same position.

EPICC failed, but in 1998, Representative Nita Lowey, who had co-sponsored it in the House, successfully got a contraceptive mandate for federal employees' insurance plans into an appropriations bill. In today's whacked-out terms of debate, that would be 8 million people potentially being "paid to have sex." Instead, a Republican congresswoman, Nancy Johnson of Connecticut, scathingly said of U.S. Rep. Chris Smith's position that hormonal contraception should be considered abortion that "for us to make the decision that that woman must choose a means of contraception that reflects any one individual's determination as to when in that process of conception life actually begins is a level of intrusion into conscience, into independence, into freedom that frankly I have never witnessed." Guess which one of them is still in the House.

As recently as 2001, George W. Bush's attempt to eliminate that federal employee mandate was "resoundingly rejected" by Congress; there was only an ideological case to be made for the nation's largest employer not covering contraceptions, since the government "reported that it experienced no increase in costs at all" from the policy. Meanwhile, in the absence of broader federal action, some states got to work with their own contraceptive coverage mandates, starting with Maryland in 1998. As of now, according to Guttmacher, 28 states have some form of mandate to cover contraceptives, though 20 of them have some form of exemption. Only eight states in total have “expansive” refusal clauses that have a broader definition of religious organizations, "including at least some hospitals" who can refuse to cover contraception on their insurance plans.

Now, with this fresh round of birth control opposition in the states, including both legislative and legal action, even that can't be taken for granted. That's partly because the debate has been so realigned; as Corey Robin put it, "Rather than openly pursue their agenda of restricting the rights of women, the GOP claims to be defending the rights of religious dissenters. Instead of powerful employers—for that is what many of these Catholic hospitals and universities are—we have persecuted sects."

And as Sarah Posner has pointed out, recent polls on support for contraceptive coverage show conflicting levels of support, depending on the way the question is framed. On Monday, a New York Times/CBS poll had 51 percent of respondents saying that employers should be able to opt-out, and when a "religious affiliation" was added to the question, 57 percent said there should be an opt-out. But on Wednesday, a Bloomberg poll found that 57 percent of men and 68 percent of women said contraceptive coverage is about women's health, while 38 percent of men and 28 percent of women said it was a matter of religious liberty. On contraception, if not consistently on abortion rights, Democrats have rightly chosen to throw in their lot with facts and public health on the assumption that the female vote will follow, but the depth and, more recently, breadth of opposition should not be underestimated.

The mainstreaming of anti-woman extremism within the Republican party is a fact of life that, most recently, Mitt Romney has had to come to terms with. "It’s the result of the far ideological right using the democratic process, precinct by precinct," says Feldt. "We really can’t fault them for doing that, but [pro-choicers] need to use it more and better than they do." She adds, "We’re really good at reacting" -- as evidenced by the massive backlash to right-wing overreaching of the past few weeks -- "but we’re not so good at seeing the long term." In her view, that would mean reviving the long-stalled Freedom of Choice Act, the basic principle of which is that government cannot discriminate against a woman based on reproductive status, as part of a more proactive reshaping of the debate. As wonderful as all the satirical "every sperm is sacred" bills are -- the seeds of which, so to speak, were planted in the 90s Viagra comparison -- those conversations about "freedom" can go the other way too.

In her 2004 book "The War On Choice," Feldt credits one of her former staffers, then 28, with calling out the unfairness in insurers not covering contraceptives back in the mid-1990s. "For years, I had unthinkingly paid for my birth control out of my own pocket, just glad to have it," Feldt wrote. "But this was a new generation, asking new questions, demanding new progress. Why wasn't the birth control pill covered like any other prescription drug?" Less than a generation later, it's starting to feel like we're back at square one.