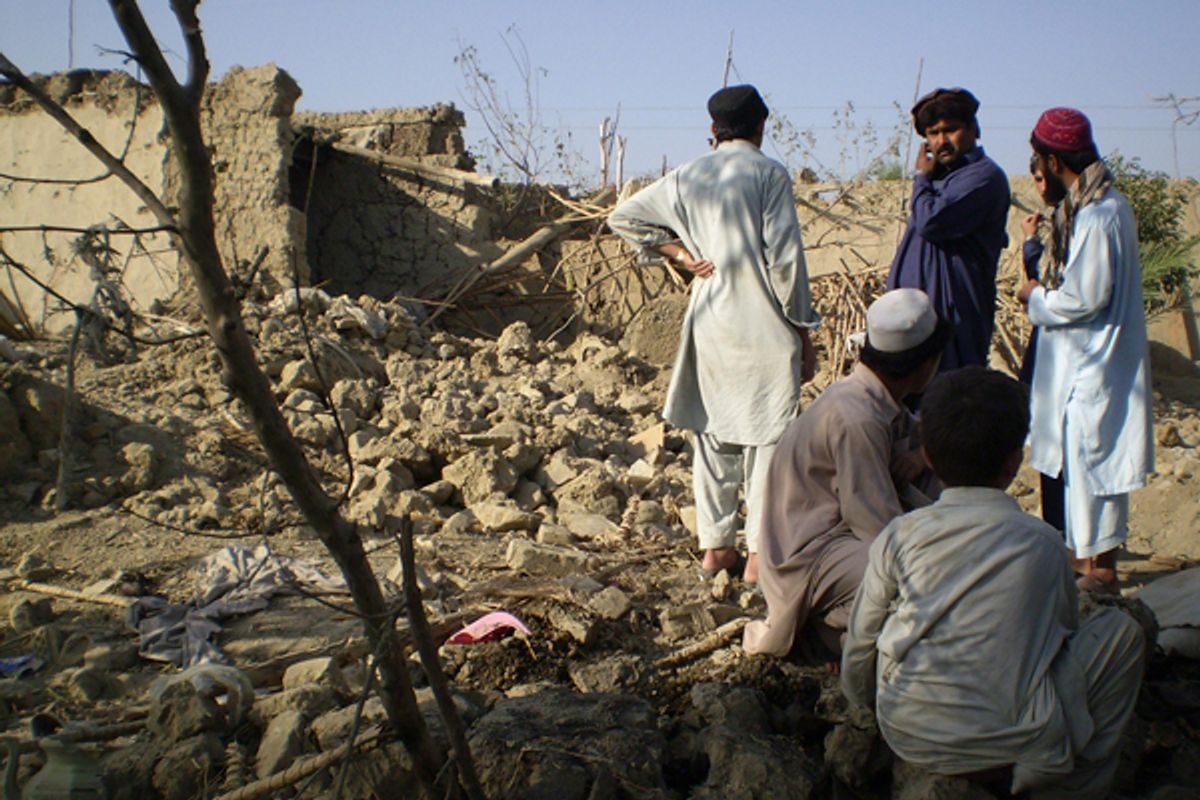 The site of a drone attack near Miranshah, Pakistan, in October 2008. (Reuters/Haji Mujtaba)
--

Both headlines rely on the same data, but reach entirely different conclusions. Implicit in the Associated Press headline is the idea that the Pakistani public is being misled about the nature of America’s covert drone war, which is otherwise acceptable. The AP reporter visited the site of 10 recent drone strikes in Pakistan, and concluded after interviews with locals that out of a total of 194 deaths, 56 had been "civilians." But even the second article, from the Bureau of Investigative Journalism, which emphasizes the reality of civilian casualties, does not quite capture the full story of what is going on.

Don’t worry, we are told by Attorney General Eric Holder, no American laws were violated in the process of killing U.S. citizen Anwar Al-Awlaki in Yemen. If America’s own citizens are not safe from drones, why do we expect Pakistanis to calmly sit and watch the missiles rain down on their kind?

The fact is, there is almost no oversight or accountability over the drone strikes in America, and certainly none in Pakistan, rendering the term “civilian” entirely useless in the discussion of any legal, ethical or strategic appropriateness of the targeted killing campaign.

The strikes chronicled in the AP report are merely the latest in a long campaign: at least 318 attacks since 2004, and 266 under President Obama. The United States publicly denied the drone campaign until January, when President Obama decided to use that most dignified of media venues -- a Google+ Hangout -- to tell his Pakistani allies in war that his country had, in fact, been bombing them for years. They should not worry, he said, because America was being careful about whom it killed.

The fact is, the American and Pakistani publics are entirely ignorant of a drone strike in Pakistan until after it occurs, and then we have little more than rumors. The hundreds of plausible drone attacks in Pakistan are documented by a handful of Pakistani papers or international press agencies in articles that, once stripped of their veneer explaining the political sophistication of the issue, are hardly longer than a Craigslist posting announcing the street corner where you can pick up a used bicycle.

The Bureau of Investigative Journalism, which has arguably the most detailed open-source database on drone attacks, lists some ranges of the toll: between 2,412  and 3,063 people reported killed. Of them, between 467 and 815 were civilians and 178 of them children. Between 1,158  and 1,263 people were injured.  Even the number of total strikes is actually unknown because we cannot definitively separate American and Pakistani conventional airstrikes from drone attacks.

An opaque network of security, intelligence and tribal officials, with the occasional terrified villager, provide us with some facts and many rumors about the aftermath of a drone strike.

Where, exactly, did the attack happen? What, exactly, is meant by terms like “militant compound”? Are the compounds being attacked ever near other compounds, or perhaps near homes? Are they near mosques, or schools?

How many people are killed? What names do those bodies, often charred beyond recognition, bear? Were they carrying their Taliban, Haqqani or al-Qaida bomb-proof identity cards?  Or maybe there is some tracking device on their bodies that allowed the Hellfire to home in on a signal? Or is there some local informant, no doubt entirely objective and well-versed in international law, who attested to the nature of those being targeted? Did those killed ever take part in armed action against NATO or ISAF forces? Did they ever cross over the border to Afghanistan?

No one in America or elsewhere can answer these questions, at least not publicly.  The congressional intelligence committee members tasked with overseeing the Title 50 “covert” program are woefully understaffed. Leaders admit they have too little information to oversee the program during their quarterly closed-door meetings.

To talk about civilian casualties in this context assumes that the people running the program are trying to avoid them. They are not. As the Wall Street Journal reported last November, there are two kinds of American drone targets: “signature” targets and “personality" targets.

Personality targets are faces with names, wanted men, maybe marked for death by some CIA analysts at a working lunch meeting in Virginia.  Signature targets are people who might be associated with bad people or who spend time with them. Maybe they hang out at the mosque far too often, or their beard is too long, or their eyes, when examined in a screen capture from a drone flying overhead, look too Uzbek for their own good. Maybe they are just wives or children. All that matters, in the words of American officialdom, is that they act “in a manner consistent with al-Qaida-linked militants.”

We know that American drones have followed up their kills by attacking rescuers and funerals. Locals are often afraid to offer aid to victims in the aftermath of a strike because the drones are still hovering overhead. Whether such attacks are personality or signature strikes, they are launched with full knowledge that civilians are likely to be killed along with the target.

We know that funerals are targeted, as in the June 2009 strike that struck a gathering of 5,000 people. A drone had earlier killed a low-ranking Taliban official, and it was hoped that the group’s leader, Baitullah Mehsud, would attend the funeral, but Mehsud escaped unharmed.  Instead, up to 83 people, including children and tribal elders, died in that failed baiting operation. In the end it took three tries and 130 deaths, including that of women and schoolchildren, to finally eliminate Mehsud. We know that American drones have targeted weddings and state-sanctioned anti-Taliban jirgas, like the one set up to solve a local dispute in Datta Khel in March 2011 where 53 people, including children and tribal elders, were killed.

In the same manner that the Bush administration’s use of the term “unlawful enemy combatant” muddied the waters enough to imprison hundreds of innocent men without trial, President Obama has legitimized a system of completely unchecked killing using the pretense of an “imminent threat.”  The underlying flaw in American strategy in the region continues to be the idea that there are a finite number of bad guys, and if they simply kill each of them, Americans will be secure once again. On the contrary, the drone attacks have wreaked havoc in Pakistan, and brought New York City the likes of Faisal Shahzad.

A country on fire

Now consider, for a moment, what the situation looks like to the 180 million ordinary people in Pakistan. Not privy to the secret meetings their military and civilian leaders have with American officials and journalists, they rely on the facts before them.

Ten years ago, Pakistan was not exactly a just and developed society, but since then it has been dragged through hell by inept generals and corrupt politicians who seem to keep picking the wrong side of an argument.  More than 40,000 of their countrymen, including at least 3,000 of their soldiers, have been killed in a war that has literally lit their cities on fire.  Nearly 3 million have fled the conflict, becoming refugees in their own country. With every bombing of a mosque, every gun battle, every video of their young men being beheaded like sheep, they ask themselves how things became so bad. No doubt, there are religious extremists in that region exploiting the situation, but Pakistanis know that is not the end of the story. Many attacks against Pakistanis are in direct retaliation for anti-Taliban military activity, including drone attacks.

Pakistanis, like their brethren in neighboring India, know what a foreign occupation looks like.  They are familiar with the British imperial project they were subjected to, and the Soviet occupation of Afghanistan they helped end. The West’s latest campaign may seem nuanced enough to be justified to us in America, but for many in Pakistan, it is the latest in a long history of foreign attempts to mold them into someone else’s image, and it is destined to fail.

Meanwhile, the American machine publicly repeats tired cliches of mutual cooperation with Pakistan, but brazenly kills its supposed ally’s soldiers at border posts, and its young men in Lahore’s bazaars. America ships a third of the supplies for its occupation in Afghanistan through Pakistan, in thousands of trucks driven by poor men who become the victims of routine bombings and kidnappings, over highways that have suffered some $1.3 billion worth of damage. U.S. forces use Pakistani air bases for refueling and rely on Pakistani intelligence for their operations, but Congress and the State Department refuse to pay hundreds of millions in bills. Pakistani officials estimate the “war on terror” has cost the country some $67.9 billion in economic setbacks and infrastructural damage. Despite austerity-linked IMF loans and the carrot of U.S. aid, economic problems in Pakistan persist, largely a result of instability since the Afghan war.

Yes, Pakistan’s military has a hand in the Taliban, perhaps even al-Qaida, and some senior members probably helped hide Osama bin Laden. Rumors of Pakistan’s top civilian officials permitting American drone attacks are probably true. But this is not news to Pakistanis. It does not change the fact that Pakistanis are being killed with impunity by the United States.

Recent polls show that 97 percent of Pakistanis disapprove of drones, and 73 percent view America unfavorably.  Other polls show that public opinion in FATA is resoundingly against the drone campaign, and in favor of Pakistani ground troops. In this context, it is astonishing to read a journalist claim that “Pakistanis are deeply torn about the drones." They are not. The tabulation of “civilian” deaths has little meaning for Pakistanis, and it shouldn't for anyone else either. The problem isn't that innocent people are being killed. The problem is the drone war itself.