Pick of the week: Will Ferrell's incredibly strange Mexican adventure 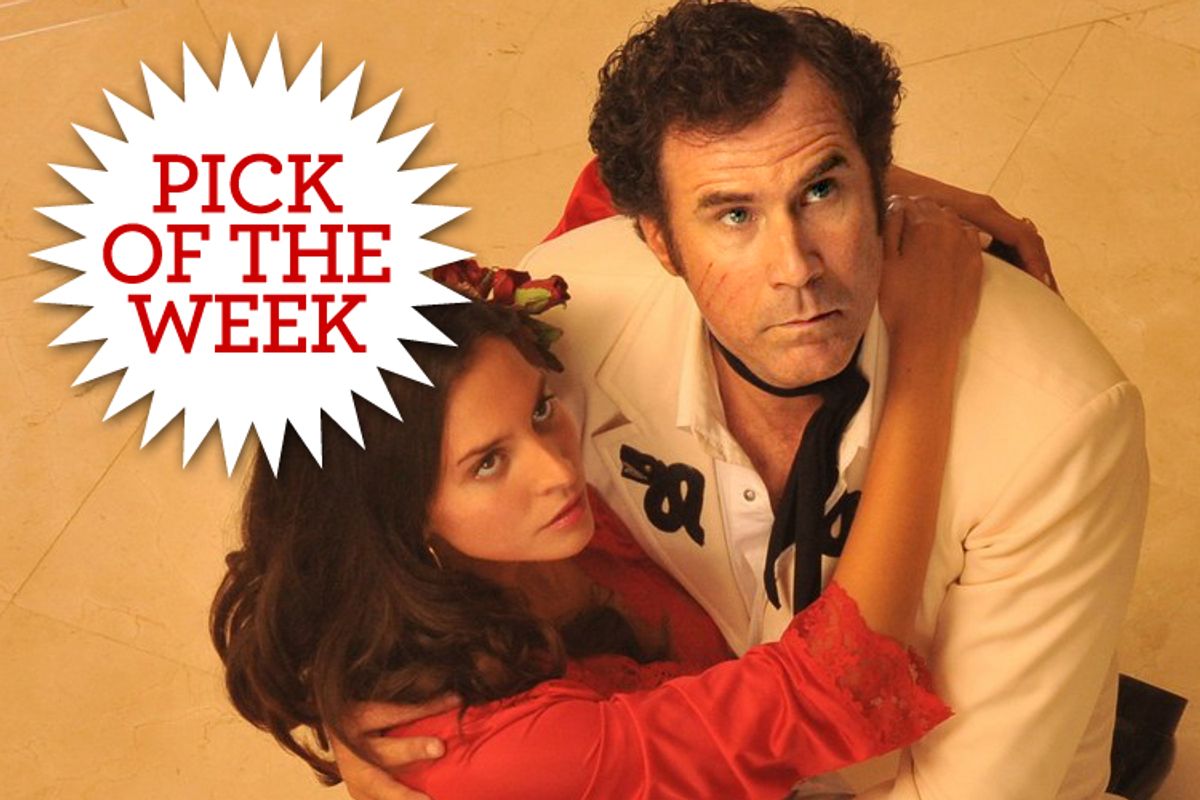 Genesis Rodriguez and Will Ferrell in "Casa de Mi Padre"
--

History will judge whether Will Ferrell's decision to make a movie entirely in Spanish -- and in loving imitation of a genre of Mexican film and TV that most English-speaking Americans have presumably never watched -- goes down as an act of far-sighted demographic brilliance or a bizarre and pointless practical joke. Well, OK, it probably won't. It's already clear that most reviews of "Casa de Mi Padre" -- which was written by Andrew Steele and directed by Matt Piedmont, both part of Ferrell's "Saturday Night Live"/Funny or Die posse -- will be tepid or worse. And mainstream audiences can completely be forgiven for wondering what the hell kind of movie this is and why it exists, and for feeling that they're somehow not in on the joke.

Even when I proclaim that much of "Casa de Mi Padre" is not funny on purpose, and that people who complain about that are missing the point -- well, I might be missing the point too, right? Will Ferrell became rich and famous as an entertainer who makes people laugh, and the audience that wants to watch him push outside that box, into some anxious zone of post-Situationist conceptual art, is probably a lot smaller. But Ferrell has been moving in that direction for a while. I'd argue that his best bits in "Anchorman" or "Talladega Nights" or "The Other Guys" or even way back in "Old School" come when he stretches beyond conventional comedy into strange and uncomfortable places. (He also played a straight dramatic role last year, in the universally ignored alcoholism drama "Everything Must Go.")

But let's get back to my original question: Is "Casa de Mi Padre" brilliant or pointless? Indubitably it's both, as Ron Burgundy might put it. It's a parody of something so specific that it never quite existed in the first place: the Mexican telenovela plus the spaghetti western plus the straight-to-VHS action flicks of the '70s, maybe. If you fell asleep in the hot-tub time machine and woke up stoned in 1982, this is the movie you'd find yourself watching on some UHF channel (right after the soccer match between Tigres and Toluca). Some of its gags absolutely fall flat -- having a climactic action scene replaced with still photos of miniatures is pretty funny, while an on-screen note apologizing for it is not -- but considered as a whole it's a wonderful and hilarious phenomenon, most of it is executed to Dadaist perfection.

"Casa de Mi Padre" gets funnier as it goes along, especially if you're paying enough attention to notice the constant continuity errors, editing glitches, mismatched musical cues and recycled backdrops. It's funniest of all if you speak at least a little Spanish, the better to appreciate Ferrell's perfectly stilted line readings -- if you want to look at it this way, he's playing a bad actor, playing a dumb but noble character, in another language -- or the delicious supporting performances of Gael García Bernal and Diego Luna as a pair of slime-oozing narcotraficantes. I have no idea how "Casa de Mi Padre" will play with Latino and Latin American audiences, but as Rene Rodriguez's largely sympathetic review in the Miami Herald suggests, they're likely to get a lot more of the gags. (Initial release of this film is limited to 600 or so theaters, many of them in heavily Latino areas of the West and Southwest.)

Ferrell, Piedmont and Steele have faithfully captured a certain strain of '70s and '80s Mexican pop entertainment, in which the rise of the drug lords (fueled in their turn by Yankee greed) is contrasted with a highly sentimental depiction of the rugged and noble Mexican spirit. That spirit is here embodied in Ferrell's stolid and none-too-bright Armando Alvarez, a rancher in the rural north who pines for the approval of his landowner papa (legendary Mexican film and TV actor Pedro Armendáriz Jr., in his final role) and yearns for a woman who will love the land and water and starlit skies as he does. Armando delivers this monologue straight into the camera, while inspirational music abruptly kicks into gear on the soundtrack and his father and his sleazy, sideburn-wearing brother Raul (Luna) shift uneasily on their feet. But Raul's ultra-hot Mexico City girlfriend, Sonia (Genesis Rodriguez, an actual Mexican soap star), is overcome with emotion. If no one else notices that she's the woman for Armando, she does.

How you respond to that scene might determine how you feel about "Casa de Mi Padre." It's hammy, shamelessly melodramatic and technically inept (all of that intentionally) -- but it's supposed to work on you anyway, if you'll let it. Similarly, a barroom confrontation between Armando, Raul and the supremely evil drug lord called La Onza (Bernal), begins as pure shtick and eventually becomes an evisceration of United States drug and immigration policy that would be completely impermissible in an American film. (I can't remember which one of them first refers to Americans as a race of "shit-eating monster babies," because I was laughing too hard.)

That moment of biting social criticism comes and goes, as does the dynamite norteño musical number "Yo No Se," performed by Ferrell with Adrian Martinez and Efren Ramirez (playing a pair of loyal-sidekick ranch hands). There's a completely unmotivated and splatterific shootout at a wedding, which tragically interrupts an awesome Spanish cover of "Whiter Shade of Pale," performed by Venezuelan pop star José Luis Rodríguez (aka "La Puma"). There's a vision quest led by an outrageously fake animatronic white leopard, and loaded up with the psychedelic, pseudo-Aztec claptrap that's such a central element in Mexican pop culture. Then there's the completely schizophrenic depiction of Americans, who are corrupt and mendacious morons in one scene, and John Wayne white knights in the next. (This movie was made by a bunch of gringos, but they've done their pinche homework.)

Inevitably, people are comparing "Casa de Mi Padre" to "Death Proof," the fake '70s exploitation flick that was Quentin Tarantino's half of "Grindhouse." (I would also suggest "Rubber," French director Quentin Dupieux's meta-meditation on the no-budget American horror film.) In both cases, asking what the point is becomes an unanswerable Zen koan: If you're posing the question, the movie already didn't work for you. I think the point of "Casa de Mi Padre" is that a major Hollywood comedy star made a preposterous and delightful low-budget movie in Spanish, for no reason except that the absurdity of the premise appealed to him, and because he wants to push his celebrity in unexpected directions. But maybe it's not even that complicated. Maybe it's just that when Bernal's unctuous drug lord makes a phone call from poolside, surrounded by girls in tiny bikinis, he uses exactly the right ultra-high-tech toy from 30-odd years ago, and it's beautiful and funny and expresses a lot of things without saying a word, and that's quite enough.