That's not the original Hulk!

Even in books dedicated to his work, famed comic artist Jack Kirby's drawings never appear on the cover 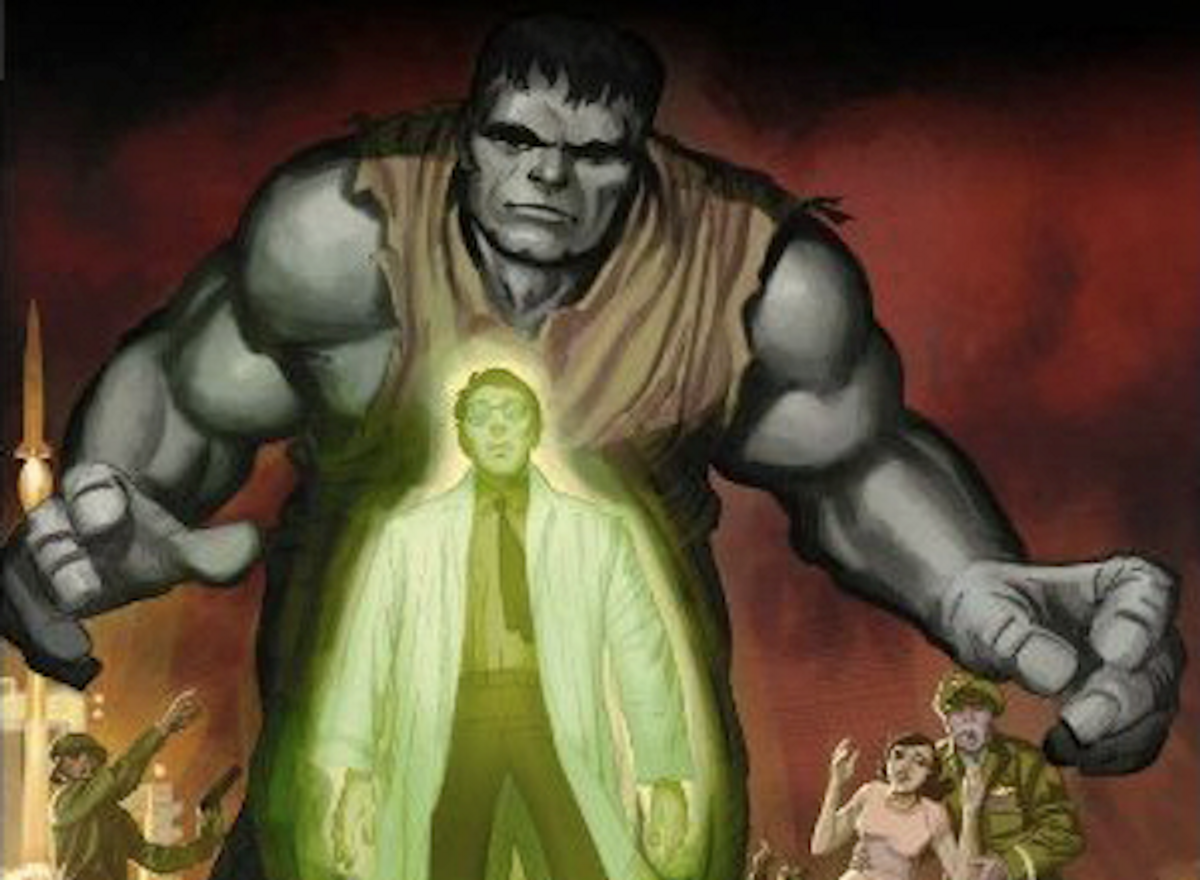 Jack Kirby is widely recognized as one of the most important comic creators of the 20th century. Co-creator of Captain America, the Fantastic Four, the Hulk, the X-Men, and creator of Darkseid, The Demon, OMAC and myriad others, he still can’t get no respect.

Early in 1992 my phone rang. At the time I was an art director at a book publisher in Manhattan, and it was some time before I learned the art of being taken to lunch. On the other end was a book agent. “Do you want to go to lunch?” “No thanks,” I replied. “Then I guess you don’t want to meet Jack Kirby?” Less then an hour later I walked into the lobby of the hotel where the Kirbys were staying. I was the first to arrive, and walked over and introduced myself to Jack and Roz. The raison d'être for the meeting was that Jack and Ray Wyman were shopping around "The Art of Jack Kirby." I will save the details of that meeting for another time, but suffice it to say Jack regaled me with war stories over lunch, and I met one of the greatest influences on my early life. Unfortunately I could not convince my publisher how important I believed the book to be. Sadly, almost exactly two years later I learned Jack had passed.

[caption id="attachment_275851" align="aligncenter" width="460" caption="The Art of Jack Kirby, by Ray Wyman, (The Blue Rose Press, 1992). The cover is signed “Kirby/Eastman” but there’s little evidence of Kirby. Kevin Eastman is the co-creator of the Teenage Mutant Ninja Turtles and also wrote the foreword."]

A short time afterward I took a trip with my family to San Francisco and we visited the Cartoon Art Museum there. Truth be told, I only had a cursory interest in comics at that time. Although a friend tried to keep me abreast of current “good” comics ("Dark Knight Returns" and "Watchmen"), my interest had waned after Kirby left DC in the mid-1970s and I had lost track of him and the comic book industry in general. Much to my surprise "The Art of Jack Kirby" sat on a shelf for sale. But something was wrong. The cover didn’t look like Kirby, and although it was signed “Jack Kirby / Kevin Eastman” I could discern very little Kirby at all. In a decision I’ve regretted every since I passed up the chance to buy a copy based on the cover, and have yet to find an affordable copy.

Cut to present day and it was with great expectations to see that a university press would be publishing Charles Hatfield’s "Hand of Fire: The Comics Art of Jack Kirby." Hatfield, after all, is a college professor of English at California State University, Northridge, and the author of "Alternative Comics: An Emerging Literature," as well as many articles over the years for "The Jack Kirby Collector." However, when I finally saw the cover I had that same sinking feeling I had years earlier: “That doesn’t look like Kirby.” Sure enough, as Hatfield explained on his blog: “Re: the cover, I love Geoff Grogan’s image, and I’m proud to have it! I commissioned it. The Press and I discussed many options for the cover. There were legal constraints, of course. The decision to go with a new, original illustration rather than a photo of Kirby was my call. I’m digging the results!”

As I designer I know there were infinite possibilities, regardless of the rights issue, beyond a choice of a photo or Kirby art. With all due respect to Geoff Grogan I am hard-pressed to understand why someone would opt for an imitation of the artist the book is about. Can you imagine a book on Matisse, Picasso or Pollock, or pretty much any “fine” artist, with faux art on the cover? For me it represents that a serious take on comic artists and Kirby in particular still has a long way to go.

Published almost simultaneously this year was "Lee and Kirby: The Wonder Years," an oversize trade paperback edition of "The Jack Kirby Collector," written by the late Mark Alexander, with a cover (and interior) designed by publisher John Morrow. Unfortunately, once again, for a book about Lee and Kirby’s "Fantastic Four" years, Kirby is nowhere to be seen on the cover.

Actually both these tomes represent a long-standing tradition of packaging books about and containing art by Kirby with someone else’s art on the covers. Kirby drew hundreds or more covers in his lifetime, yet apparently isn’t qualified to grace his own books.

An early example of this is the "Silver Surfer Novel," published by Marvel/Fireside Books in 1978. Hailed as the first new (and final) collaboration in many years between Stan Lee and Jack Kirby, “All New…The Ultimate Cosmic Experience!” Lee and Kirby shared equal billing on the cover over a painting by Earl Norem.  Perhaps the conventional wisdom was that “painted covers look like paperback covers,” yet when Marvel signed a deal with Lancer books in the mid 1960s to reprint their comics for the first time in mass-market paperback format, it was recycled (and pastiched) Kirby art that they utilized.

Marvel continued this practice going forward. The cover of "Fantastic Four" Number One, November 1961, is one of Kirby’s most iconic covers. For Marvel’s "Fantastic Four Omnibus" Volume One (2005), which contains only Kirby’s art within, they featured an Alex Ross painting based on the cover, although they did issue a variant cover as well as one with Kirby’s original cover. Covering the same material with Kirby’s name once again featured prominently, the "Fantastic Four Masterworks" Volumes One through Six, issued in 2009, displayed covers by Dean White. For the "Fantastic Four Omnibus" Volume Two they issued an alternate with a painting by Mexican artist Ladronn. "The Hulk Omnibus" and "Masterworks" volumes sport competing “interpretations” by Ross and White, respectively. "The Avengers Masterworks" Volumes One and Two again featured cover art by White while prominently flaunting the Kirby moniker; likewise "Captain America Masterworks," "The Avengers Omnibus," and "Thor Omnibus" series. According to Marvel, "Thor" contains: “The painstakingly restored classic tales that gave birth to the greatest saga of myth and adventure to ever grace the comic book page!” Similarly, despite touting Kirby, the "Tales From Asgard Omnibus" selling copy boasts “Read these stories as never before with all-new, modern coloring and six extraordinary interlocking covers by current THOR artist Olivier Coipel.” For the record, Marvel, unlike DC and many other publishers in these days of high-res scans, has continued the practice of hiring artists to trace and recolor the original pages, so one can make the argument that you aren’t getting Kirby art in the interiors as well.

[caption id="attachment_275941" align="aligncenter" width="400" caption="... and Dean White reinventions. The White covers are signed Kirby/White although the art is only based on Kirby’s."]

In 2008 Abrams published the Eisner Award winning "Kirby: King of Comics" by Kirby biographer and former assistant Mark Evanier. While not his long awaited biography, this coffee table book featured beautifully reproduced artwork plus a succinct biography. The cover, by designer Paul Sahre, solved the rights issue, as well as which Kirby art does one display from what comic book company, by creating a dynamic wraparound collage featuring tightly cropped images of various elements and characters: a gray Hulk, a hint of Captain America’s shield, a rocketship, etc. Unfortunately, Sahre left mid-project due to creative differences, so the interior does not display the same level of creativity he was able to put on view earlier with "Maximum Fantastic Four," with its inventive folded poster cover and panel-by-panel enlargements, a tribute to "FF" #1, ironically published by Marvel in 2005. The Abrams cover was a toned-down version of Sahre’s original design and oddly, they chose to devote a gatefold to an Alex Ross “interpretation” of a Kirby splash, quite a bit of real estate to give away for a work of art not by the subject at hand.

One can only hope that when Evanier finally gets around to publishing his biographic opus on Kirby that the cover will feature art by the subject, or a design that pays tribute without resorting to simulation or trying blatantly to appeal to a contemporary audience. Sometimes imitation is not the highest form of flattery.