What's the right sentence for hate? 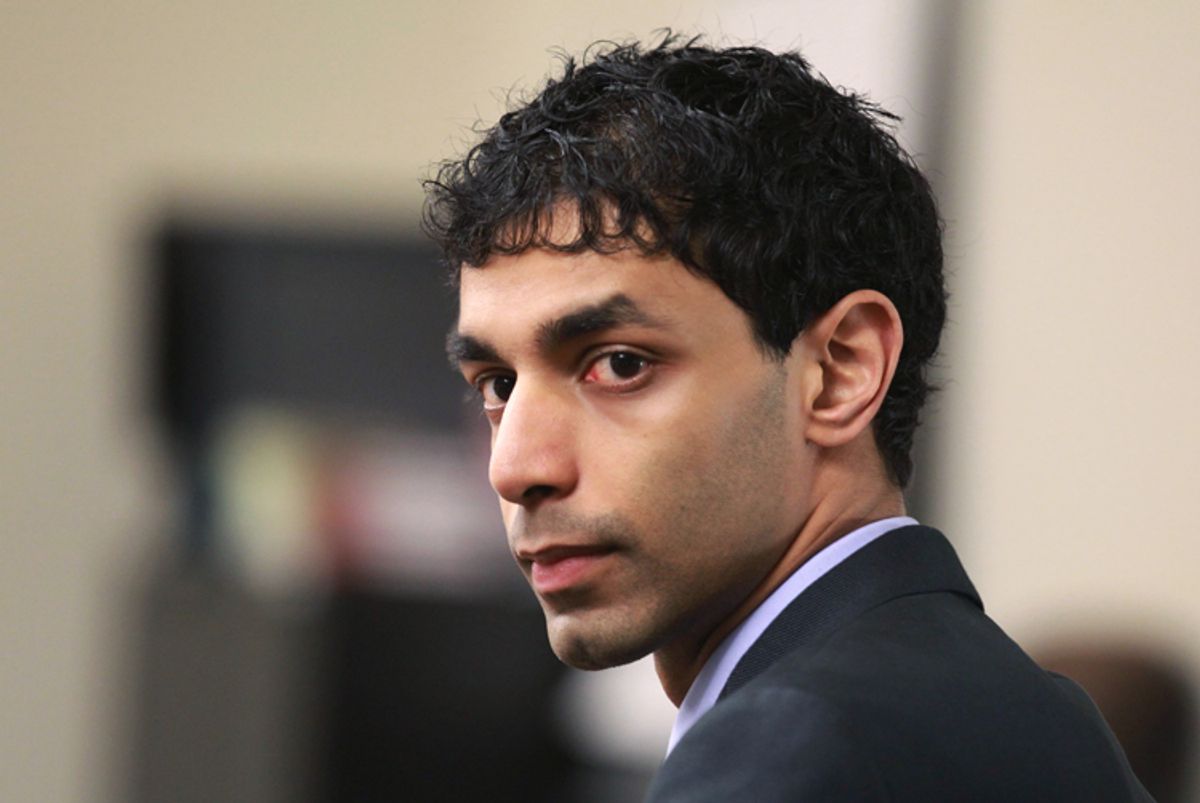 Dharun Ravi didn't kill Tyler Clementi. But a year and a half after the Rutgers freshman threw himself off the George Washington Bridge -- and after three intense days of jury deliberations -- Ravi has been found guilty of several charges stemming from the events before and after his ex-roommate's suicide. The guilty verdicts include invasion of privacy, intimidation, tampering with evidence, tampering with a witness and hindering apprehension. Ravi, who has not yet been sentenced, faces up to 10 years in prison and possible deportation back home to India.

The school year had just barely started back in September 2010 when Ravi tweeted, "Roommate asked for the room till midnight. I went into molly’s room and turned on my webcam. I saw him making out with a dude. Yay." A few days later he tweeted similarly, "Anyone with iChat, I dare you to video chat me between the hours of 9:30 and 12. Yes, it’s happening again." The next day, Clementi sent a message of his own. He wrote "Jumping off the gw bridge sorry" on Facebook before taking his life.

The death of Clementi, along with a harrowing string of other suicides by gay and lesbian youth, stunned the world and helped inspire the radically beautiful It Gets Better Project. But it's left us still grappling with how to deal with bullying and intimidation, and what the appropriate punishments should be for legally vague offenses – often committed by very young offenders.

Ravi, now 20, had pleaded innocent to the string of charges against him and refused a deal. Yet Ravi admitted to investigators that he and his friend Molly Wei had deliberately spied on Clementi, who had told his parents he was gay only days before starting at Rutgers. (For her cooperation in the investigation, Wei was not charged for her participation in the spying.) And on the night of Clementi's death, in an apparently gross misunderstanding of good intentions, Ravi texted him that "I'm sorry if you heard something distorted and disturbing but I assure you all my actions were good natured."

But he then followed up with a sincere sounding apology, saying, "I've known you were gay and I have no problem with it…. I don’t want your freshman year to be ruined because of a petty misunderstanding, it’s adding to my guilt." Later, Ravi would say that he didn't know yet that Clementi had already posted his suicide note on Facebook, and was heading to his death.

Ravi is currently free on bail, awaiting his sentencing on May 21. Juror Bruno Ferreira told Reuters Friday that it was "Thinking about it not being done once, being done twice, not just on one day," that swayed the jury on the more difficult to prove hate crime charges.

Ravi likely could not have imagined that his callow, cruel disregard for his roommate's privacy would lead to his death. He couldn't have predicted that his vile disrespect for another man would land him in a courtroom. But though he wasn't standing by Tyler Clementi's side that night on the George Washington Bridge, it seems he was very much there in Clementi's mind. And now a jury in New Jersey has convicted him of hate crimes. A judge faces the difficult task of deciding to what extent he should pay. And a father who lost his son has a few words of advice to all of us left behind. "You're going to meet a lot of people in your life," Joe Clementi said at a press conference last week. "Some of these people you may not like. Just because you don't like them doesn't mean you have to work against them."

Bullying It Gets Better Lgbt