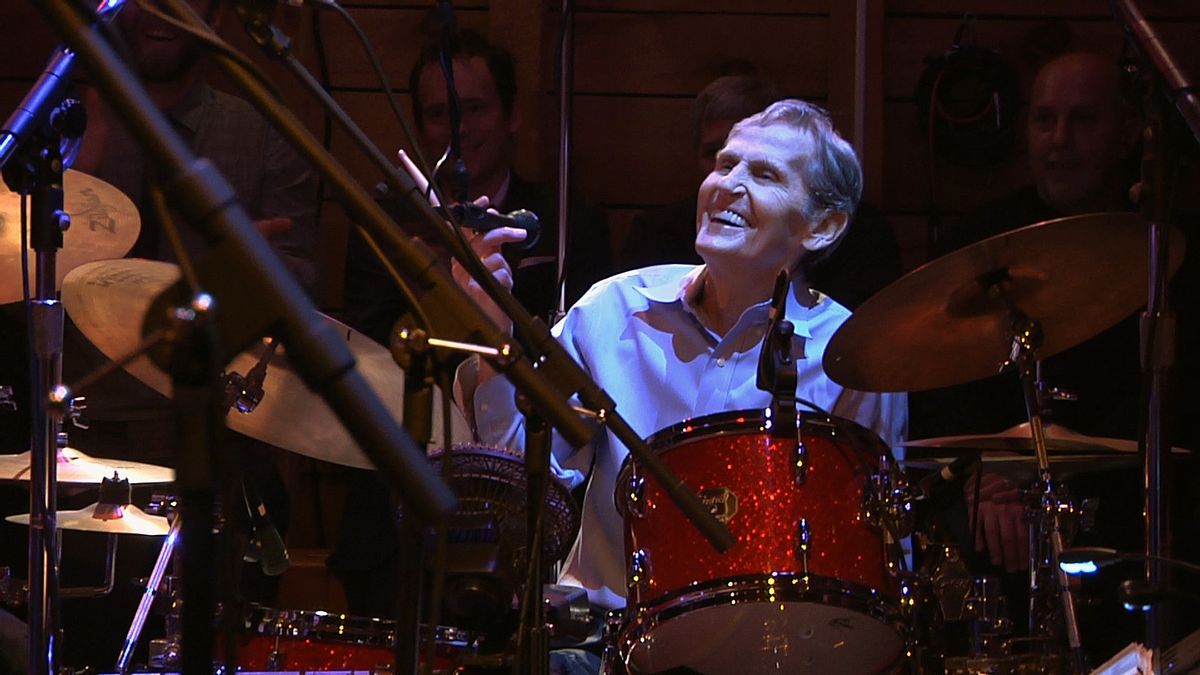 Rock legend Levon Helm -- the drummer and a lead singer for the Band -- is batting 1.000 at the Grammys. Last month, when his "Ramble at the Ryman" won best Americana album, he made it three in a row -- three nominations, three wins -- following Grammy Awards for his two previous albums, "Dirt Farmer" (2007) and "Electric Dirt" (2009). Not bad for a 71-year-old survivor of throat cancer, who had once lost his voice completely.

These days, a happy-to-be-alive Levon Helm presides over what he calls "midnight rambles" -- concerts in his Woodstock, N.Y., barn, where he's surrounded by musical friends and family, including his daughter, singer Amy Helm. His voice may be raspy, but his energetic drumming and high-beam smile can warm the coldest winter night. Following rousing versions of "The Weight" and "Ophelia," Helm invites Marco Werman into his house for after-midnight conversation.

Like Johnny Cash or Willie Nelson, there is something fundamentally authentic about Levon Helm. His music always felt real and if you ever read his autobiography, "This Wheel’s on Fire," you know he doesn’t flinch from describing his long, rambunctious ride.

To anyone who grew up with Levon Helm and the Band, it's a shock to see him these days, a reminder of our own mortality. He’s gaunt, almost spectral, and his voice is sometimes a whispery rasp. As Levon explains, these midnight rambles -- which have become a tremendous success featuring a who’s who of guest stars – began as “rent parties” organized by his manager Barbara O’Brien to pay the mortgage on his farm and cover his medical bills. Weed and whiskey were replaced by cancer treatments.

But Levon Helm is a survivor. A man who beat the odds. He's a true gentleman. And he can still drum like a demon for two hours straight.

What's important to Levon now is keeping his American roots music alive, and passing it on. Lots of new groups seem to be tuning in – from the Decemberists to Mumford & Sons and the Carolina Chocolate Drops.

We're tempted to describe Levon as a lion in winter, but as you’ll see in this interview with Marco Werman, he’s more like a Cheshire cat with that incredible smile and a wry perspective on his life. Don't miss his rendition of a Turkish Army Band toward the end of this conversation.

Our Quick Hits team was directed by John MacGibbon with Andy Bowley as director of photography.

It's one of the most famous opening lines to any rock song of the past 50 years, and it was sung originally by drummer Levon Helm in a clear, strong tenor voice with an unmistakable Arkansas twang. Since it’s release in 1968, "The Weight" has become an essential part of the American songbook.

This version -- filmed for Quick Hits at a Feb. 4, 2012, midnight ramble concert in Levon's Woodstock, N.Y., barn is "The Weight" at its most communal. A song in which everyone shares the burden and the joy.

Written by Robbie Robertson, "The Weight" is a masterpiece of biblical allusions, enigmatic lines and iconic characters. But the heart of the song has always been Levon Helm, who emerged from the Southern cotton fields to play with Bob Dylan and become the only American in a group that reintroduced America to its musical roots.

"Back porch music" is how Levon Helm describes what he and his band perform in their midnight rambles. It's the music of the traveling tent shows he used to hear as a kid in Arkansas. Communal music, everybody joining in. A little country. Some rockabilly. A touch of gospel. A tinge of blues. Add the guitars, drums and horns that power rock 'n' roll, and it's the Levon Helm Band in action.

"Ophelia" is the perfect kind of song for this: old timey and fired up -- with plenty of humor and some clever lyrics:

Ashes of laughter
The ghost is clear
Why do the best things always disappear?
Like Ophelia
Please darken my door.

That's Jim Weider on guitar, followed by Larry Campbell, the leader of the band. Clark Gayton does the trombone honors, and we get to hear Amy Helm (who has her own band, Ollabelle). Levon brings us home with his distinctive drumming, ending in a flourish and a smile of pure satisfaction.