When home-grown was apolitical

An 80-year-old Wisconsinite's recipe for parsnips recalls a time when healthy, home-cooked food wasn't a statement 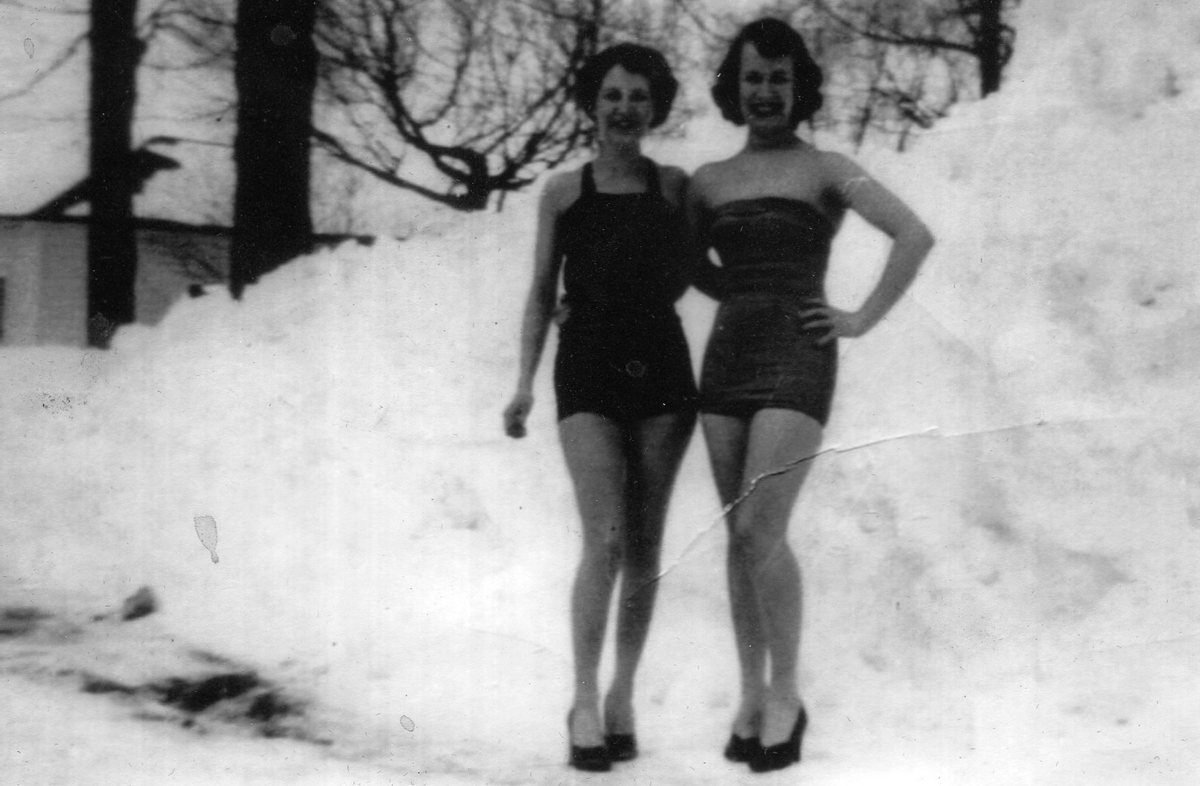 Carol with her sister Joanne (Courtesy of Carol)
--

In an argyle sweater, girlish gray corduroys and a pink hat embroidered with the phrase “Obey me!”, Carol looks as light as a husk. Despite her 80 years, her brown hair is just frosted with gray and her eyes are sparrow bright. She lives in Phoenix, Ariz., where she is faithful to her church (Catholic) and her party (Republican). Although she was once infamous for her sharp tongue and the rigidity of her beliefs, the past 10 years have mellowed her; her husband’s sudden death and her own health problems have changed her perception of what really matters. She doesn’t blink an eye at choices that once would have alarmed her: a grandson’s shaggy hair, another grandson’s Japanese wife, a gay nephew’s marriage. One thing that hasn’t changed in all these years is her attitude toward food, which remains staunchly old school.

Although she’s recovering from a serious fall, she still bakes. I sample a slice of moist, honey-tinged rye, and she plies me with sugar-crusted oatmeal cookies. As we talk, she peels parsnips at the kitchen sink. She says she doesn’t understand the modern obsession with doing everything fast. She thinks something is lost in the translation.

“When I was growing up,” she says, “there wasn’t much prepackaged stuff in the grocery store. Quick stuff -- I don’t see any advantage to it. It’s a whole lot cheaper doing it from scratch. Four potatoes don’t cost you as much as those dehydrated ones. And I think it’s almost the same amount of time to make things from the box.” She finishes slicing the parsnips into oblong pieces, and cracks an egg into a bowl. “Fried parsnips -- this was my mother’s recipe,” she says.

When Carol was growing up, farm to table was the norm. As a small child, she lived on a small farm outside Centuria, Wis. “Even during hard times we did all right. We grew our own vegetables, raised our own beef. My uncles cured bacon and ham. We made maple syrup. If someone in the family wasn’t doing so well, the rest of the family made sure they didn’t go hungry. I mean, it wasn’t free, but we worked things out.” As an adult, Carol kept a big garden. “I loved it. I grew onions, beets, radishes, carrots, tomatoes, green beans. I’d grow parsnips over the winter, and we’d dig them up in the early spring.” The aforementioned shaggy-haired grandson wanders into the kitchen and remembers summer visits to Carol’s house in Wisconsin: “There were always garden-fresh vegetables. My grandpa loved green onions and fresh sliced tomatoes with salt on them. So there would always be a plate of that. Grandpa would stop by a local farm for sweet corn. And she made the best roast — to this day, that’s my favorite food.”

Like everyone I’ve interviewed for this series, Carol’s life can be read two ways. Her father was the town postmaster, and she had three sisters. In 1953, she married a childhood friend, Merald, the son of the town banker. They raised four children. Merald worked his way from clerk to president of the Polk County Bank, an old-fashioned rural institution. Carol was a homemaker who baked cookies every Wednesday and kept her house as neat as a pin. The story is as neat and squared away as Carol’s housekeeping. On the other hand, unconventional memories bob into Carol’s narrative: “Joanne and I decided we needed a car, so we bought a car together.” Carol rolls the parsnip sticks in egg and dunks them in a bowl of cracker crumbs. She pours oil into a cast-iron pan. “But you know, girls just didn’t own cars in those days,” she says, lighting the stove. “So again, everyone probably thought ‘Well, those brazen hussies. Those two Hoyt girls.” She laughs.

Joanne and Carol would drive to the local dance hall or, for a lark, go bird hunting. When Carol was 20, the sisters and a friend drove the ’36 Ford all the way to Mexico. Border towns weren’t enough of an adventure for three girls from rural Wisconsin; they hit the gas and traveled around the country, making it as far south as Mexico City. “Joanne and I were the devils,” Carol says, laughing. “We were the two sisters who were always making trouble.”

While Carol fries the crumbed parsnips golden brown, I slide a pan of pork chops from the oven and put the finishing touches on a salad. We sit down at the kitchen table, and Carol says grace.  The parsnips are delicious — the root’s complex sweetness is grounded by the savory fried crust. “When you were eating fried parsnips with your family, what else would have been on the table?” I ask. “Pork chops, rolls, potatoes,” she says, pointing at each item on our table. She laughs a little — I had put together the rest of the dinner without consulting her, but hit upon her childhood combination anyway. “And a salad,” she finishes. “My mother always had a salad.”

Today’s effete foodie would salivate at the food that graced Carol’s childhood table: pork chops from local pigs, garden-fresh parsnips and salad greens, homemade bread and fresh butter. Her life story reminds me of an important fact: We haven’t been this way for long. Living people, indeed relatively spry living people, remember a time when the industrial food chain was not a matter of course. A time when you knew where your food came from, a time when the command to “eat local” would have seemed laughable, a time when farm to table was not a political statement but common sense.

I doubt Carol has heard of Michael Pollan, and she would be unlikely to agree with his points in the manner that he presents them. But her life reflects an attitude about food that is not so out of pace with his supposedly liberal values: She takes delight in vegetables; she sees the value of gardening; she’s not above enjoying a glass of wine with dinner; she eschews boxed food in favor of baking and cooking from scratch. When I ask her if her family ate meals together every evening, she says, “Oh yes. Of course we did.”

As a young woman in the late '40s and early '50s, Carol was out of step with the cultural norm in the sense that she was something of a daredevil, too independent. Today she’s out of step with mainstream America in that she believes that time spent in the garden and kitchen is not time wasted, that the essence of quality is attained through toil, not technology. When it comes to food, her habits give me hope. She reminds me that our current culture of convenience is such a new thing. Could it be that we can still correct our misstep? My question is not: How did we get to the point where a home-cooked, home-grown meal is a political statement? But rather: How do we get back to a point when it isn’t?

Note: Carol points out that the parsnips can be parboiled over the weekend to save time when cooking weeknight suppers.