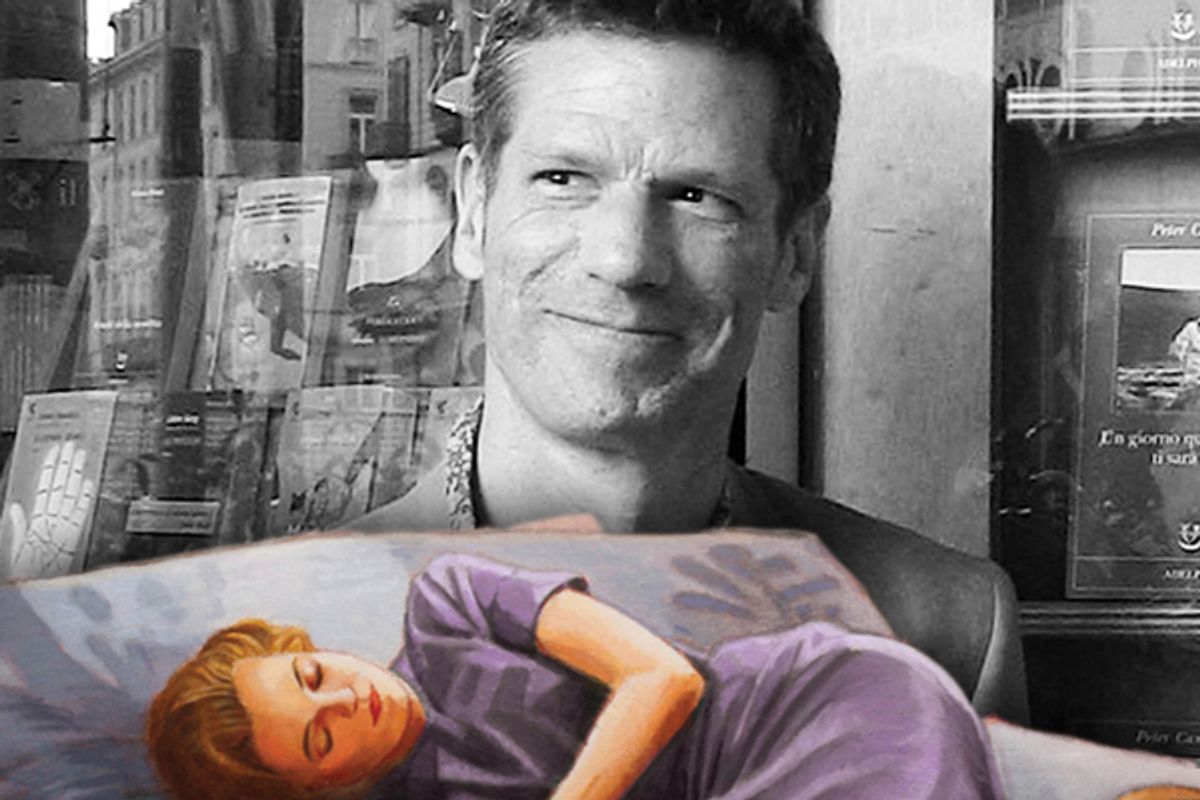 Peter Cameron and a detail from the cover of "Coral Glynn"
--

A big, dark house in the English countryside, with its brooding, damaged master; the pretty but gawky young woman who comes to work there -- and to stumble over secrets in gloomy hallways: These are the elements of an old-fashioned gothic tale, and also of Peter Cameron's lovely, enigmatic new novel, "Coral Glynn."

Cameron, who is best known for his YA hit, "Someday This Pain Will Be Useful to You," has written a string of slender, pristinely crafted adult books that have acquired a passionate cadre of admirers. Despite their variety, each of these books has a still, slightly eerie quality, like the branch, adorned with stuffed hummingbirds and covered by a glass dome, that Coral contemplates in the sitting room at Hart House. Cameron's fiction is not as frankly surreal as the work of Haruki Murakami, but it has the same perfume of dreamland about it, full of mysterious figures and images, and the sensation of time slowed down and sidetracked into some back alleyway of eternity.

"Coral Glynn," however, begins at a very particular time. It's 1950, a few years into the aftermath of the war, and Coral works as a private nurse. She comes to Hart House to care for old Mrs. Hart, who's dying, and she catches the eye of her son, Major Hart, who walks with a cane thanks to a war injury. Coral lost her brother in a battle at El Alamein. Her parents, too, are dead. "I have no home," she tells the major.

Hart House is marooned among soggy fields ("It's always late here," the major says of springtime, but the adjective applies generally), the housekeeper almost never leaves the place and the major is convinced that if he doesn't seize the last tiny scrap of life likely to be blown his way, he'll become a "hermit." He's afraid he'll "go all bitter and dead inside like my mother ... I can feel it already, something inside me, someone inside me, moving from room to room, shutting all the doors, shuttering the windows." When his mother dies not long after Coral arrives, he proposes marriage.

What should Coral do? She's poor and friendless and will be lucky to find a similarly dispiriting position at a time when a surplus of experienced war nurses has flooded the job market. These deathbed posts are starting to wear on her; it is "impossible for Coral to imagine sitting in a room and not feeling imposed upon it." Major Hart seems kind, and he has a fine house and plenty of money. Isn't marrying the master of the house the dream of every mousey hireling?

As if in counterpoint to such rumination, Coral blunders into a bizarre and disturbing scene while attempting to take a restorative walk in the woods. At the heart of prickly grove of holly trees, she finds two children, a boy and girl, playing a sadistic game. She can't persuade them to stop, and when she returns to Hart House, she decides to say nothing about it, a choice she will have cause to regret.

There's a way stories like this are supposed to go, and "Coral Glynn" both does and doesn't play by the old rules. Unlike Jane Eyre, who is in some respects her fictional ancestor, Coral does not know what she wants -- or is entitled to expect -- from life. Although her thoughts and feelings are rarely kept from the reader, they are in some respects unknown to their owner, so she is both visible and hidden, a puzzle trying to solve itself.

In another departure, one big "secret" of Hart House, though concealed from Coral, is shown to the reader from the start: Major Hart was once in love with his best friend, Robin. He thinks of this as "a thwarted, impossible love, like those blossoms that rot upon the stem and produce stunted fruit, eaten from the inside out by maggots." Robin, who has married an understanding, motherly sort of woman, does not agree. At issue for the prospective groom as well as for the bride is a question Coral poses at the novel's turning point: "A proper life? What is a proper life?"

"Coral Glynn" is a tribute to a certain breed of novel most often written by British women in the mid-20th century: astringently unsentimental, disciplined, replete with half-acknowledged emotions moving like the shadows of alarmingly large fish deep beneath the surface of the sea. Because their own time preferred to valorize a more chest-thumping sort of writer, their brilliance has been almost forgotten. Some, like Muriel Spark, never entirely slipped from view. Others, like Elizabeth Taylor, are just now being revived. There's a dash of Daphne du Maurier here, too, and a touch of the sublime Barbara Pym (though not, alas, her humor). Like Cameron's novels, these books have won a following that makes up in tenacity for what it lacks in size. The audience for both keeps on growing, one devoted reader at a time.