Broadway veteran Megan Hilty is stealing the NBC show as villain Ivy Lynn. It wasn't supposed to be this way 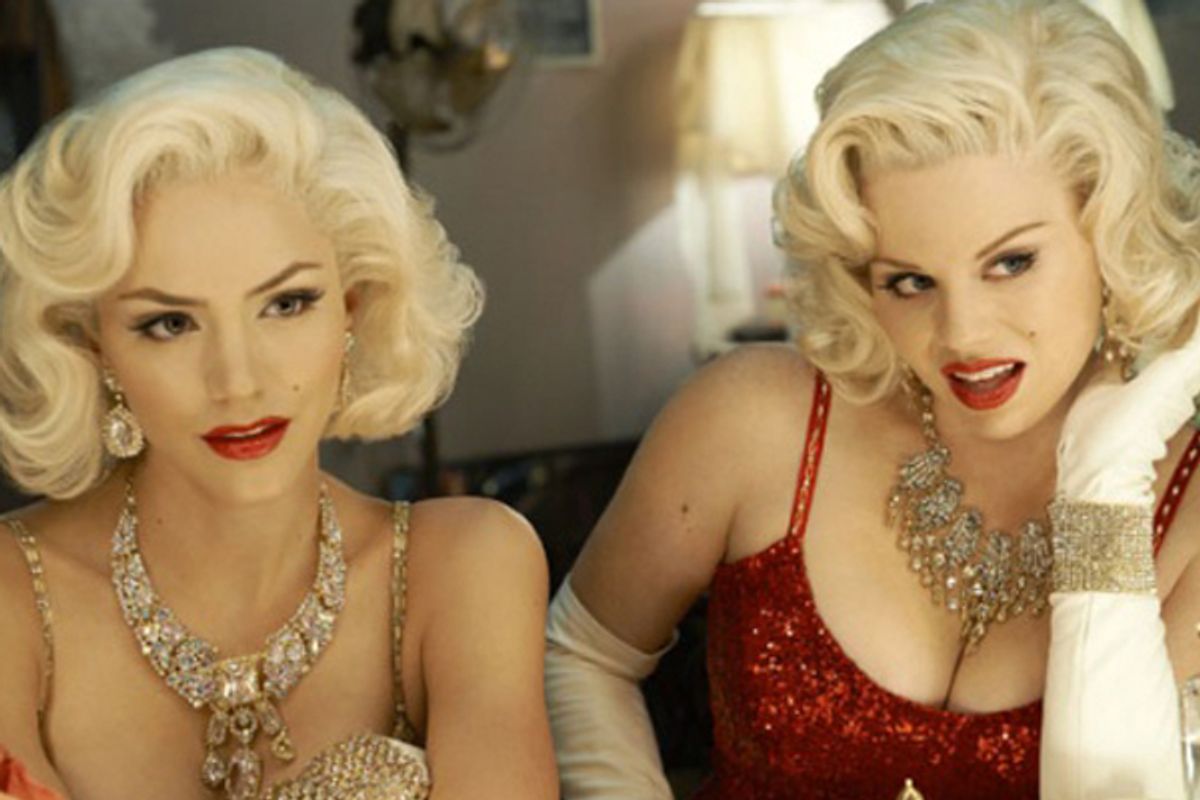 On NBC’s behind the scenes Broadway drama "Smash," two actresses are vying for the lead role — and not just in "Smash's" fictional play-within-the show, "Marilyn: The Musical."

Innocent, Iowan Karen Cartwright has lost, for now, the role of Marilyn Monroe to Ivy Lynn, a huge-voiced buxom blond with Broadway experience. Episode after episode the two women smile at each other as though smiles were knives, trading dirty looks, passive-aggressive niceties, and put-downs delivered in dulcet tones. Karen, envious of Ivy, has tried to outshine her; Ivy, threatened by Karen, has tried to get her kicked out of the show.

While Karen and Ivy have been asserting their dominance, the two real-life actresses who play them — Katharine McPhee, a former "American Idol" contestant given top billing in all of "Smash’s" promotional materials , and Megan Hilty, a Broadway veteran who was not — have been doing the same. The outcome of these two face-offs seems likely to be the same: The second banana is just about to steal the show.

In "Smash's" pilot, Karen was established as the series’ protagonist. She was the audience stand- in, the character new to this crazy Broadway world. She got more screen time and was given the climactic scene of the episode — a performance of Christina Aguilera’s “Beautiful” that wowed the casting directors and appeared in all of "Smash's" commercials. On paper, Karen has also been the nicer character: She’s a fresh talent who was almost good enough to land a huge role, but, having lost it, sucked it up and agreed to be a chorus girl, only to be persecuted by the woman who bettered her.

Ivy hates Karen and has rebuffed all of her peacemaking overtures. In the show's fifth episode, having been awkwardly commanded by the director to help Ivy with a song, Karen sheepishly says, ‘This is so silly, you sound amazing, I don’t know why you need to … ” only to have Ivy finish her sentence, dripping with condescension: “Take singing lessons from a chorus girl?”

But part of the fun of TV -- each episode its own brand-new piece of theater -- is that what's on the screen can be completely different from what's in the script, especially when the actors get to peacocking. Just as Seth and Summer charmed "The OC" away from Ryan and Marisa, and Blair Waldorf coolly hijacked "Gossip Girl" from Serena van der Woodsen, Hilty is sauntering off with "Smash."

Ivy’s behavior may be crueler than Karen’s, but Hilty imbues Ivy with a streak of fragility to go along with her brassy, bossy personality. Ivy's a major talent who is majorly insecure and majorly competent, while Karen seems to have a more minor version of both qualities. Ivy’s performing when she’s being such a bitch — checking herself in the mirror, scanning her audience, doling out the inclusive giggle as carefully as the icy put-down or occasional temper tantrum — and the fact that she’s so good at playing the diva seems more a credit to her craft than a knock on her true personality.

When Ivy takes the chorus girl shot at Karen it's because she's offended by Karen's undermining. Karen doesn't think she's doing anything of the sort; she would likely say she was just trying to be self-deprecating to make things less awkward. But because of Ivy's greater charisma it becomes almost impossible, for me anyway, not to see it from Ivy's perspective. She sees something darker and more ruthless in Karen than Karen is yet willing to see in herself.

And McPhee's performance belies that Karen is all good intentions. There’s a faint implausibility to Karen's innocence. She may be temporarily down on her luck, but she seems somehow implacable, impenetrable, unstoppable. She’s got the stench of Eve Harrington about her, which means she’ll probably end up as Marilyn — but not the audience favorite. McPhee may have become famous by playing nice and wooing large crowds on "Idol," but I bet she could excel as a love-to-hate-her type, if only she were allowed her to flaunt her inner, impressively mechanical steeliness, and stop pandering for the audience's sympathy.

Hilty also has McPhee beat when it comes to the singing. Her voice is the far more powerful and impressive instrument. McPhee is an anodyne performer, given to waving around her coltish limbs while singing slightly finessed, wan versions of pop songs from the likes of Adele and Florence and the Machine. Meanwhile, Hilty gets to sing, belting out the big, lavishly choreographed, original Broadway numbers. "Smash," a show about the glories of the great white way, has become a weekly example not only of the superiority of Broadway training (Hilty performed in "Wicked" for a number of years, as well as in Dolly Parton’s failed "9 to 5" musical) but of Broadway-style showmanship.

This meta-power struggle between McPhee and Hilty isn’t, as of yet, undermining the fun of watching "Smash": it just adds real-life frisson to the ongoing Karen-Ivy showdown. (And when it comes to "Smash" characters that need redressing far more urgently than Karen and Ivy, there's the wretched assistant Ellis, currently the pure personification of the evil, entitled millennial, and Debra Messing’s character's husband, a wholly insubstantial presence, who is, somehow, supposed to be holding up a corner of a love triangle.)