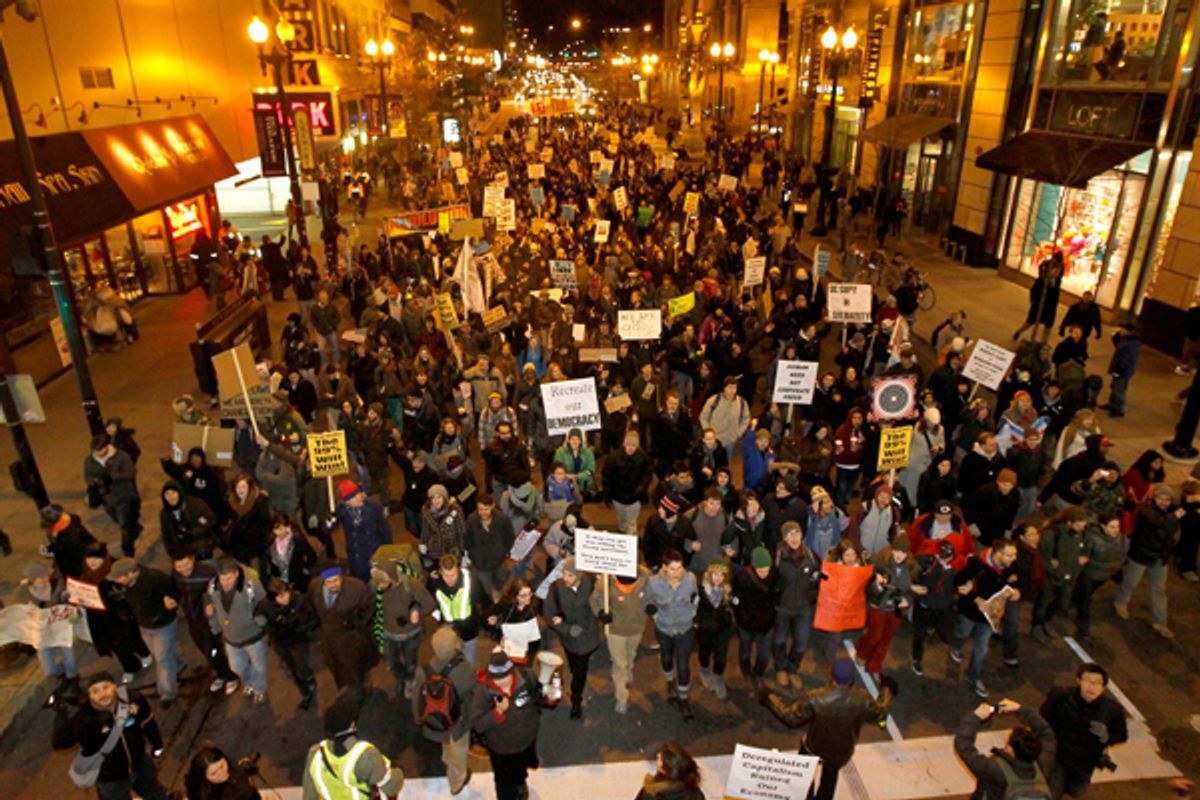 When the White House announced that the G-8 this coming May would be moved out of Chicago to the president's sequestered retreat at Camp David, protesters planning to hit the Windy City streets celebrated the move as a victory: It seemed the mere prospect of their presence, with numbers expected in the tens of thousands, had run the G-8 out of town.

Plus the NATO summit, planned for mid-May in Chicago, would still be occasion for massive protests in the city. But, adding to obstacles posed by a host of strict new rules for protests introduced by Mayor Rahm Emanuel, Occupy groups and allies planning mass anti-NATO street actions are running up against reams of red tape. While the city granted a parade permit for a group planning to march during the proposed G-8 summit, a request by the very same group to move the parade back one day to coincide instead with the NATO summit has been denied. According to the Chicago Tribune, city officials cited "a lack of police officers as well as other security and logistics complications" because of the first day of the NATO summit as the reason for the permit rejection. The presence of 5,000 NATO delegates will put the city on lockdown; a mass march that day, they suggest, would overwhelm security and transport resources. The original request for a permit the day before was approved, a Law Department spokesman told the Chicago Sun-Times, because the G-8 is significantly smaller than NATO.

Protest organizers are currently in discussions with city officials about alternative routes. However, it's worth noting that protesters may still march without official permits. Indeed, on the first day of the G-20 summit in Pittsburgh in 2009 an unpermitted march led by anarchists -- during which police used tear gas -- set a radical tone for the mobilizations, both permitted and unpermitted, that followed. Furthermore, the context of the upcoming NATO summit suggests unpermitted protests will hit Chicago. Occupy actions have encouraged individuals to reclaim space, take to the streets and speak out without asking permission. Many thousands of people -- beyond seasoned summit-hopping anarchists well versed in spontaneous direct action during political conferences -- are now open to the idea of dissent that is not circumscribed by city ordinances.

Mayor Emanuel and Chicago bureaucrats will no doubt build further barriers to hamper mass protest and prevent riotous scenes at all cost. But long-term anarchists and those radicalized by Occupy actions (and the harsh police responses to them) have again and again proved themselves willing to challenge authority and risk arrest and injury -- attempts to enact a "Chicago Spring" evidently will not be killed by 1,000 (bureaucratic) paper cuts. As Occupy Chicago's Twitter feed responded Tuesday to the news of the the parade permit rejection, "Think it will stop us? ;)".