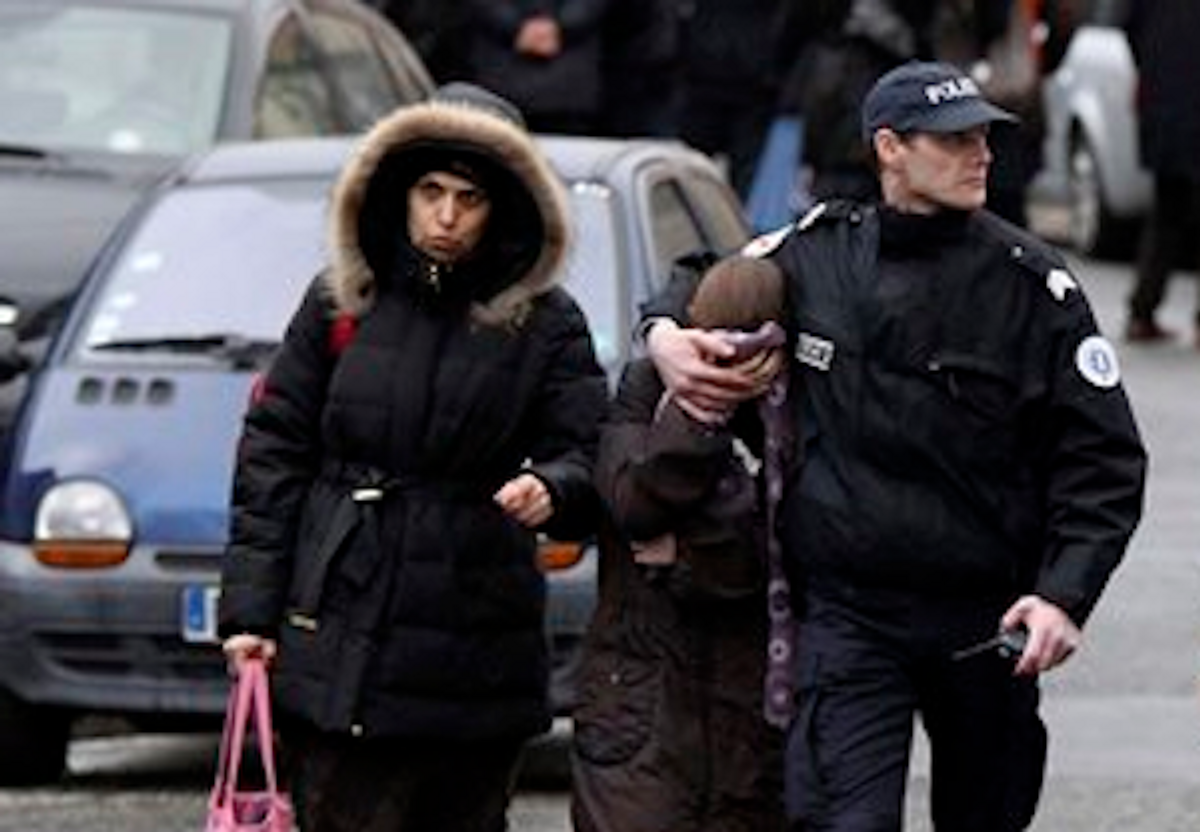 A student is flanked by an unidentified woman and a police officer as they leave a Jewish school after a gunman opened fire in Toulouse, southwestern France, Monday, March 19, 2012 (AP Photo/Manu Blondeau)
--

PARIS, France – France has launched a massive manhunt – and raised the terror alert in the Midi-Pyrénées region to its highest ever – after police linked Monday's shooting outside a Jewish school in Toulouse with similar attacks on French soldiers a week earlier.

14 police and gendarme units have been deployed to secure the south of France. Guards have been stationed outside Jewish and Muslim places of worship, and Interior Minister Claude Gueant has ordered tighter controls at airports and railway stations, France Info reported.

Religious schools are also under surveillance, with field trips and carnivals canceled.

It has now been confirmed that the school attack, in which a teacher and three children died, was carried out using the same .45 caliber pistol used to murder three soldiers of north African origin, in attacks in Toulouse and Montauban, 30 miles away, France Info reported.

There is speculation the attacks are race-related, and French media reports say police are searching for three former paratroopers who were sacked for alleged neo-Nazi activities.

Shocking details have emerged of Monday's attack at the private Ozar Hatorah school, in the Croix-Daurade neighborhood, when a gunman opened fire just before 8 a.m., before fleeing on a black motorbike.

His first victims were Jonathan Sandler, a 30-year-old French-Israeli teacher, and his two sons, Arieh, 5, and Gabriel, 4. They died outside the school when the gunman pulled up on his motorbike, dismounted and, without removing his helmet, "shot at everyone in his path," Le Nouvel Observateur reported.

The man then entered the school gates, where he approached 8-year-old Myriam Monsonego, the daughter of the school’s principal, and shot her at point blank range in the head.

Meanwhile, the president of France's Jewish Central Consistory, Joel Mergui, said the bodies of the four school victims will tonight be flown to Israel, where they will be buried, France Info reported.