Rick Santorum goes off the rails

He dismisses contraception -- and unemployment. He cheers religious bigotry, then doesn't. A campaign unravels 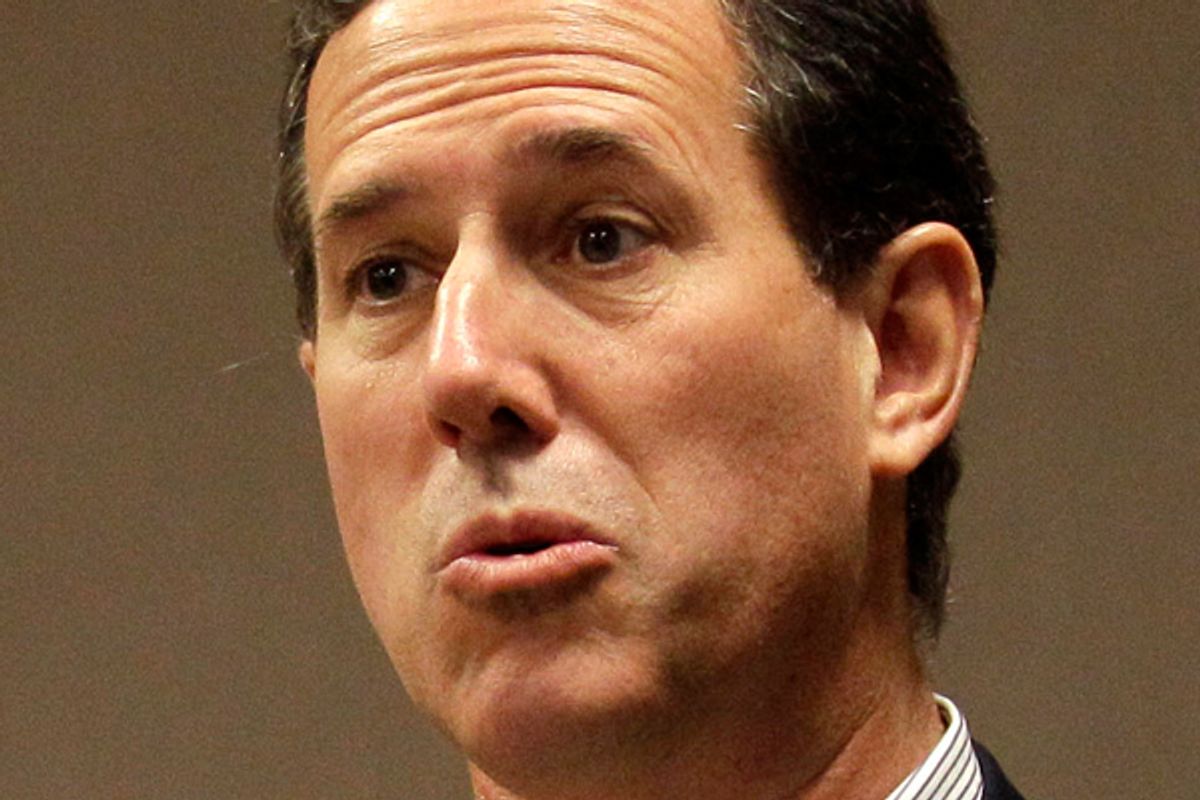 Rick Santorum started Monday picking a fight with a fellow Republican, MSNBC's Joe Scarborough, over whether the media have made too much of Santorum's anti-contraception beliefs to the neglect of other campaign issues. He ended the day insisting he doesn't care about the unemployment rate. The night before, he joined a standing ovation for extremist pastor Dennis Terry, who introduced him at a rally Monday by insisting that anyone who doesn't follow Jesus Christ can "get out" of the U.S. – and then he had to deny he agreed with Terry when reporters followed up. What a big 24 hours for Santorum's faltering presidential bid. As he heads into the Illinois primary, where he trails Mitt Romney in most polls, Santorum is looking less like a serious threat than he has since January.

If his campaign can't be defined by his stance on either contraception or unemployment, what's the rationale for Santorum's marathon and increasingly long-shot candidacy? Cheering on a Christian theocracy, and then quickly backpedaling, is as close as I can get. Dennis Terry's hysterical remarks should be chilling to anyone who values religious freedom, on the right or left (watch it here). Watching Santorum standing and clapping for the bigot made it more clear than ever that he can never lead this nation. The fact that he later backtracked and (sort of) said he disagreed with Terry's remarks doesn't erase the fact that when he heard them, he stood and clapped like all the other good Christians. This is the company Santorum keeps.

The right-wing Catholic's claim that his political enemies are keeping the contraception issue alive has always been specious, but it was particularly strange to watch him try to hang Scarborough with that agenda, too. The "Morning Joe" host, along with colleague Mika Brzezinski, admitted their show has featured a lot of criticism of Santorum's extremism on contraception, and they gave the candidate a chance to reply. Santorum insisted that the only issue he cares about is the "violation of the First Amendment" represented by President Obama's requirement that insurance companies offer cost-free contraception. When Scarborough pushed a bit, pointing to a video interview five months ago in Iowa, in which Santorum said he'd be the only presidential candidate to talk about contraception and called it "not OK," Santorum insisted, "I wasn't talking about access to contraception … I was talking about the breakdown of the nuclear family."

But even after Scarborough and Brzezinski agreed to leave the issue, Santorum couldn't let it go, accusing them of trying to "pigeonhole" and "stereotype" him. Scarborough hit back, asking his former House GOP colleague: "Do you think I'm trying to pigeonhole you and stereotype you?" noting they had much the same stance on social issues when in Congress.

"Well, yeah, you keep bringing it up," a sulky Santorum replied. The MSNBC host wasn't having it.  "I was ready to move on, and you said I was trying to pigeonhole and stereotype you … I have no reason for doing that."

It was fun TV.

But even as Santorum was insisting the media kept the contraception issue alive to "stereotype" him and ignore important issues, he told an Illinois audience "I don't care what the unemployment rate is going to be. It doesn't matter to me. My campaign doesn't hinge on unemployment rates and growth rates." He then went into a long digression about how Romney's professing to care about unemployment means he's not a conservative, because a real conservative doesn't believe the president has anything to do with unemployment. Then why have he and all the GOP candidates attacked Obama for high unemployment – at least until the rate began coming down? I know, it makes no sense. But now we know Santorum doesn't care about contraception or unemployment, supposedly. The rationale for his candidacy wanes.

His low point, though, came Sunday night, when he stood and clapped while Rev. Dennis Terry gave one of the most bigoted speeches of the entire campaign – and that includes some of the humdingers the various backers of Gov. Rick Perry delivered last summer. Terry told Santorum's Louisiana audience:

What a bigoted loon. When reporters asked Santorum whether he agreed with Terry's spew, he formed a pretzel, and seemed to repudiate it convolutedly. Here's how the New York Times parsed it:

"If the question is, do I agree with his statement that America shouldn’t do that?” Mr. Santorum asked in response to the reporters’ questions. “No, if he was speaking for himself he’s obviously allowed to believe what he wants to believe but, obviously I believe in freedom of religion and all religions are welcome and should be. I think I’ve made that pretty clear throughout my campaign that I believe very much in freedom of religion, and folks should be able to worship whoever they want to worship and bring their thoughts in the public square."

The other big news in GOP politics today was the continuing unfolding reaction to Sen. John McCain repudiating the Republican "war on women" Sunday on "Meet the Press." Excuse me if I'm not fully grateful for McCain's allegedly brave stance. The man professed to believe that women have the right to their own decisions on contraception, but didn't mention that he voted for the Blunt Amendment, which would have given employers the right to deny contraception coverage if they didn't approve of it – in fact, to deny coverage of any treatment they personally disdained. What hypocrisy.

I talked about the day's GOP unraveling with Bill Burton on MSNBC's "The Ed Show."