The coming fight over violence against women

Republicans are determined to demagogue the Violence Against Women Act. They're wrong on the politics and the facts 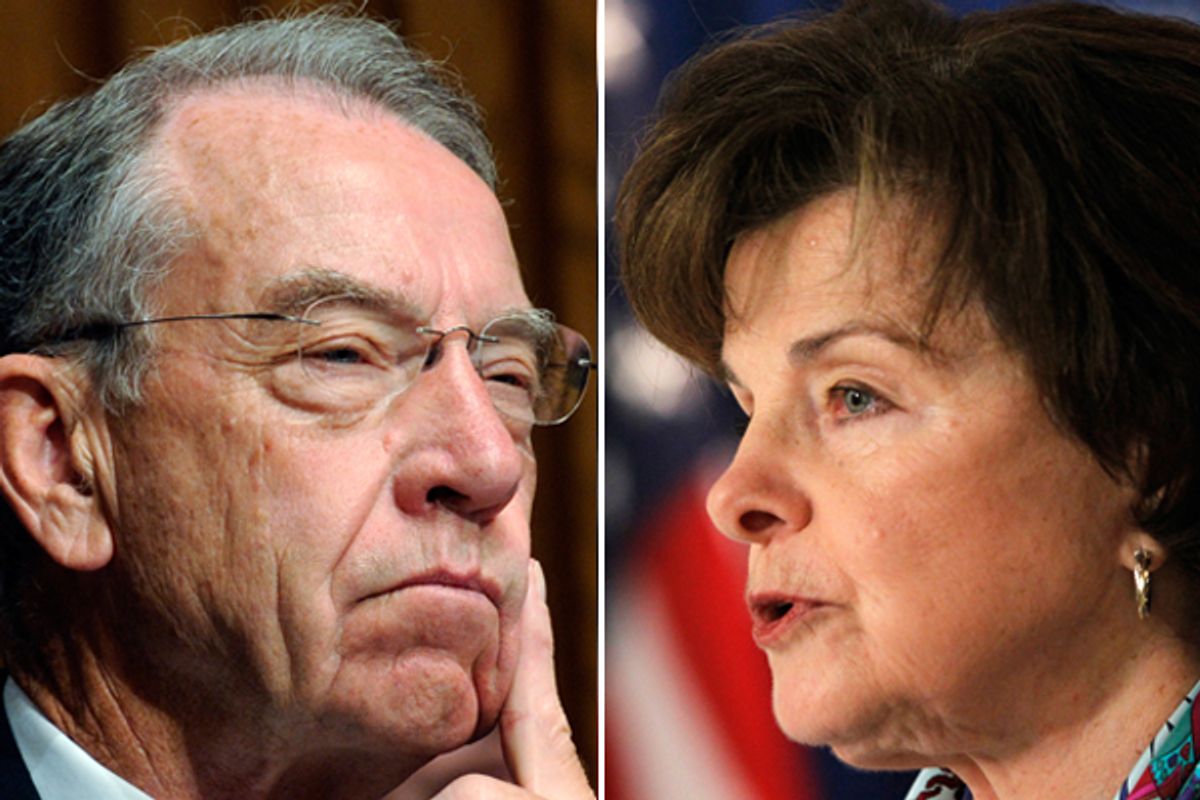 Reauthorizing the once-bipartisan Violence Against Women Act used to be a matter of Senate routine, but it has now gone the way of debt-ceiling negotiations -- into the trenches of partisan warfare. Reading recent reports of the coming Capitol Hill showdown on the VAWA, you would either conclude that Republicans are broadening their assault on women, or Democrats have politicized the bill with various poison pills involving LGBT rights, immigration and Native American communities. What gets lost in both explanations is the merits of the actual changes.

While VAWA has not yet faced a full Senate vote, all Republicans on the Judiciary Committee voted in February against reauthorization. Democrats are clearly trying to use this to capitalize on the recent interest in Republican misogyny, which, legislatively speaking, has become mainstreamed in the party. Sen. Dianne Feinstein asserted on the Senate floor last week that “This is one more step in the removal of rights for women.” Majority Leader Mitch McConnell shot back Thursday, citing a Politico article to suggest Sen. Chuck Schumer “is sitting up at night trying to figure out a way to create an issue where there isn’t one … to help Democrats get reelected.”

The Democrats’ latest land mine, according to McConnell and his caucus, is to have quietly made VAWA a vehicle for radical causes. Sen. Jeff Sessions complained, “You think they might have put things in there we couldn’t support that maybe then they could accuse you of not being supportive of fighting violence against women?” Sen. Chuck Grassley has accused Democrats of adding specialized provisions about same-sex partner violence, immigration and Native American jurisdictional issues that are “not consensus items,” to make Republicans look pro-domestic violence.

See if you can make sense of the following Grassley condemnation: "The substitute creates so many new programs for underserved populations that it risks losing focus on helping victims, period … If every group is a priority, no group is a priority." Apparently, victims can’t come from underserved populations – or be particularly vulnerable because of it.

Then there is the faction of the Republican base that has always opposed VAWA, well before the recent measures. It made its opinions known in a Feb. 2 letter to the Senate Judiciary Committee signed by groups including the Family Research Council, claiming VAWA “destroys the family by obscuring real violence in order to promote the feminist agenda.” One of the signatories to the letter, Janice Shaw Crouse, senior fellow of Concerned Women for America’s Beverly LaHaye Institute, recently elaborated, saying VAWA “offers women both a ‘tactical advantage’ and a ‘powerful weapon’ when they want to ‘get back’ at a man, have regrets the next morning, or want out of a marriage for any reason at all.” (It’s not clear where any of these scare quotes come from.)

Notably, they didn’t mention the LGBT, immigration or Native American-specific provisions, though the letter did warn darkly that the reauthorization would “add expensive new programs, such as one that would serve to ‘re-educate’ school children into domestic violence ideology.”

It helps then, amid the uproar, to remember what it is, exactly, that VAWA does, and understand how its supporters have proposed to modify it. Before its passage in 1994, not all states had stalking laws, and many had weaker laws on sex crimes, both of which got an indirect push from the federal law. So did funding to help training and collaboration between law enforcement, shelters, and medical professionals. “Before, it felt like each person, each department was [dealing with victims] in a vacuum and not talking to one another,” says Sue Else, president of the U.S. National Network to End Domestic Violence.

Since its passage, the Network reports a 51 percent increase in reporting by women and 37 percent increase in reporting by men, who, despite the act's title, are also covered under it. At the same time, the number of individuals killed by intimate partners has decreased, by 34 percent for women and by 57 percent for men. (The more dramatic figure for men may be due to a smaller overall figure being more sensitive to percentage shifts; Else also suggested in an interview that women now have more recourse before reaching a desperate situation.) An increase in protection orders, says Else, has lowered the number of instances of domestic violence, in the process reducing law enforcement and hospital costs.

The new VAWA is not as radically different from earlier versions as Republicans suggest. Longtime advocates of the law argue that the expansions for these groups are incremental. “It’s not so much novel as it is an evolution,” says Lisalyn R. Jacobs, the vice president for government relations at Legal Momentum, who has worked on VAWA since just after President Clinton signed it in 1994. “Over the course of 18 years, obviously we’ve learned a lot.” Previous versions of VAWA already included some separate provisions for Native women. Groups that work with LGBT populations already get VAWA funds in many cases. And the U.S. already issues 10,000 U visas annually for the abused immigrant spouses of citizens. The new version of VAWA would add 5,000 visas a year, “a smaller increase than has been requested by the Secretary of Homeland Security,” according to a memo from sponsor Sen. Patrick Leahy’s office.

Advocates sound exasperated that their years of effort have been ensnared in political maneuvering. Take the provisions about Native American women, who suffer domestic violence at a far higher rate than the general population, and who have been separately addressed in VAWA since its first version. “[Republicans] would leave you with the impression that this VAWA is unique in its focus on the particular needs of Native women,” says Jacobs. “Nothing could be further from the truth.” The new bill simply eliminates the hurdle for Native women married to non-Native men, as 51 percent of Native women are, and living on reservations that requires them to report abuse to non-Native law enforcement. Instead, it gives some authority to tribal authorities in responding to a domestic violence report.

“With particular respect to the Native issues,” says Jacobs, “we did not have a clue that [Grassley] had any issue about that until we got to the markup last month. Any number of people had met with his staff on numerous occasions” without hearing about any objections.

As for the immigration issue, Grassley said recently that “the questions had to do with the additions that have been made to this bill related to illegal immigrant visas.” Under the assumption that women pretend to be abused rather than be deported, Grassley tried unsuccessfully to force an amendment that would have required that the crime be reported within 60 days and that it be under active investigation, making it significantly more difficult to qualify.

But the visas already long made possible by VAWA are fairly narrow in scope: The abused immigrant spouse, child or parent has to have lost status due to domestic violence in a marriage to a U.S. citizen, and therefore be eligible to petition directly to the Department of Homeland Security to qualify for a new visa. The additional 5,000 visas will help clear the backlog that has built up due to bureaucratic red tape.

These U visas, initially created by the Victims of Trafficking and Violence Protection Act, also aid in law enforcement purposes. As Jacobs puts it, “The green card can become a weapon of abuse; for example, ‘Go sell drugs for me or I’ll withdraw your petition.’”

Finally, there’s the assumption that there is some sort of vast expansion of resources or recognition to LGBT communities. In fact, VAWA grants administered by the states have gone to groups that have served LGBT communities for years; separately, in 2010, the Justice Department issued a memo clarifying that criminal provisions in VAWA apply regardless of gender or sexuality. What’s new in the most recent VAWA is the anti-discrimination language, saying that grantees can’t discriminate on the basis of sexual orientation or gender identity. Like the new measures for immigrant and Native American women, the new language doesn't reinvent the wheel. Says Jacobs, “While we knew that same-sex relationships were not the favorite things of lots of people on Capitol Hill, we didn’t think we were breaking a lot of new ground.”

While Republicans on the Senate Judiciary Committee were recalcitrant, the current bill still has Republican co-sponsors and supporters, including Alaska Sen. Lisa Murkowski, who publicly recanted her party-line vote on contraception and who joined the Senate women on the floor in support of VAWA. According to the New York Times, she warned her party in a closed-door meeting that if it picked this battle, it would cede the Democrats' war on women line. Meanwhile, the Republican National Committee seems to hope it can pull an "I know you are but what am I" on the Democrats with women. It recently released a video claiming it was Obama who was attacking women, mostly because he took money from Bill Maher. Best of luck with that one.