His snake oil-castor oil budget is a gift to Dems, but only if they give up on "grand bargains" with extremists 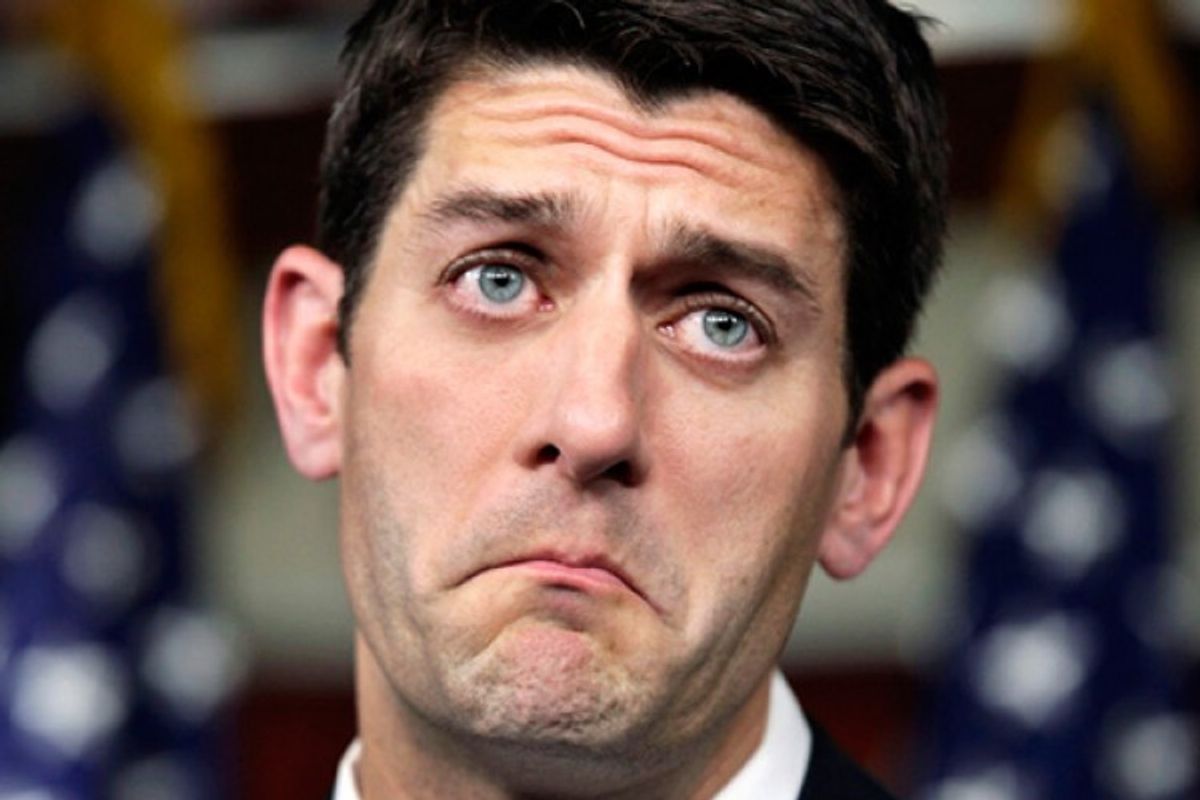 Most Democrats rejoiced when the newly elected House Tea Party extremists got behind Paul Ryan's tax-slashing and program-cutting budget plan almost a year ago. The budget had no chance of passing the Senate, but it committed Republicans to unpopular spending cuts, including to Social Security and Medicare, and continued the party's slavish devotion to tax protection for the top 1 percent. That's why many liberals were horrified by reports that the White House was entertaining comparable budget-cutting proposals to resolve the debt-ceiling crisis last summer. Not only was it bad policy, it was terrible politics, sacrificing the huge advantage Republicans had conceded when they backed Ryan's plan, especially his assault on Medicare.

The debt ceiling "grand bargain" failed. President Obama learned from the debacle and switched his focus to job growth from deficit-cutting. But the Ryan plan, with its political benefits for Democrats, also receded from the front pages. Until now, that is. Ryan brazenly released the 2013 version of his budget this morning. It's a cocktail of snake oil and castor oil. It proposes $1.028 trillion in discretionary spending, less than the $1.047 trillion spending cap established by the debt-ceiling deal, repeals Obamacare, and cuts the top individual tax rate and the corporate rate as well. It aims to replace Medicare with a voucher plan again. Ryan says all of the GOP presidential candidates are down with his budget proposal. "I have spoken to all of these guys and they believe we are going in the right direction," he told reporters. That's great news for Democrats.

Unfortunately, the new Ryan plan comes on the heels of bad news from the Washington Post: a closely reported story about last summer's debt-ceiling negotiations, which brought back the bad old days when the president was indulging the ideas of Ryan and friends to avoid defaulting on our credit obligations while also becoming the champion of fiscal prudence.

If you believe the Post's reporting – its slant places most blame for the deal's troubles on Democrats, but the key facts come from participants' notes, emails and on the record recollections – the "deal" Obama entertained was worse than anything reported at the time: $1.2 trillion in spending cuts, reduced cost-of-living adjustments for Social Security and an unspecified hike in the Medicare eligibility age, in exchange for around $800 billion in "revenue" that relied on closing "loopholes" and (possibly) increased tax receipts thanks to an improved economy, while actually lowering top rates. What finally scuttled the deal was the work of the so-called Gang of Six – three senators from each party, whose proposal contained much bigger tax hikes and revenue increases, plus smaller spending cuts, than the Obama team had negotiated.

"I don’t think it was a mischaracterization on our part to say we’d be beat up miserably by Democrats who thought we got out-negotiated," former White House chief of staff Bill Daley told the Post. The Gang of Six deal forced the embarrassed White House to ratchet up its tax-hike demands, and the bargain fell apart – but not before Obama reportedly called Boehner and offered to take the horrible pre-Gang of Six, no-tax-hike deal. The most ominous line in the entire piece: "White House officials said this week that the offer is still on the table."

Let's hope that's not true. The Obama White House made a convincing pivot back to economic growth after its summer humiliation. I'm a big believer in forgiving, if not forgetting. We've all made mistakes. New York's Jonathan Chait wrote about the Post piece Monday with surprising outrage, given his many essays chastising liberals and progressives for being too hard on the president. "Obama’s disastrous weakness in the summer of 2011 went further toward undermining liberalism than anybody previously knew," he railed. I think a lot of us knew it, even if we didn't have the ugliest details, and we tried to tell Chait at the time.  But I'm ready to let bygones be bygones.

Democrats are being given another gift with the new Ryan budget, especially given its new assault on Medicare. I don't care what Politifact or Rep. Ron Wyden (who co-sponsored Medicare cuts with Ryan) try to say: By giving seniors vouchers to purchase insurance on the private market, the plan would abolish Medicare. Because let's be clear: Vouchers aren't Medicare. In fact, Republicans and private insurers tried for years to create a program for elderly Americans that would run as a voucher plan, or otherwise funnel seniors into private insurance; in 1965 Democrats under Lyndon B. Johnson rejected that route in favor of a federal government-run program they called "Medicare." The GOP is against it, plain and simple. (Ryan and Wyden's plan would supposedly allow seniors who chose to to stay in a government-run plan, but how long would that hybrid exist? And how much would it cost; Medicare's main efficiencies come from the fact that all seniors participate.)

Democrats need to stop sabotaging themselves and undermining their party's signature accomplishments, including Medicare. The program needs reforms, but they will not be accomplished as long as the extremist wing of the GOP is in control. I think the president learned that the hard way, and I trust he'll remember the lesson.

I'll be talking about the Ryan budget and 2012 presidential politics on MSNBC's "Politics Nation" with Rev. Al Sharpton at 6 ET.