What the GOP doesn’t get about deficit politics 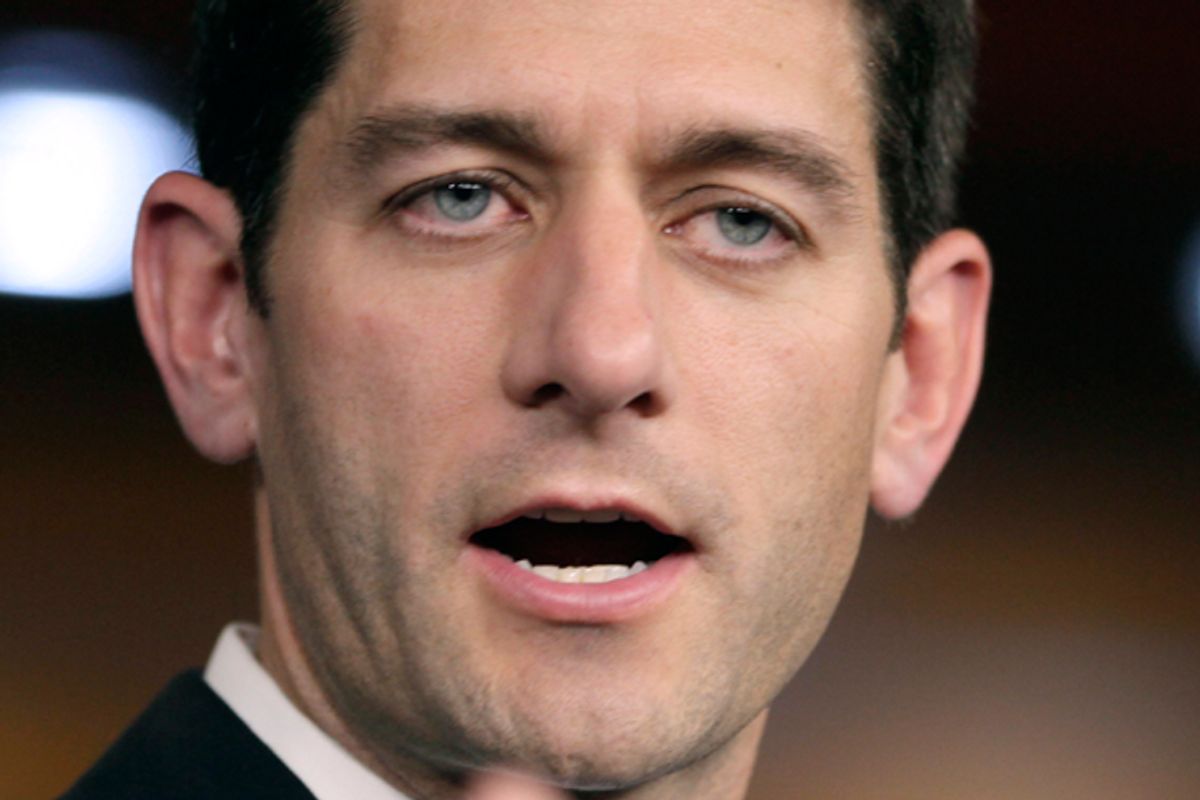 Apparently, the line from House Republicans is that the public's concern over the size of the deficit will shield them from Democratic attacks on the budget plan that Rep. Paul Ryan laid out this morning.

It was Ryan, of course, whose proposal last year to essentially turn Medicare into a voucher program was embraced by virtually every Republican in the House, causing immediate damage to the GOP brand and raising Democratic hopes that the issue would return them to majority status in the 2012 elections. That Medicare plan died in the Senate, as everyone knew it would, but now Ryan is back with a more wide-reaching budget blueprint, one that includes a modified Medicare proposal and that, in the words of one conservative opinion leader, will function as "the standard for conservatives and Republicans going into this election season."

Just like last year, Democrats are warning that Ryan and the GOP want to "end Medicare as we know it" and expressing hope that the issue will turn swing voters against the GOP. The opening line from today's New York Times summarizes the House GOP's response to this:

House Republicans, believing that worries over the deficit will trump affection for Medicare and other popular programs, unveiled a federal budget blueprint Tuesday morning that would cut deeply into domestic spending, transform the tax code and balance the budget by 2040.

It may be that the Republicans who are saying this don't actually believe it -- that they fully realize Ryan's plan is a political gift to Democrats but that they feel compelled to support it anyway to prove their "purity" and to avoid being targeted by angry right-wing activists. But if they actually think that the public really cares -- or knows -- that much about the deficit, then they've been ignoring the past few decades of American politics.

The pattern is actually quite clear. When the economy is in rough shape and one party starts making noise about large deficits, voters invariably tell pollsters that they are concerned, creating the impression that there's a widespread sense of urgency on the issue. But what's actually going on is simpler. To most voters, the term "budget deficit" comes with exclusively negative connotations, so of course they think it's a bad thing when the government is running one. And when they're already filled with economic anxiety and angry at their government's apparent inability to alleviate it, it's only natural that they'd assume deficits are part of the problem.

The key here is that public concern over deficits is always an expression of a much broader public concern about the state of the economy. If the economy improves, deficit panic dies down -- even if nothing's actually been done to address the deficit. This was the story of Ronald Reagan's presidency. His tax cuts and defense buildup resulted in massive deficits early in his term, and Democrats embraced the issue as their chief indictment of the president. It seemed to work, too, when Reagan's approval rating slid under 40 percent and the GOP suffered a midterm drubbing in 1982. But something changed in 1983: Even as the Reagan deficits soared to new heights, the economy turned around, Reagan's approval numbers came back to life, and Democratic warning about red ink and looming bankruptcy fell on deaf ears. In the final weeks of his ill-fated campaign against Reagan, Walter Mondale dropped the subject altogether -- even though it had been one of his centerpiece issues when he'd set out to run.

Republicans learned Mondale's lesson in 1995, when they forced a confrontation with President Clinton over -- what else? -- Medicare. Led by then-Speaker Newt Gingrich, the House GOP sought $270 billion in cuts to the program, all in the name of balancing the budget by 2002. This came just a few years after deficit talk had dominated the 1992 presidential election, when Ross Perot netted nearly 20 percent of the vote after talking up the issue relentlessly. So Gingrich and his revolutionaries concluded that they were on relatively safe footing in making their Medicare push. After all, polls still showed that Americans hated deficits. But it wasn't really deficit panic that had fueled Perot's rise (and George H.W. Bush's defeat) in '92; it was the popular anxiety created by a lousy economy. The GOP went ahead and passed its plan anyway, a government shutdown ensued, and the issue haunted Republicans up and down the ballot in the 1996 campaign. When you get down to it, people care a lot more about Medicare than they do about the deficit.

For that matter, Barack Obama discovered the same thing last year, when he dedicated himself to becoming America's deficit-reducer-in-chief -- a response to polling on the issue and to a belief that it had been key to the GOP's 2010 midterm landslide. But his months-long pursuit of a "grand bargain" with House Republicans actually ended with some of the worst polling numbers of his presidency. Not coincidentally, this coincided with some of the most discouraging economic news of his presidency.

The '90s provided another important political lesson about deficits: People don't actually notice when they go down. When Clinton and the GOP had their showdown, a poll found that 49 percent of voters believed the deficit had risen in each of Clinton's three years as president. In fact, it had fallen each year, from nearly $300 billion when he came to office to around $60 billion at the end of '95. But only one in five voters knew this. If deficits alone mattered to voters, Clinton would have paid an enormous political price for this inaccurate perception. The economy was steadily improving, though, so he didn't.

There's no reason to think anything is really different now. In other words, Republicans aren't going about to get political credit for going after an enormously popular government program by claiming it's part of an effort to address an issue that doesn't actually mean anything to most people.