Did Sgt. Bales have help? 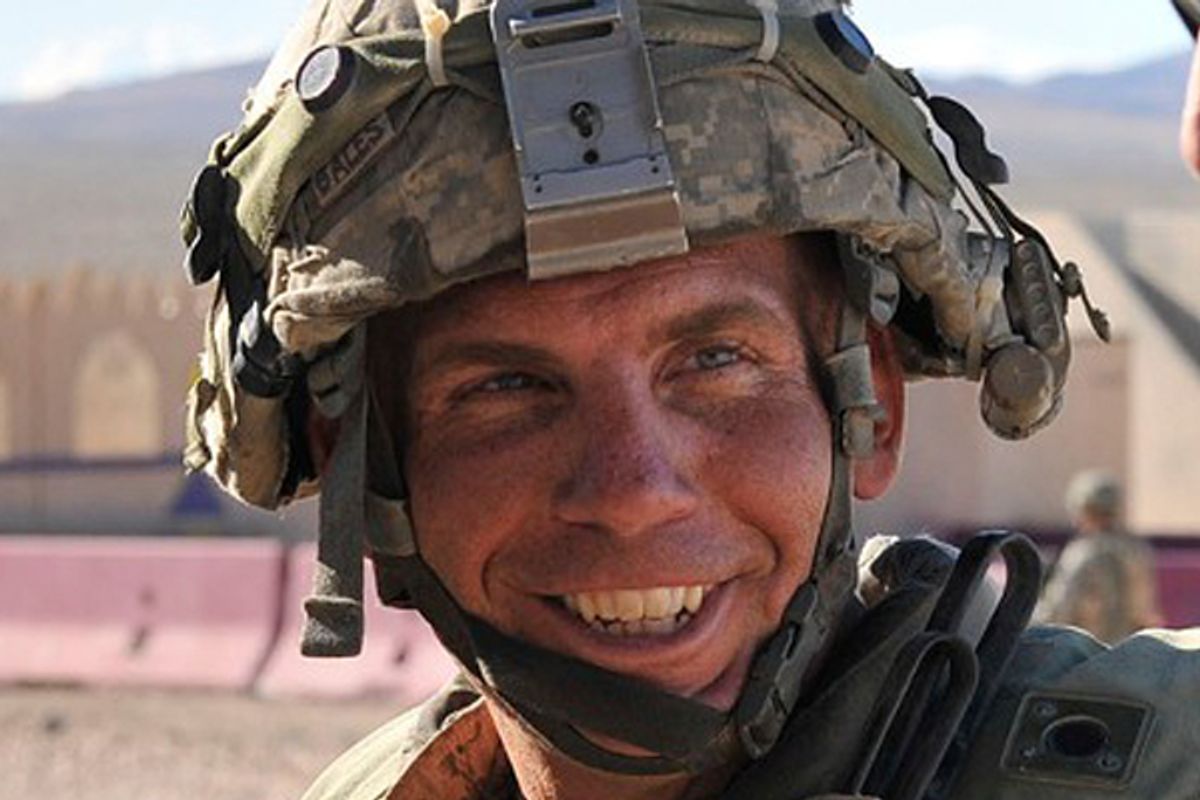 It's a familiar argument in the annals of American violence: is some specific heinous deed the work of a disturbed individual acting alone? Or is it the work of unidentified conspirators? That's the question hanging over the case of Sgt. Robert Bales, accused of killing 16 Afghan civilians last weekend. With U.S. officials releasing no information on how many soldiers are under investigation, it is premature to rule out the possibility that Bales had no accomplices.

A group of Afghan parliamentary investigators has concluded that Bales was part of a group of 15-20 soldiers. As Outlook Afghanistan reported Monday, "The team spent two days in the province, interviewing the bereaved families, tribal elders, survivors and collecting evidences at the site in Panjwai district." One of the parliamentarians told Pajhwok Afghan News that investigators believed 15 to 20 American soldiers carried out the killings.

"I have encountered almost no Afghan who believes it could have been one person acting alone, whether they think it was a group or people back at the base somehow organizing or facilitating it," Kate Clark of  the Afghanistan Analysts Network told the Guardian. (The AAN is funded by four Scandanavian governments, all of which have troops in Afghanistan).

By contrast, few U.S. news account question that the massacre was the work of one man acting alone. In the U.S. media accounts Bales is described as the proverbial "lone nut," a man under pressure from former investors and foreclosing banks who may have had too many tours of duties and too many drinks. In testimony to the House Armed Services Committee today, Gen. John Allen, commander of the international forces in Afghanistan, emphasized the singular nature of Bales' actions. "We are now investigating what appears to be the murder of 16 innocent Afghan civilians at the hands of a U.S. service member," he said. Allen also announced a separate administrative investigation into "command relationships associated with [Bales'] involvement in that combat outpost," which suggests the scope of the probe may be broadening.

"He just snapped," an unnamed senior U.S. official told the New York Times. “When it all comes out, it will be a combination of stress, alcohol and domestic issues." This official's comments reportedly drew from "accounts of the sergeant’s state of mind from two other soldiers with whom he illicitly drank alcohol on the night of the shootings, the official said, and those soldiers face disciplinary action."

Leave aside this official's willingness to draw sweeping conclusions from limited evidence. The passing admission that two other soldiers face disciplinary action for drinking with Bales on the night of the massacre might cast doubt on the notion that no one else knew what Bales was going to do. Army spokeswoman Lt. Col Amy Hannah said in telephone interview that she could not confirm the Times' account. "I am not aware of any releases of information" about other soldiers facing disciplinary action, Hannah said. If the U.S. official's remarks to the Times were accurate, then the Army is refraining from disclosing how many soldiers are under investigation.

Then there is conflicting eyewitness testimony. In this CNN video, one man describes the actions of a group in carrying out the killings. "They took him my uncle out of the room and shot him," he says. "They came to this room and martyred all the children." But one boy seen on the tape says there was only a single gunman. Still other witnesses pointed out a place outside the home, where they said they found footprints of more than one U.S. soldier.

Journalists seeking to clarify the question have been thwarted. In Afghanistan, Pajhaowk Afghan News reports that Lewis Boone, the public affairs director for coalition forces, declined to answer questions about the massacre, saying that a joint Afghan-ISAF team was investigating the killings. As the Seattle Times noted yesterday, the Army has been struggling "to regulate information on the Afghanistan suspect."

Ryan Evans, who worked with ISAF in Afghanistan and is now a research fellow at the Center for National Policy in Washington, said the thought "a cover up is very unlikely."

"I think the most likely story is that Bales was acting on his own," he said in an email, "but that either (a) he was using multiple weapons systems and using standard small unit tactics (basically re-positioning and moving around) which gave the illusion of a larger force or (b) the local ODA went out looking for him at some point and people saw them or (c) a mixture of the two."

That may be, but the military's silence is only fueling alternative theories. "An attack carried out by a group can worsen Kabul-Washington relations more than it is now," says Washington-based Afghan journalist, Farzad Lemeh. "Secondly, it would affect all U.S. military for showing mismanagement."

With the Obama's Afghan war policy facing another crisis, it is understandable that the White House and the Pentagon want to control the story. But the evidence does not entirely support the narrative they're pushing.