How Breitbart and Arizona seized on "critical race theory"

Even before Andrew Breitbart seized on it, conservatives were attacking "critical race theory" in Arizona schools 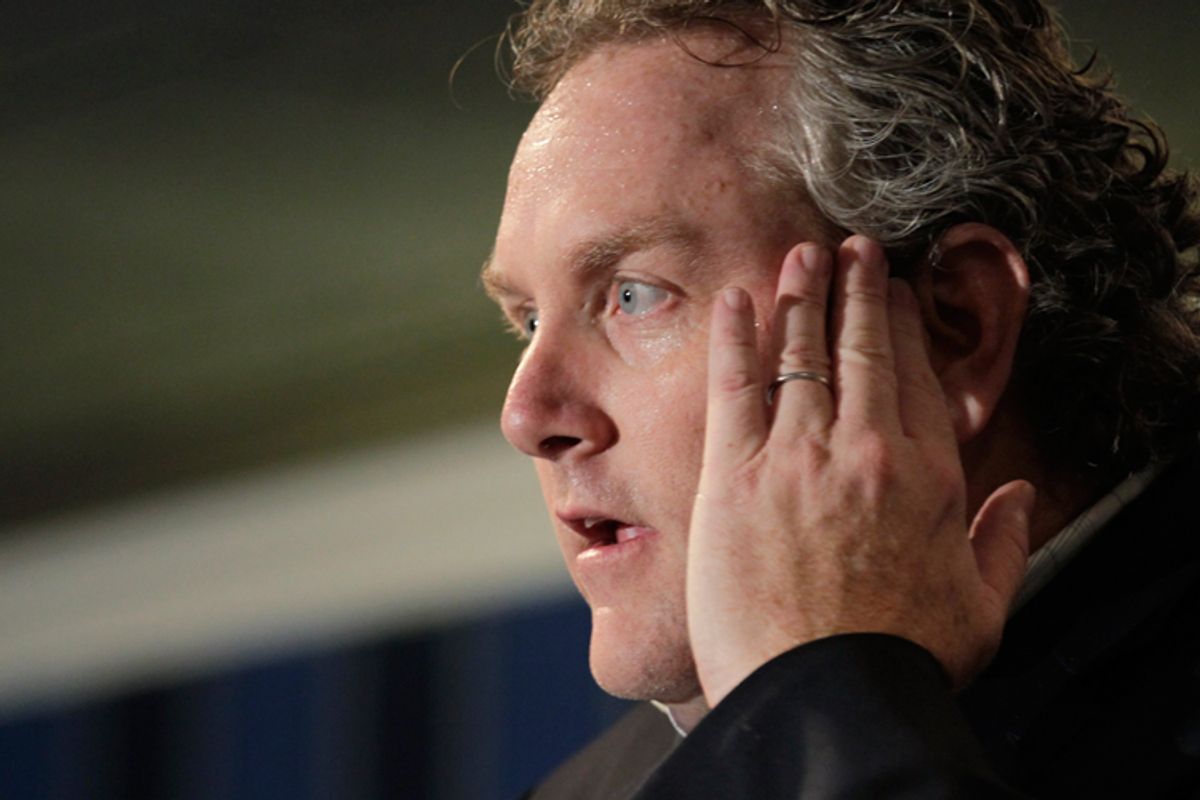 In conservative quarters, the hug made famous this month by disciples of the late Andrew Breitbart was more than a hug -- it was an embrace by a young Barack Obama of Harvard professor Derrick Bell’s supposedly radical and nefarious worldview: critical race theory. The theory, which analyzes how a colorblind legal system can be used by the privileged class to entrench its power, is “radical” only in a postmodern academic sense, not in its tactics -- its soldiers wear tweed and wield the Chicago Manual of Style, not black bandannas and molotov cocktails.

Liberals were quick to mockingly dismiss “hug-gate,” and the scandal largely fizzled in the mainstream press. But this likely won’t be the last we hear of critical race theory before November from the right. Already, conservatives’ menacing interpretation of the theory has shaped policy in some places, suggesting that critical race theory may be on its way to joining the pantheon of right-wing bugaboos.

In January, a new law went into effect in Arizona that prohibits schools from offering courses that “advocate ethnic solidarity instead of the treatment of pupils as individuals.” While the legislation doesn’t specifically mention critical race theory, it quickly landed on the state’s blacklist when officials cracked down on Tucson’s Mexican-American studies program, which former state superintendent Tom Horne had been trying to undermine since 2006 after its students dealt him a personal insult. The Republican finally succeeded with HB 2281, the ethnic studies bill that he authored, when it passed just 20 days after the state’s now-infamous anti-immigration law.

Horne subsequently ruled that Tucson’s program violates his law, citing its teaching of critical race theory. This “racist propaganda,” as Horne described it in his decision, is “fed to young and impressionable students, who swallow [it] whole.” Horne concluded that it was his “duty ... to put a stop to this.” Among the books culled from Tucson's schools when the program got axed were Shakespeare’s "The Tempest" and "Mexican WhiteBoy," a young adult novel by Matt de la Peña that deals with familiar themes like growing up, not fitting in and baseball. “The novel’s story is pretty much the American dream,” the New York Times noted Sunday. Nonetheless, it was embargoed for allegedly propagating critical race theory. De la Peña spoke at Tucson High last week, and used his speaking fee to purchase copies of his contraband book for students. Earlier this month, activists organized a scheme to distribute blackballed books, calling themselves “Librotraficante” -- book traffickers.

But critical race theory was virtually unknown outside of universities until Arizona and Breitbart made it famous, as Google Trends show. Breitbart’s crew took a page from Horne’s book, using similar mischaracterizations of CRT to portray it as a “a deeply disturbing theory.” Breitbart.com went all in. A search of the site for “critical race theory” returns an astonishing 871 results, over 680 from the past month alone.  Other conservative blogs and pundits, including Fox News’ biggest guns, took up the baton and soon CRT was everywhere.

Over 20 articles on Breitbart’s site are just about CNN anchor Soledad O’Brien, who criticized  editor Joel Pollak’s “complete misreading of critical race theory” on live TV. Conservative pundits pounced on O’Brien for defending the theory, even calling her “anti-Semitic.” (Incidentally, Horne was forced to resign from the board of the local Anti-Defamation League over his support for the ethnic studies ban.)

“If I were to look for a connection ... it would be a perplexity over minority success,” Richard Delgado, one of CRT’s most prominent proponents, told Salon. Delgado, who has two books that ended up on Arizona’s blacklist, said, “You have Obama in the presidency, and it’s starting to look for the first time like he’s going to win [again] … The Republican Party is in disarray, the economy is improving, and they’re thinking, ‘Dammit, this is not the way things are supposed to go.’”

As for Arizona, Delgado said Tucson found a kind of “magic” with its Mexican-American studies program that made Latino kids interested in education like never before. Indeed, Tucson schools chief John Pedicone said students who took courses in the program earned higher scores on state standardized tests, were more than twice as likely to graduate from high school and were three times as likely to go to college.

Asked about the program’s high achievement, Arizona Department of Education spokesman Ryan Ducharme dismissed the figures as “propaganda.” “It’s obviously coming from a biased source,” Ducharme told Salon, noting the studies were conducted by the program itself.

An independent study conducted by an auditor hired by Ducharme’s boss, current superintendent John Huppenthal -- who took over after Horne became attorney general last year -- found similar results. But the state dismissed this finding as well because it relied on numbers supplied by Tucson’s program, Ducharme explained. In fact, the audit Huppenthal ordered and paid $110,000 to conduct “found no evidence that the program is in violation of state law and even recommended that the courses be maintained as part of the district's core curriculum.”

“This history is frightening to people in power there,” Jean Stefancic, another prominent critical race theorist and close collaborator of Delgado’s, told Salon. Noting that the Hispanic population in Arizona is growing rapidly, she said, “There’s a lot of fear [that] when they decide to vote and they run candidates, what kind of legislators or decision makers will they be? Will they be fair to the people that find themselves in a minority situation? Will they be fair to the rest of us?”

But beyond the electioneering, the use of critical race theory as a political cudgel may have a chilling effect when it comes to talking about race at all. Several of the critical race theorists I spoke with -- who are generally known for their outspokenness -- were wary to talk on the record in the wake of the Breitbart video. Two preferred not to speak on the record at all.

Just as talking about income inequality can get you branded as a socialist by the right today, talking about racial inequality on a systemic level can lead to charges of reverse racism against whites. And the ultimate irony of having a black president is that it may make it harder for him to discuss race. The killing of Trayvon Martin has sparked national outrage and a heated debate over race, but the White House responded timidly. “Obviously, we're not going to wade into a local law enforcement matter,” White House spokesperson Jay Carney said Monday. But that policy didn’t apply to Henry Louis Gates’ run-in with Cambridge police just three years ago. Obama publicly condemned the police in the case, and was pilloried by the right for it.

Stefancic said Martin’s case is a perfect example of the importance of critical race theory. Without a racial lens on the incident, it would be a narrow legal question about Florida’s “stand your ground” self-defense laws. But critical race theory allows us to see the whole picture that a strictly colorblind analysis might miss, she said. “When the law tries to redress an action that comes from a certain stereotype, it’s difficult,” she explained.