Maine's Angus King still doesn't want to caucus with anyone 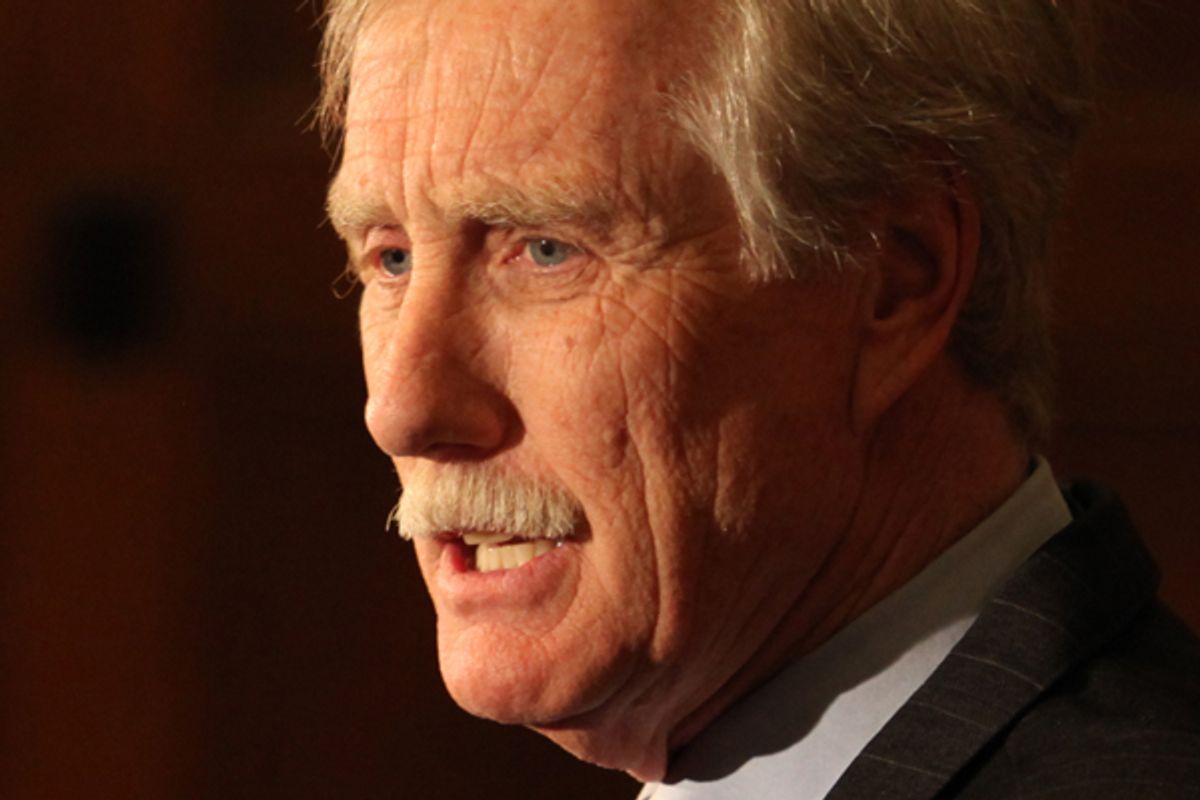 Angus King, the independent candidate for Olympia Snowe's soon-to-be vacated U.S. Senate seat, is not backing off his pledge to not caucus with anyone should Mainers decide to send him to the world's most deliberative body. Here (again via David Nir) is a laudatory editorial from Seacoast Online praising King's independence:

However the election shakes out this fall, it's clear that the majority margin will be razor thin. Into this situation, any party candidate, no matter how reasonable, automatically comes with baggage. "We could send down a combination of Pericles and Thomas Jefferson, and if that person's reporting to (Senate Majority Leader) Harry Reid or (Senate Minority Leader) Mitch McConnell, he's going to be ineffective. Every vote is a test vote. Every vote is party loyalty. We're sunk if it keeps up this way," King said.

He believes, if he heads to Washington truly as an independent and beholden to no one, he may have a chance to break the logjam. Certainly, if five or six senators like him were elected to Washington — which could just happen in 2014 if politicians around the country see that King has been effective — it could end the damaging political impasse.

Once more: "Caucusing" with a party in the Senate does not mean "always voting in lockstep with." Caucusing with the Democrats does not force you take take marching orders from Harry Reid, as anyone who has paid attention to the news over the last five years or so should know by now. But not caucusing with anyone means you don't get any committee assignments, or any say over legislative priorities.

The Senate is a two-party body and operating entirely outside the party system means giving up most of the power associated with being a senator. This is not because of "partisanship" but because of the nature of the institution. And if the party split is 50/50, the way some "fierce independent" like King would leverage his power would be to make a deal to get some plum committee assignments in exchange for caucusing with one of the parties. That would be very good politics for that guy, and it would also illustrate how "moderates" already have a great deal of power in the essentially undemocratic Senate.

If this is King's plan, and his "I don't understand what it means to caucus" talk is just designed to get the parties to start wooing him, then he'll fit in just fine. But the way to end the logjam in the Senate would actually be to just force it to adhere to regular majority rule like the House (or to abolish it altogether -- I am keeping the dream alive!). Five random non-caucusing independents would just be five more senators with the ability to halt all Senate business but no ability to actually accomplish things.

Also, "independence" is not an inherent virtue and party affiliation is a useful method by which voters, who are not and should not have to be political experts, determine what a candidate stands for, and "partisanship" is a really facile and inadequate explanation for what is wrong with American politics.