An overnight NYPD raid emptied the park that was becoming the movement's new hub. 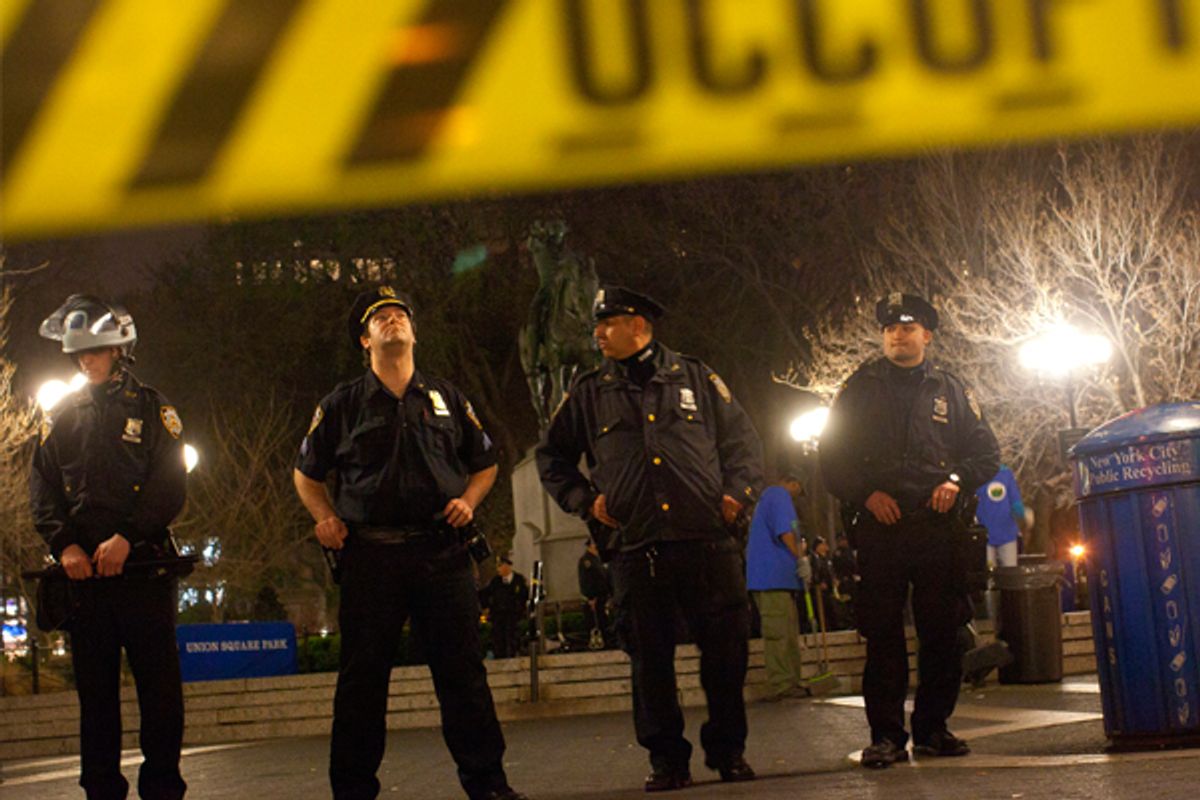 The game of cat and mouse between the NYPD and Occupy supporters over New York space continues. Early Wednesday morning, police ousted around 300 people from the Southern end of Union Square Park, where an occupation had been gathering numbers since the weekend after Occupy Wall Street was once again evicted from Zuccotti Park in Downtown Manhattan in an aggressive police sweep.

Since Saturday night, the impromptu Union Square occupation swelled from 70 people to around 300 on Tuesday night. In line with park rules, no tents had been set up, with only blankets used for comfort during the past few mild, early-spring evenings. Police only interfered with the occupation as the numbers grew. Just after midnight, they forced the crowd onto the sidewalk on 14th Street.

The standoff between police and protesters was briefly interrupted, according to firsthand accounts on Twitter, when a woman in the crowd went into labor and had to be taken to an ambulance. And according to Occupy Wall Street's liveblog, the scene turned ugly at around 4.00am on Wednesday: "Police rush the crowd, shoving and attacking people. Livestream briefly down, back up now. At least one person reported badly injured, now unconscious, after being grabbed and thrown to the ground by cops. Medics on the scene," the blog noted. A reported six people were arrested over the course of the night. There has been no further news to date on the condition of the woman reportedly knocked unconscious.

The ousting from Union Square came as a surprise to many. The Gothamist notes that although Union Square Park officially closes between one and six a.m., "this curfew has almost never been implemented." Beyond this, the atmosphere in the park had been relaxed and festive since the weekend, with Occupy supporters and their multiple signs and banners happily coexisting with the street performers, skaters and passersby who usually inhabit the concrete space outside Union Square station. The area was fast replacing Zuccotti Park as the assumed staging ground for Occupy Wall Street actions.

As dawn broke on Wednesday morning, and cops gradually peeled away from Union Square, some people edged back into the park from the sidewalk to lie down. Despite police action, Occupy Wall Street is not finished with the park: on Wednesday evening at 6 p.m. the "One million hoodie March for Trayvon Martin" will leave from Union Square. Marchers (albeit likely far fewer than 1,000,000) have been asked to turn up in hooded sweatshirts to highlight issues of racial profiling which underpin the recent murder of 17-year-old Martin in Florida by a security guard.

Whether another standoff with police is in the cards is yet to be seen -- the game of cat and mouse (or "pig and mouse" as those harboring anti-NYPD sentiment are calling it) will no doubt continue as Occupy actions in New York are once again a daily occurrence.