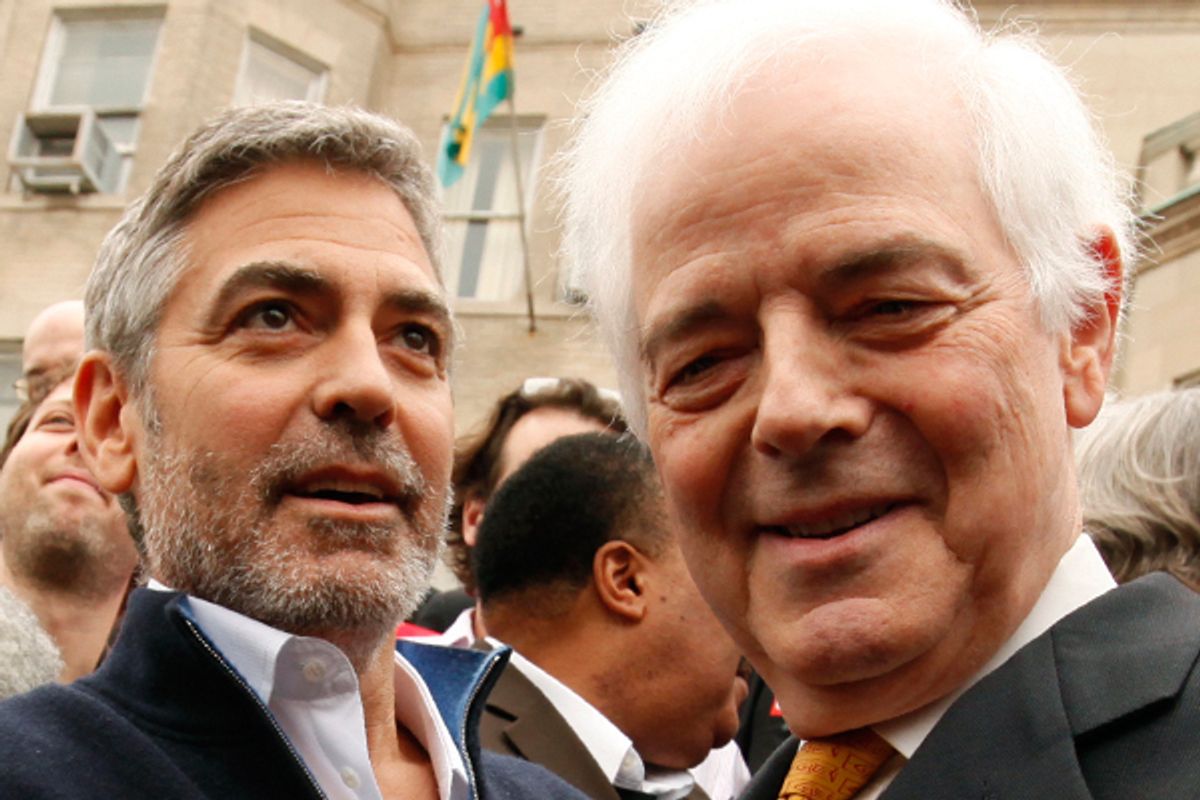 George and Nick Clooney on the steps of the Sudan Embassy in Washington, D.C., on March 16. (Reuters/Kevin Lamarque)
--

When George Clooney was arrested on Friday while protesting outside the Sudanese embassy in Washington, he was not alone. "I'm glad to be standing here with my father," he told reporters as he and his dad, former news anchor and television host Nick Clooney, were led away. Later, Clooney told Fox News Sunday that "I grew up in a family that believed your job was to be involved with your fellow man. You have a responsibility to participate in the human condition." It was an example instilled in no small part by a father who he says was a "big believer in the importance of information."

That strategy seems to have worked out pretty well for the guy. That's why many of us currently raising our children in a culture full of forces trying to shield them from storybooks and the facts of life saw the Clooney family story as an inspiration, the epitome of bonding and parenting done right. And it made us go straight to the source and ask for some child-rearing insight from the man who gave us George Clooney -- Nick Clooney himself. After genially joking about his "terrible ordeal" in jail over the weekend, and before taking his dog out for a morning walk, the veteran journalist spoke to Salon Wednesday on raising children who want to change the world.

What can we as parents do now so that someday, we might get to know what it feels like to ride in the back of a police van with our Oscar-winning, beloved humanitarian offspring?

In a lot of ways, it simply happens. Both of my children [Clooney also has a daughter, Ada] are extraordinary people, and a lot of that is just within them. Most of it is George himself. He tries to and does give credit to us for what we've done, but if he'd turned to be a serial killer I wouldn't have been riding in the back of that paddy wagon with him.

How did you talk to your children when they were growing up?

You throw out 58 homilies and you hope that one or two of them stick. And then our children would occasionally surprise us by spitting them back at us.

Based on the events of last weekend, that still happens.

As a newsman, what do you say to people who feel children need to be protected from the upsetting events in the world?

Perhaps we were negligent in protecting our children. We instead always opted for involvement. We always believed that was the best thing for us to do and for them to do. We believed that if someone is down on the ground, we should not be standing there and doing nothing. That has always mattered to us, and that always mattered to my grandmother and grandfather who raised me. And I hope that I'm passing it on to my children.