The strange case of the Toulouse shooter

As facts emerge about the Muslim extremist who allegedly attacked a Jewish school in Toulouse, more questions arise 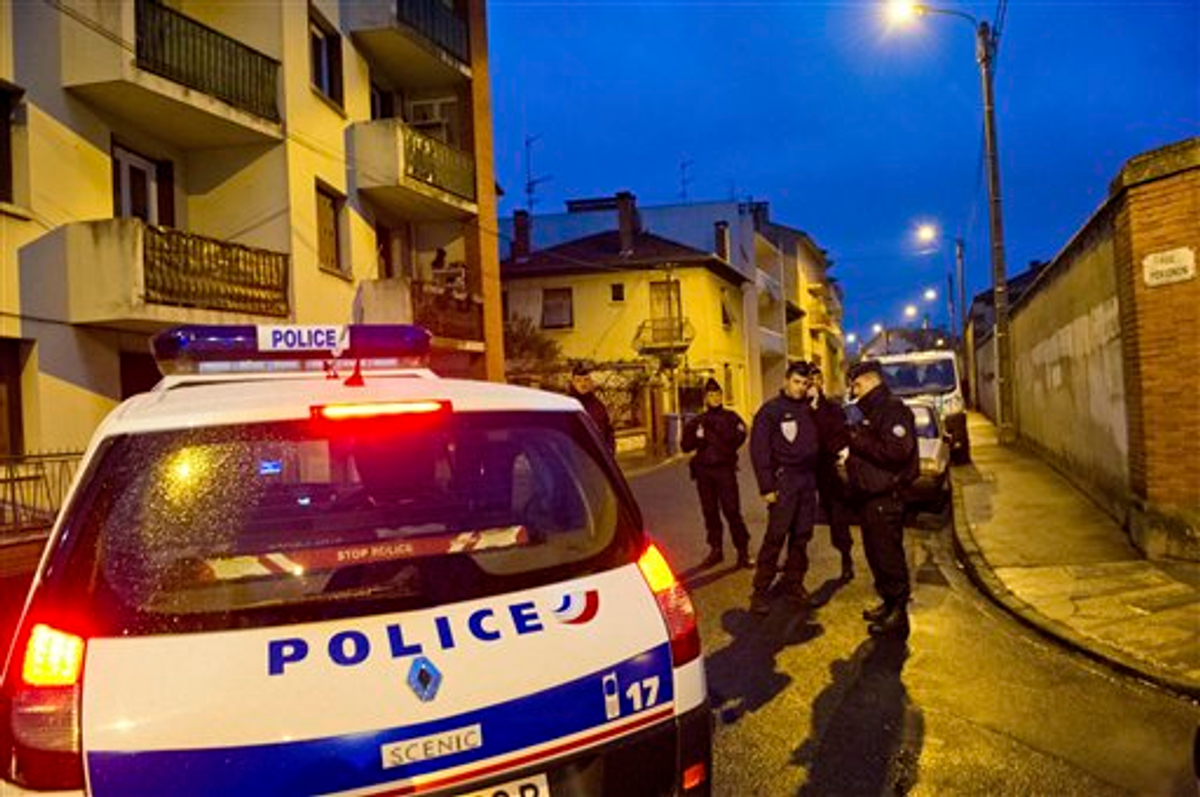 French police secure the area where they exchanged fire with a gunman who claims connections to al-Qaida and is suspected of killing three Jewish schoolchildren, a rabbi and three paratroopers, Wednesday, March 21, 2012 in Toulouse, southwestern France (AP Photo/Bruno Martin)
--

The suspect is cornered. As I write this it seems only a matter of time before he either gives himself up or ends things in a suicide by cop action.

But it is clear that this event is, in the words of French political commentator Agnes Poirier, "France's 7/7." July 7th, 2005 was the day jihadi suicide bombers killed more than 50 people in London.

The body count in France is thankfully smaller but the reason Poirier makes the 7/7 analogy is that the killer is home grown. He is not someone sent from abroad to carry out a mission, but rather a French citizen, radicalized on French soil. A cursory reading of the French press shows another similarity. Although the victims were from minority groups this is a tragedy for the entire French nation.

The Guardian's Angelique Chrisafis is in Toulouse and put together a quick biographic dispatch on Mohammed Merah for the paper's live blog on the event (scroll down to 1:20 p.m.):

"On the streets near the apartment block under siege, several young men gathered who claimed they knew the suspect from Les Izards, a mixed neighborhood of Toulouse where he had grown up. A 25-year-old French man, whose parents were born in Algeria, said: "I grew up with him. I'm totally shocked and surprised, I can't believe that he could do this. His mum was French of Algerian origin — she brought him up alone. He didn't have a dad. This has absolutely nothing to do with Islam, or with us, and I really hope that all the young people of our type of neighborhood won't be sullied by this. It has always been hard enough living in France with prejudice but now it's going to be much worse."

Even as the facts about Mohammed Merah emerge, more questions arise. Police say they were following him for several years. How did they miss out on at least following him after the first shooting … and if not the first, why not after the second?

Or did it take the attack on a Jewish school to make them think this was a Muslim extremist at work?

Was there any truth to the allegation yesterday that the killer was seen wearing a camera on his chest like Norwegian neo-Nazi Anders Breivik and filming the killings at the Jewish school? Or was this something the police and Interior Minister Claude Gueant put out so that Merah thought they were looking for a neo_Nazi and not him?

But a national tragedy like this gives a president a chance to act presidential.  Sarkozy has certainly been doing that. He has convened meetings of the leaders of France's religious communities. During the course of today he has been at the police station in Toulouse where the operation to bring the killer in has been headquartered. He has attended the funerals of the paratroopers murder by Merah last week and continues to make all the right sounds about not allowing these events to threaten the social integrity of France.

French magazine Le Nouvel Observateur also notes that Sarkozy is rated higher than Hollande, on the issue of national security. It's likely that security will become a major issue now in the campaign.