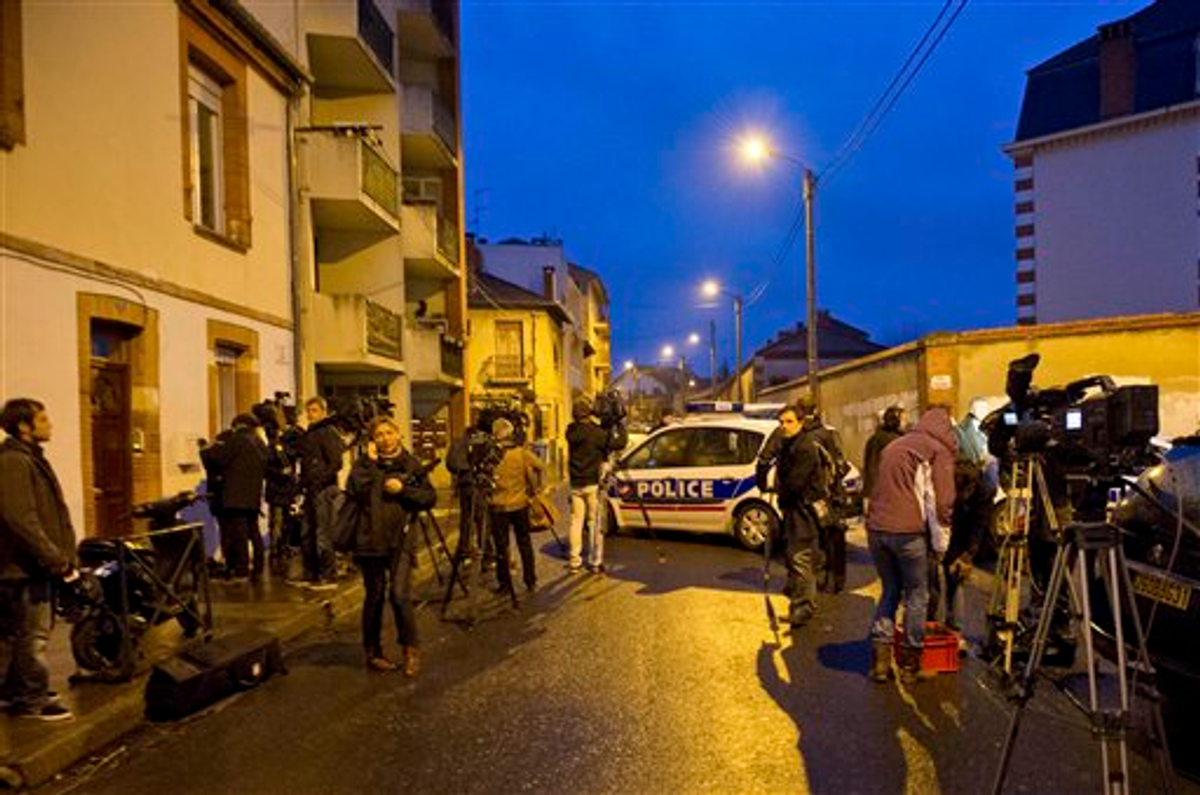 ournalists gather near by as French police secure the area where they exchanged fire and were negotiating with a gunman who claims connections to al-Qaida and is suspected of killing three Jewish schoolchildren, a rabbi and three paratroopers, Wednesday, March 21, 2012 in Toulouse, southwestern France (AP Photo/Bruno Martin)
--

PARIS, France – French police have surrounded an apartment block in Toulouse where a man suspected of shooting dead seven people, including four at a nearby Jewish school, is barricaded on the fourth floor.

The man has been identified as 24-year-old Mohammed Merah, a French citizen of Algerian origin – who told police he was an "mujahedeen" and a member of al-Qaida, France Info radio reported.

Police have taken control of the top floors of the building, in Toulouse's northern Côte Pavée neighborhood, with residents evacuated via the roof and into waiting buses.

Interior Minister Claude Gueant, who is at the scene, told the French news channel BFM TV that in exchange for a "walkie-talkie," Merah threw a .45 mm gun from his window.

This is understood to be the same weapon used to murder four people at the private Ozar Hatorah school on Monday, and three French paratroopers in Toulouse and Montabaun a week earlier.

Merah is still reportedly armed with a Kalashnikov, a mini-Uzi 9 mm machine pistol and several other handguns. Gueant told BFM his motive had been to "avenge Palestinian children and attack the French army."

Authorities have confirmed French intelligence has been monitoring Merah for some time, and that he had previously been arrested in Kandahar, Afghanistan, for "common law crimes."

It is understood that three of Merah's family members, including his mother and two brothers, have been taken into police custody.

Gueant told BFM that Merah indicated to French counter-terrorism forces that he would surrender in the afternoon. "We cannot be sure he will surrender, but we are confident the suspect is the man who carried out the killings in Montauban and Toulouse," Gueant said.

Three officers from the elite police team known as RAID were hurt in this morning's operation, which began at 3 a.m. local time, France Info reported, adding that one of the officers was shot in the knee.

French authorities say Merah trained in the Pakistan-Afghanistan border region and was affiliated with Forsane Alizza, or Knights of Pride, an Islamic group dismantled by the French government.

In an address to the nation, French President Nicolas Sarkozy praised French police for their "speedy investigation," and urged unity between France's Muslim and Jewish communities.

Sarkozy is to attend a memorial service this afternoon in Montauban, where two soldiers were killed and a third wounded by a gunman on a motorcycle on March 15.

According to reports, a man wearing a motorcycle helmet and driving a motor scooter pulled up in front of the school and shot a teacher and three children — two of them his own young sons.

They also raised the terror alert in the Midi-Pyrénées region to its highest ever as a result of the attacks were linked to similar attacks on French soldiers a week earlier.

The shootings have prompted an outpouring of emotion throughout the country and angered the Jewish community which claims the attacks are racially motivated.