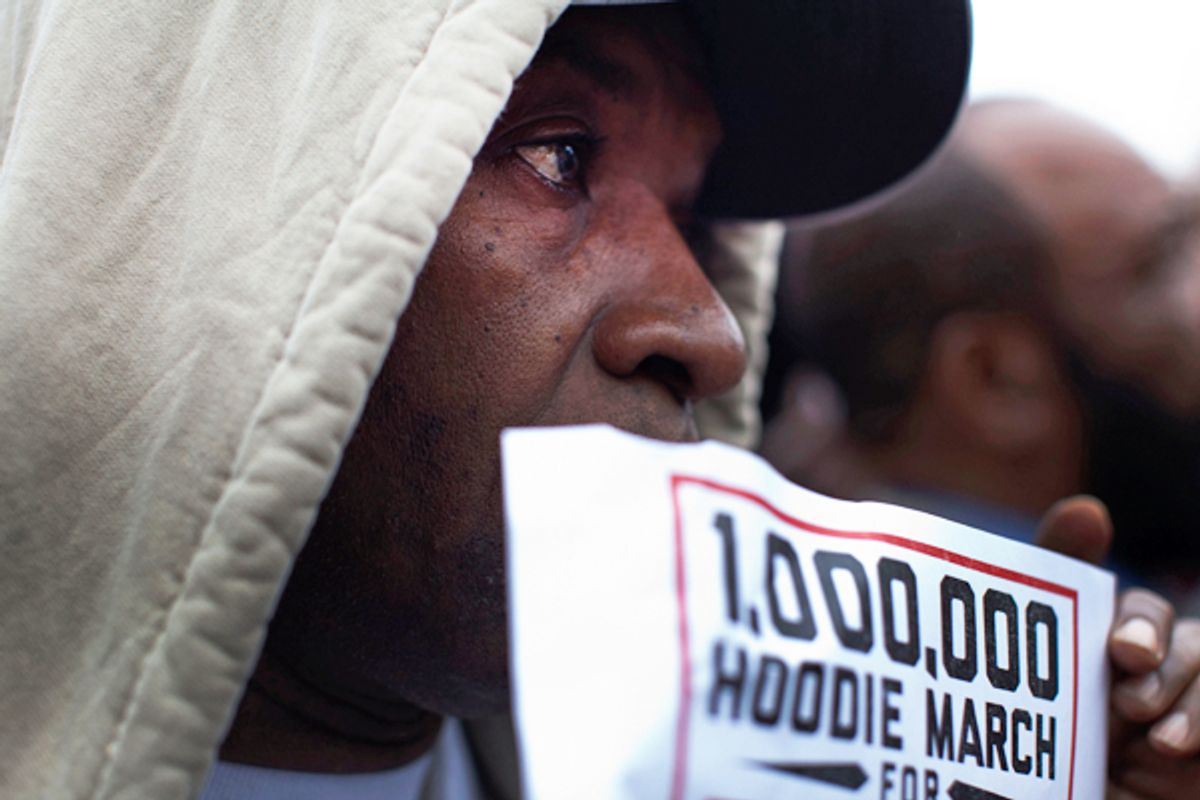 On Wednesday night, around 5,000 people took to the streets of New York to demand justice for Trayvon Martin, the 17-year-old African-American who was killed by a neighborhood watchman, George Zimmerman, last month. Martin was armed only with a pack of Skittles when Zimmerman shot him, claiming the boy looked "suspicious." Martin’s crime -- the same one committed by Amadou Diallo, Sean Bell, Ramarley Graham and others -- appears to have been walking while black. Zimmerman has not been charged in the killing, despite a national outcry.

Organizers of the "Million hoodie march" for Trayvon Martin asked protesters to converge at Manhattan's Union Square on Wednesday evening wearing hooded sweatshirts, to symbolically highlight the profiling used against non-white youths in hoodies. The plaza, from which Occupy supporters were evicted by police the night before, was once again full of Occupy participants and hundreds of others galvanized by the Trayvon Martin case. Many young, black marchers donned hoodies and held signs reading, "Am I next?"

Martin's parents spoke to the crowd at Union Square before the march took off. "This is not a black and white thing. This is a right and wrong thing," Sybrina Fulton, Martin's mother, said to the rally. “Our son is your son."

Following speeches from the Martins, council member Jumanee Williams and the Martins' attorney, the masses poured onto 14th Street, occupying both lanes of traffic and defying attempts by the NYPD to corral marchers onto the sidewalk. As the march took over Sixth Avenue, a roar went up of "I am Trayvon Martin." Calls of "Justice for Trayvon Martin!" mixed with chants of "No justice, no peace, fuck the police!"

After snaking back to Union Square, the march split into different groups. One group marched downtown along Broadway, while another section charged up Sixth Avenue and rallied at Times Square. At one point, a downtown contingent advanced on the iconic Wall Street bull sculpture at Bowling Green Park. Protesters pulled down the barricades, which had been guarding the statue since Occupy Wall Street's inception last September, and one man stood atop the bull's back.

Meanwhile, in midtown, police flanked the march returning to Union Square from Times Square, aggressively pushing marchers onto cramped sidewalks. "Do not let the cops dictate our actions. Do not be afraid!" one man shouted. At just after 10 p.m., both marches reconvened at Union Square -- Occupy's new Manhattan base, hotly contested by New York's finest. When police moved in to close the park at midnight, officers outnumbered the 300 or so protesters by at least 100.

It might at first seem confusing that a solidarity march over justice for a murdered Florida teen would involve mass support from Occupy Wall Street. But those who still see Occupy as limited to contesting corporate greed and the influence of money in politics have fallen behind the movement. Occupy actions take aim at all oppressive, hierarchical systems -- capitalism and racism (and their interplay) among them. Indeed, a popular printed-out sign held by many on Wednesday's march read, "You can't have capitalism without racism."

And although the action Wednesday was driven by anger at the injustice suffered by Trayvon Martin, it was not only a desire to see his killer charged (although this is certainly demanded) that brought people to the streets. The protesters were challenging not just the murder, but a system wherein such killings happen in the first place.