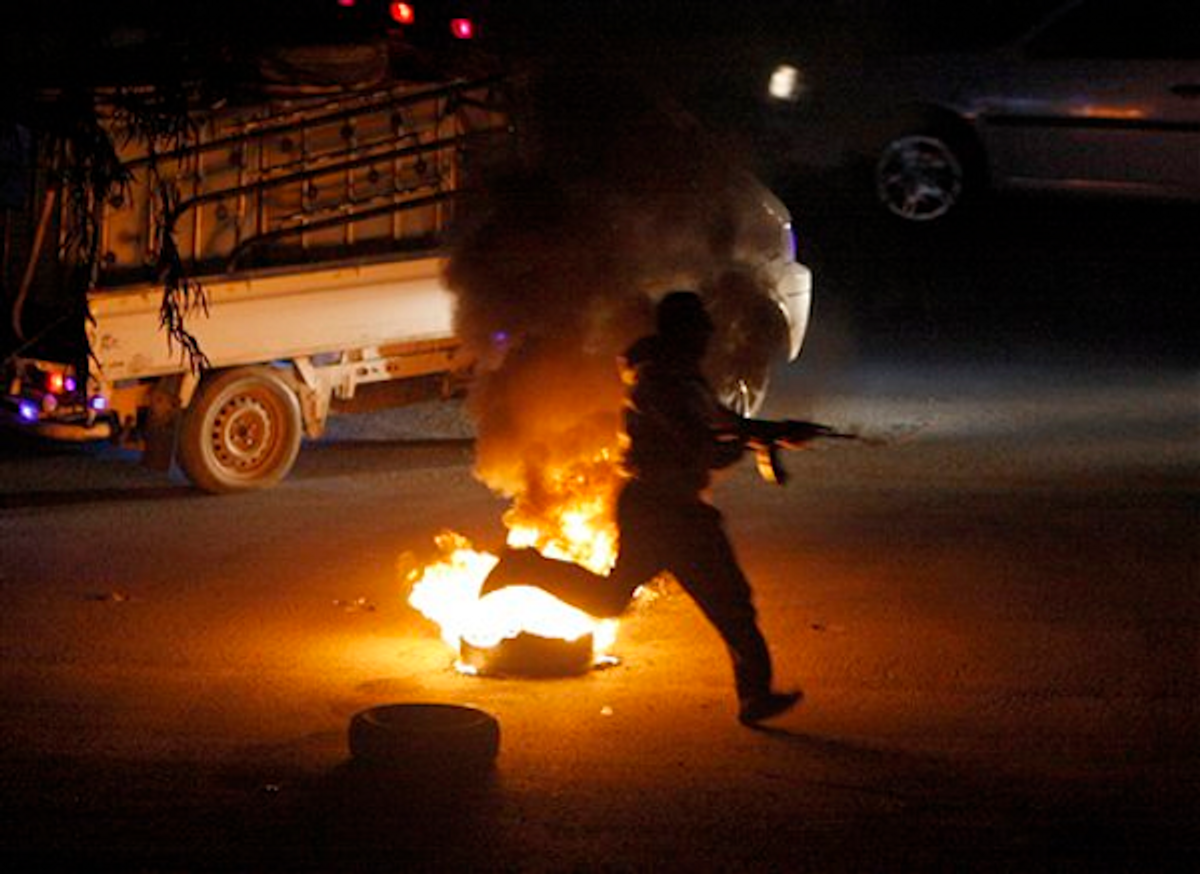 A Syrian rebel runs with his AK-47 towards a Syrian army checkpoint in a suburb of Damascus, Syria, on Saturday March 17, 2012 (AP)
--

This article originally appeared on GlobalPost. It was reported by a journalist in Damascus whose name has been kept secret for security reasons.

DAMASCUS, Syria — Rebel fighters landed their most serious blow yet against the Syrian regime’s security apparatus, even as dramatic but conflicting accounts emerged of what triggered an intense overnight firefight in a heavily protected neighborhood of Damascus earlier this week.

Both the regime and the rebel Free Syrian Army (FSA) claimed as a victory the battle that eyewitnesses said began around 11 p.m. and lasted into the early hours Monday morning. The battle involved heavy machine gunfire, rocket-propelled grenades and helicopters, the witnesses said.

State-run Syria TV and Al Dunya reported that security forces attacked a “terrorist cell” living in a flat in the western Mezze district of the capital, where foreign embassies and official residences are located. It is also home to many senior figures from the ruling Baath Party, the military and security apparatus.

With armed guards on each door, security cameras and gates, Mezze is the capital’s most-secured neighborhood. Activists said Assef Shawkat, President Bashar al-Assad’s brother-in-law, a former military intelligence chief and now deputy head of the armed forces, has a home in Mezze Villas West, the scene of the fighting.

Ali Mamluk, head of State Security is said to have two houses on the same street.

Just 500 meters up the road is Mezze 86, a military housing compound home to officers and families from the army and security services, most of them Allawites, the minority sect that dominates Syria’s ruling elites.

“On this street there are dozens of the country’s senior officials and officers. They come and go in big cars with blacked out windows,” Mohammed, a 30-year-old living on the street where the fighting took place, told GlobalPost.

But for residents trying to sleep on Monday morning, the usually secure neighborhood felt more like a war zone.

“I heard shooting and looked out of the window to see large numbers of security men with Kalashnikovs and machine guns deployed around every building in the street and even on the rooftops,” Mohammed said “At about midnight there was the sound of two big bombs. We live in the most secured area of Damascus. This is the first time in my life I saw shooting.”

Official media reported three “terrorists” had been killed on an attack that left a flat burned out and pockmarked with bullet holes, while an officer and plain-clothes security member were killed.

Speaking to Bloomberg, an FSA officer claiming to oversee the Damascus area for the rebels, said the fighting killed 50 people, 25 from each side, and had been triggered when the FSA attempted to escort a high-ranking defector from the nearby Political Security headquarters.

Maj. Maher Nuaimi said the fighting had centered on the political security building, not the flat broadcast on state-run TV, and had drawn in dozens of night guards who "didn't even know who was fighting who." Nuaimi claimed the defection was a success but declined to name the official.

A second eyewitness who spoke to GlobalPost said residents believed an FSA unit was indeed attempting to extract a high-ranking defector, and regime security forces had tracked them to a flat and destroyed it, killing all inside.

Syriandays, a Syrian website close to the regime, reported “an attempt to kidnap a senior officer but security forces foiled the plot.” But it did not name the officer.

A defected former member of Syrian intelligence with contacts to an FSA unit in Damascus, meanwhile, told GlobalPost the attack had in fact been an assassination attempt against Shawkat, Assad’s brother-in-law.

“There were 10 guys from an FSA unit who attacked Shawkat’s home with Kalashnikovs,” he said. “The regime sent a helicopter to light up the street so there was nowhere for the FSA guys to hide or to escape in their car. They ran to a flat used by the FSA which was destroyed with RPGs. All 10 died.”

Foreign media are banned from reporting independently in Syria and the account of the attempted assassination was impossible to verify.

Whatever the trigger for the firefight, a Damascus-based political analyst said the fact that such street fighting had come to the Syrian capital represented a serious threat to the regime’s grip on power.

“The Mezze attack opened the eyes for people in the capital about the regime’s control on the ground. This was a big escalation,” he said.

“If defected soldiers and officers can carry out such a big attack in the heart of Damascus this means they can hurt the Assad regime, even though it began to control much of Homs, Daraa , Hama, Idlib and Aleppo’s countryside. If the regime loses control of Damascus then the regime’s days are numbered.”