"Mad Men" has a tiny audience, and yet our culture is obsessed -- because it makes us feel both smart and stylish 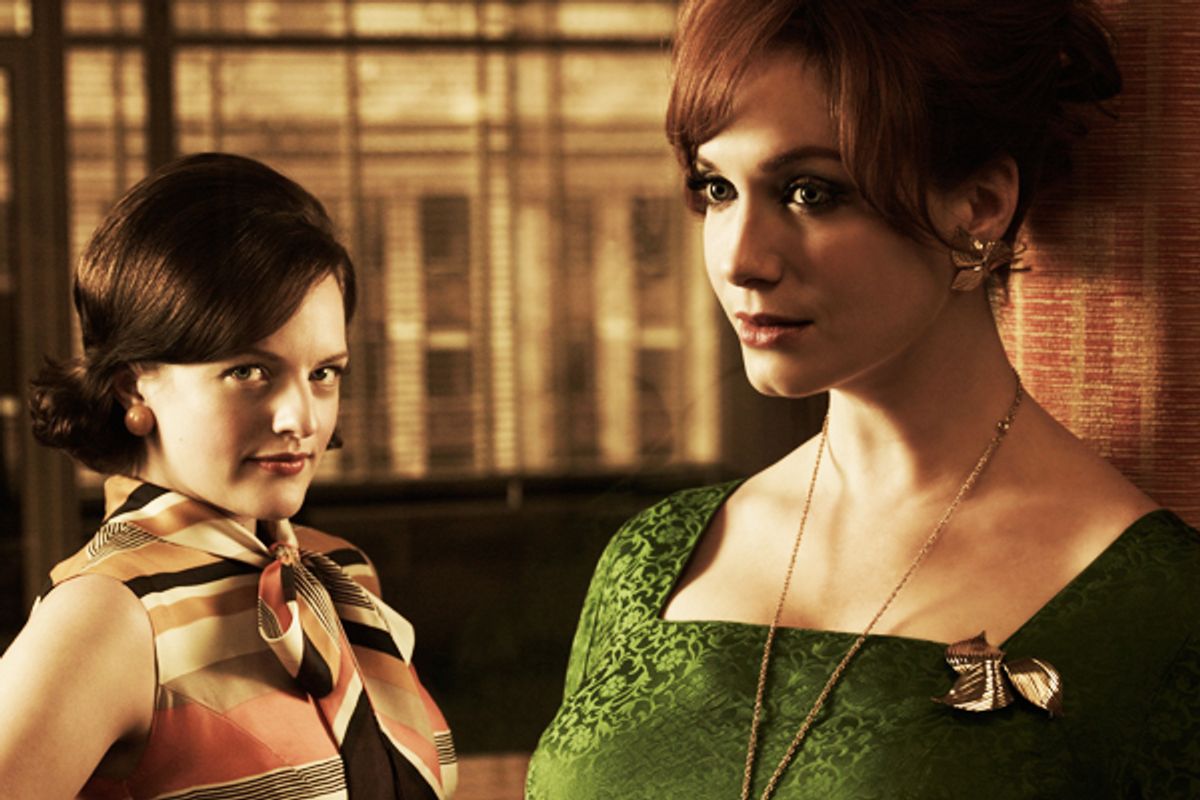 There is a mystery to AMC’s “Mad Men,” which returns for its fifth season on Sunday night. This mystery has nothing to do with the year the forthcoming season is set, Don Draper and his fiancé Megan’s relationship, or the litany of other mini-spoilers a Matt Weiner-driven Omerta has forced journalists to hush up about. It is as follows: Why has “Mad Men,” a show watched by less than 3 million people in which oblique conversations over tumblers of whiskey count as major plot developments, been the "it show" of the last five years?

“Mad Men’s” greatness — and it is great — is not enough to explain its cultural ubiquity.  “Breaking Bad” attracts both as many viewers and critical hosannas as “Mad Men,” but it has not secured the covers of Rolling Stone, Newsweek, and Entertainment Weekly. Other zeitgeist-inhabiting shows — from “Twin Peaks” and “Survivor” to “Lost” and “The Sopranos” —  have had tens of millions more viewers, and even recent flavor of the month “Downton Abbey” attracted 5 million.

“Mad Men’s” basic cable-existence isn’t to blame: 9 million people watched AMC ‘s “The Walking Dead" finale, while HBO’s premium cable “Mad Men” knock-off “Boardwalk Empire” has an audience of over 3 million. And yet it is “Mad Men" that we conspicuously consume, that has become the ultimate cultural luxury good, birthing a clothing line at Banana Republic and a set of nail polish colors, inspiring limited edition Barbies, altering the silhouettes of fashion seasons, making its leading man into a movie star, amassing innumerable inches in newspaper columns, inciting untold investigations into the historical record, and spawning endless editorials and think pieces. “Mad Men’s” influence so exceeds its audience because, while it is a fantastic show, it’s an even better product.

There has been an almost Talmudic level of scholarship about the rich text that is "Mad Men," and explanations of its appeal are myriad. Daniel Mendelsohn, in his takedown of the show for the New York Review of Books postulated that the allure was largely smugness — the opportunity to look back at how crass and bigoted people were way back when, and feel superior about how much more enlightened we’ve become. “Mad Men’s” creator, Matt Weiner’s believes the show’s draw is the opposite, that its pleasures are those of identification — “You’re supposed to get a sense of companionship,”  he says, as you see that the characters are grappling with still relevant predicaments. In a recent piece in New York Magazine, Matt Zoller Seitz argued that the show’s true subject is the "mystery of personality,” and that “its characters are more true to life than any others on TV because they’re so random, inscrutable, and mysterious."

And like all TV — which we are always watching a little bit for fun — “Mad Men” is escapist, harkening back to a time when you could drink all day, leave your garbage on the grass, ignore your children, and, yes, even be casually racist, misogynist, and homophobic with no consequences. The litany of explanations for why “Mad Men” works doesn’t stop there. And the fact that “Mad Men” is so deep, that it stands up to this sort of scrutiny and inspires multiple interpretations, that it can be discussed at length on blogs, Twitter, Facebook, and in living rooms, is perhaps the biggest reason for the devotion to it: Like all great art, “Mad Men” contains multitudes.

But "Mad Men's" reach extends beyond the audience who loves it. You don't have to watch the show to appreciate it. You don't have to watch it to see that it looks great, as luxurious and finely crafted as all the mid-century modern furniture filling out the offices at Sterling Cooper. From its first episode, “Mad Men” flaunted a mature, sumptuous aesthetic different from anything else on the air. Handsome adults, forbidden from going to the gym and giving themselves a more modern musculature, strolled around perfectly claustrophobic offices, all sticky khaki greens and oppressively low ceilings. They wore perfectly tailored suits and dresses in flattering cuts just waiting to be revived. (If “Mad Men” had been set in the '80s, could it have jump-started a craze for shoulder pads? A legion of “Working Girl” fans will never know.) “Breaking Bad's" Walter White and his tighty whities would never look at home in the pages of a fashion magazine, but Don and Betty Draper could have walked right out of one.

But if looks were all that mattered, the ludicrous “Playboy Club” would still be on TV. Again, even people who don’t watch “Mad Men” can see that in addition to aesthetics, it's got the kind of substance that brand it as the thinking person's TV show, even if said thinking person has never actually seen an episode. You don’t have to watch "Mad Men" to know it's about major world historical events, wrapped up in dramaturgical style dripping with ambition, and backed up by the vociferous praise of tastemakers, fashionistas, and awards-giving organizations. “Mad Men”  is a genuinely smart television show, one that makes the people who watch it feel smart — it doesn’t pander, it embraces ambiguity, and it demands the audience piece events and motivations together on their own — but, like the most enticing brands, it also appears smart.

Even the most common complaint about "Mad Men"— that it’s boring— is a sort of back-handed compliment about its gravitas. Yes, the plot moves slowly (this is a show in which a long, late-night conversation between Peggy and Don is the equivalent of an action sequence), but in a moment when we are so anxious about the ever quickening pace of the world, and media in particular, “slowness” as an insult has just about been re-appropriated. (As in, "Mad Men" is a part of the slow TV movement.) It’s the most respectable of slams, a term nearly synonymous with serious.

Because of “Mad Men’s” position in the TV firmament — a regular contender for greatest drama of all time and the source of dozens of copycats — questioning its status as a cultural juggernaut may sound niggling: it deserves all the attention, and that should be enough. But “Mad Men” is a show all about the hard sell, how we promote and package not just things, but ourselves, not just to clients, but to ourselves. “Mad Men’s” packaging matters: it looks great and it seems like it's good for you. One doesn't need to be Don Draper to be able to sell the hell out of that.

In the poster for this upcoming season, Don stares at a department store window where a male mannequin in a robe gazes at a naked female mannequin, her nightgown on the floor at her feet, in what looks like some sort of sexy, slightly-threatening domestic tableau. Don's reflection — not just his fantasy — stares back at him. Don is not the sated, commanding husband with the fine young woman in this window display, even if that’s what he longs to be.  And we're not a nation of “Mad Men” viewers either, even if when we look at our own window display, that is exactly who we would like to see.