Pick of the week: A dazzling martial-arts sensation

Pick of the week: Claustrophobic and intense, "The Raid" is a no-holds-barred instant action classic 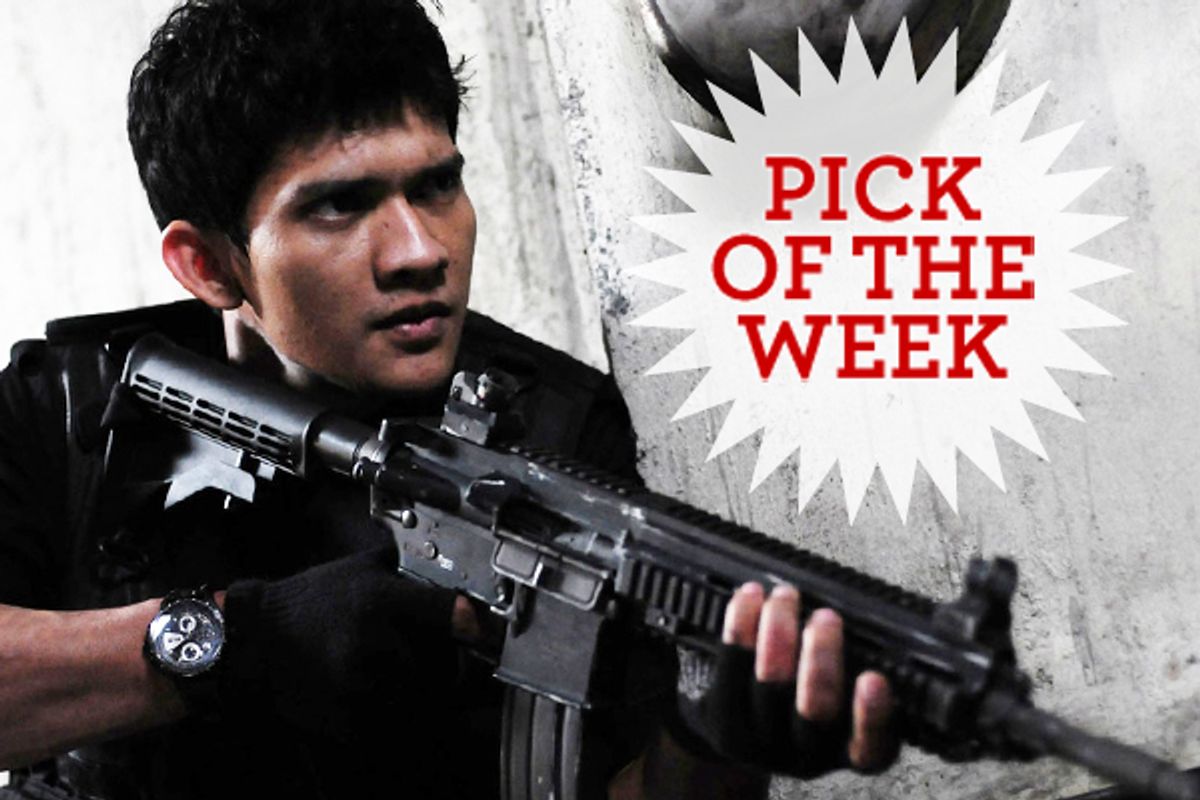 Iko Uwais in "The Raid: Redemption"
--

It probably isn't helpful for me to tell you that Gareth Evans' slam-bang Indonesian action flick "The Raid: Redemption" feels like a video game, because that's likely to inspire only two kinds of reactions. Either you'll roll your eyes and walk away in sadness and outrage at what our culture has become, or you'll sniff that no, it isn't anything like a video game, because it doesn't have multiple pathways and the viewer can't control the outcome or destination. Listen, just watch the doggone movie. "The Raid" is a witty, pulse-pounding instant midnight classic, an immediate sensation at the Sundance and Toronto festivals that should appeal to cinema buffs, action freaks and a pretty large mainstream audience besides. It offers some of the best Asian martial-arts choreography of recent years and an electric, claustrophobic puzzle-palace atmosphere that'll leave you wrung out and buzzed.

Evans is a Welsh-born filmmaker who became obsessed with Indonesian culture generally, and then with the intricate martial-arts style (or collection of styles, I guess) called Silat, which is practiced throughout Southeast Asia but is especially popular in Indonesia and Malaysia. There's an extensive tradition of cheaply made Silat-based action movies from those countries, which have rarely or never reached the West. Evans has obviously seen plenty of them, and decided to infuse the genre with higher production values and Western film-school technique. Even more important, he has replaced the outrageously fake fight choreography seen in many Southeast Asian films with elegant, visceral and utterly convincing combat scenes. His stars and fight choreographers, Iko Uwais and Yayan Ruhian, are leading practitioners of the Indonesian style called Pencak Silat. (Check out this outrageous amateur video of those two performing live onstage at the Doha Tribeca Film Festival.)

Evans' first film with Uwais and Ruhian, the 2009 "Merantau," was a hit in Asia and has a following among martial-arts buffs, but "The Raid" is something else again. It's essentially an extended pitched battle inside a grimy, gloomy apartment tower, where you can almost smell the boiled laundry, fear and Indonesian cookery, and where a heavily armed police SWAT team has been lured into an ambush by the crazed shock troops of an ultra-scary drug lord. It's tense, relentless and masterfully paced, showcasing some of the most adrenalized fight scenes I've ever encountered. As I've suggested, "The Raid" bears a relationship to the first-person shooter game genre; for most of the film, Evans sticks close to Rama (Uwais), a handsome, likable family man, and one of the few cops on the SWAT team who definitely isn't corrupt or incompetent. Locked into the building's middle floors with thugs below and above them, Rama and his dwindling band of cops must fight both vertically and horizontally, going through doors, floors and walls, by subtlety or by force, taking on dozens of assailants armed with guns, knives, fists, sticks, machetes, furniture and random household implements.

No doubt Evans has been to school on the classic Hong Kong action movies of the '80s and '90s, and is also steeped in a venerable American drive-in aesthetic: Imagine if John Woo had directed "Escape From New York," and Kurt Russell's Snake Plissken wasn't just a badass but a finely honed Indonesian fighting machine. (I'm not saying there's anything wrong with "Escape From New York" the way it is, mind you.) It's important to note, however, that there's not the slightest iota of snarky, jokey, postmodern pastiche in "The Raid." It never feels like a tongue-in-cheek, Tarantino-style East-West hybrid; the dialogue is entirely in Indonesian (not that there's much of it), and if you didn't know the director was British, you'd never guess that from internal evidence.

As in many Asian action films, low-budget or otherwise, character and plot are kept to minimal basics. All we ever learn about Rama is that he has a young, pregnant wife and isn't a crook, and that he and his team of fellow cops are undertaking a dubious mission to take down a notorious crime czar called Tama (Ray Sahetapy) and his entire operation. Furthermore, Evans' script employs an archetypal, almost fairy tale structure, and an obsession with honor and ethics (even, or especially, in a situation where they don't seem to apply), both of which are familiar elements of Asian crime cinema.

There are those who fight honorably on both sides, and those who don't. Tama is a zero-integrity slimeball from the moment we meet him, but at least one member of Rama's SWAT team turns out to be just as bad. As Rama battles his way through any number of deranged opponents with machetes, knives or guns, one fearsome opponent awaits: the ponytailed, sad-eyed Mad Dog (Ruhian), who willingly gives up chances to shoot his enemies because a real man kills with his hands, in a fair fight. Of course there's still a powerful element of fantasy to the final showdown between Rama and Mad Dog, but compared to almost all fight scenes in martial-arts movies, it feels bone-crunchingly authentic, driven by dazzling footwork, exemplary cinematography (by Matt Flannery) and the real weight of real bodies.

Evans has said in interviews that in real life Uwais and Ruhian are two of the gentlest and most polite guys you'd ever want to meet -- and why wouldn't they be? It's not like anybody in Indonesia is likely to try messing with them. For any viewer, the question of whether something like "The Raid" was worth making, or is worth watching, is always going to be subjective. It's a proud, even celebratory genre movie, and while I'm sure Indonesian viewers can detect a level of social commentary, that isn't really the point. Dramatically, it's definitely limited -- Evans, Uwais and Ruhian aren't doing "The Cherry Orchard," but they aren't trying to. They're spinning a thrilling yarn of ultra-macho, hand-to-hand combat with humanity, spirit and even a kind of nobility. I don't want to watch this movie every day for a year or anything, but it delivers an invigorating and entirely unpretentious legal high.