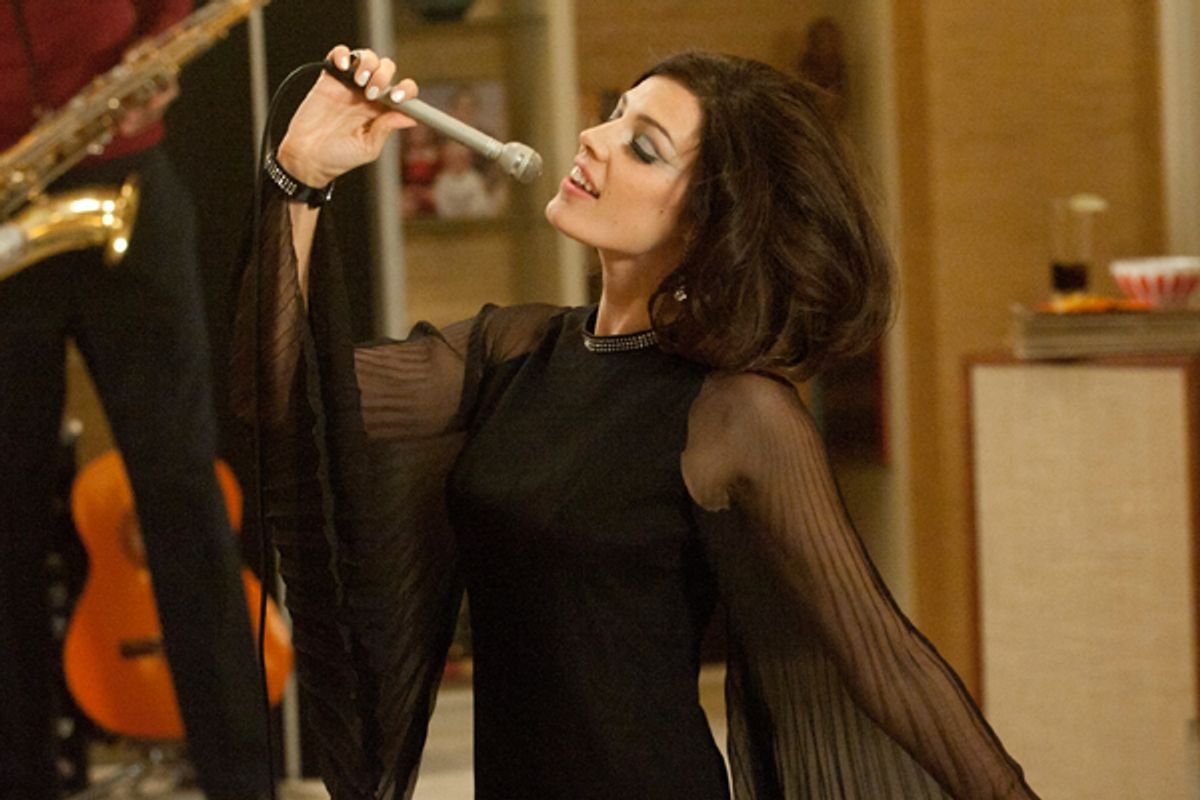 The breakout moment of last night’s “Mad Men,” as if you needed telling, occurred a little before the halfway point, when Don Draper’s new, young wife, Megan, not at all just the guileless, gorgeous secretary she seemed to be at the end of Season 4, serenaded him with a rendition of the suddenly famous “Zou Bisou Bisou.” (The title translates to something like, “Oh! Little Kiss.”) Confidently shimmying and shaking around on the couple’s new white carpet in front of the crowded surprise party she orchestrated, Megan sang in French to Don while his colleagues watched and adjusted their belts. You can read about the song, its history, lyrics, and who’s performed it before here and here and here and here, but I want to talk about how it felt to watch Megan sing it. Because I am still recovering.

Confession: The first time I saw the episode, I could barely watch this scene. Spurred by professionalism, I tried, I really tried. But when Megan announced that it was time for her to give Don his present, pinned him to the black-leather and dark-wood footstool in the middle of their recessed living room, grabbed the mike, and called out “un, deux, trois, quatre!” so calm, confident and anxiety-free it seemed like her blood must be made of Xanax, I had to hit pause. I steeled myself: Megan looked great in her little black dress with no exposed arm and all exposed leg, and she, anyway, seemed positive she could pull it off. I tried again.

The French flowed out of her like so much suggestive baby talk. I hid my head. It was too much. She was too exposed. It was inappropriate. The wrong gift, given much too publicly, and with much too little anxiety. But even underneath two pillows and a blanket, I knew, I just knew Megan was singing mere feet away. Through covered eyes I caught sight first of Don’s rictus grin and disgusted eyes — half mortified, half turned on — and then Harry’s face, the blood having just departed for areas further south. The huge fur collar wrapped around Harry's neck suddenly looked to me like some mangy snake muppet, so riveted and aroused by Megan’s performance his coarse brown hair was also standing on end.

I was no longer mortified only for myself — though, of course, also that, still that, always that, maybe for the rest of my life, that — but for everyone on-screen. Don Draper, he and his lust just as on display as Megan and hers, but by no choice of his own; poor, disgusting, glazed-over Harry; Roger and his younger wife, forced to stand there in discomfort and simultaneously think about the disintegration of their own passion; Peggy and all the hundreds of work hours put into her almost-smirk; those partygoers simple and sweet enough just to enjoy it; those polite enough to smile through it; and everyone else, looking around to see if they could make fun of this, or if she was pulling it off.

I wanted to fast-forward, but I realized then that if Don and Peggy, Roger and Ken, Pete and Trudie, these characters I have spent four-plus years with, could not shut their eyes and curl up in the fetal position on the floor of Don's sleek new apartment, then neither could I. And as we all looked around at each other, it became clear that Megan was pulling it off. The unembarrassable force had overcome the immoveable object. As she hopped around, flipped up her skirt in front of her dashing new husband and his square, cynical not-quite-friends, as she suggestively ran her finger down her front, her total cluelessness as to why this might be something Don would hate, that the whole party would find uncomfortable, became an impressive act of will. Megan didn't care what you think — and it hardly mattered if that was more because of her youthful, untested overconfidence than her hard-won experience.

Toward the end of the performance, Megan started to dance with her whole arms. It was a sort of mod, vertical variation on the twist, but it reminded me of all those strange hippie-like girls who can invariably be spotted at concerts or large gatherings with music, often by themselves or one or two others, flailing and swaying around with no shame or sense of rhythm. Who are those arm-dancing girls? And don’t they know they look stupid? And why don’t they care?