"Mad Men" reminds us that the idea of the "marriageable woman" has evolved dramatically -- and continues to, today 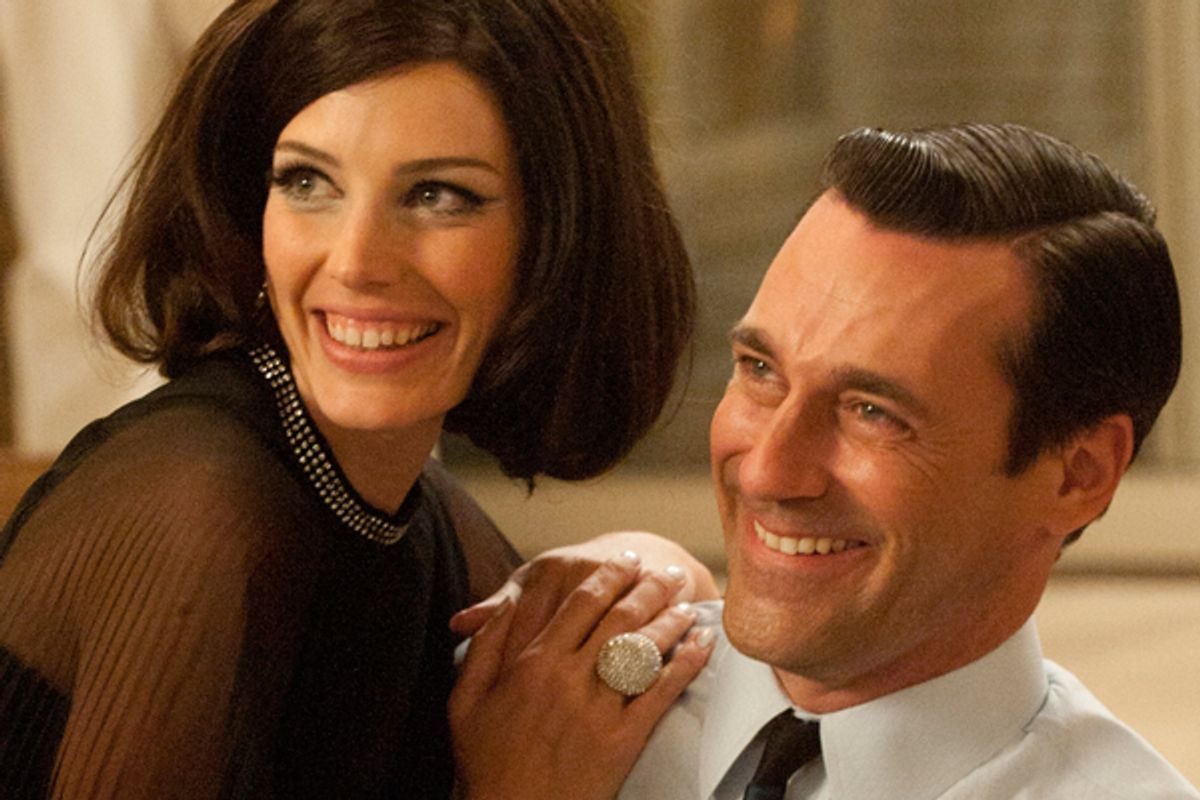 During a long train ride with an acquaintance, my female friend was recently paid the ultimate compliment. Comparing her to a woman he’s casually seeing, he looked deep into her eyes and said without irony, “but you, you’re wife material.”

I thought this antiquated expression had gone the way of “arm candy” and “trading up” as part of the second-wave agreement that likening your lady to something you consume or drive is just not cool anymore.  But perhaps even in 2012, our “Mad Men”-fueled nostalgia-fest is making us long for an era of clear-cut sexist distinction, when wives were wives and mistresses, mistresses. The AMC show's fifth season premiere explored this dichotomy, as Don Draper’s secretary-turned-wife Megan bridged the divide separating working women from their marriageable counterparts.

These days, concerns like Megan's seem absurdly anachronistic, but they also raise a bigger question: In an age of increasing divorce rates and single ladies celebration, what does this wife material “compliment” really mean?

Perhaps simply the apparent interest in a long-term relationship, one of the many options an independent woman can choose from. Rebecca Traister, Salon contributor, is in the midst of writing a book about unmarried women. “If you lift the social imperative for early marriage,” said Traister, “then the varied sexual and romantic impulses of the people around us are revealed. You see this incredible variety, not only in how people act, but in how they want to act and what might make them happy.” If there’s no longer just one accepted model for fulfilling relationships, people are liberated to choose from a spectrum of lifestyles and arrangements.

Back in the day, of course, being wife material meant you could keep a good home, would make a good mother, and that you were a “good girl” – not like one of those fast women that a guy can’t bring home to meet the folks.  You were respectable, that is, you didn’t challenge repressive gender norms. Surely there’s no need to spell it out, but you were material, literally that which constitutes an object: You could easily be fashioned into the role of wife. What made “wife material” a compliment is the dichotomy between the women who are and those who are not deemed worthy of putting a ring on it (where worthy means chaste).

And today? For one, sex outside marriage isn’t social suicide. Secondly, we’re told marriage isn’t what it used to be. Kate Bolick reports in her popular Atlantic piece, "All The Single Ladies," that in 1960, the median age of first marriage in the U.S. was 23 for men and 20 for women, while today it is 28 and 26. She writes, “Today, a smaller proportion of American women in their early 30s are married than at any other point since the 1950s, if not earlier.” And according to the Pew Research Center, Americans increasingly think marriage is obsolete.

Of course, that’s not to say that it is. Marriage is unarguably still a cultural norm, even as the conversation expands to include alternatives. Though it’s happening later in life, people are still settling down and doing the whole house-and-kids thing. And whether and when one does tie the knot can often run along geographic and socioeconomic lines. For women with financial and educational privilege, marriage has slowly shuffled out from under the spotlight of Ultimate Goal and has become one choice among many in a broader spectrum of what a fierce fulfilled female can look like.

What replaces this wife-or-spinster mantra is new terrain. Traister stresses that from 1890 to 1980 – for 90 years! – the median age for first marriage fluctuated between 20 and 22 for women. “We now live in a world where it’s normal and expected for women to live independently – professionally, economically and sexually – whether it’s for two years, 10 years or 40 years,” said Traister. “That’s never existed as a norm before. It’s created a whole new life stage for women.”

Before, a woman’s identity was shaped by how she was connected to her family, first as a daughter, then as wife and mother. Now she often has a period of single independence. And being in such a period, as a 20-something single woman, I attest that it can feel both exhilarating and tempestuous, as thrillingly liberating as it is often lonely, surprising, blissful and straight-up mundane. It's unimaginable how different life would be if I'd married two, three or four years ago, how differently I thought of relationships then.

Interestingly, in his new book "Going Solo," sociologist Eric Klinenberg found that women living alone are on average more content with their situation than their male counterparts. This is due, it seems, to the cultivation of other close relationships and communities, be it friends, family or neighbors. Men are, of course, as capable of such social networking, but seem to be more susceptible to isolation, especially in older age. Through urbanization and communication technology, modernity makes a wider array of relationships easier than ever before.

It's also worth noting that even the expectation that all satisfaction can come from one romantic relationship is a new idea. As historian Stephanie Coontz has written, “It has only been in the last century that Americans have put all their emotional eggs in the basket of coupled love.” As new generations couple up, we reinvent the way we think about relationships.

Popular culture sometimes tells the story of a passionate female friendship as important as romantic love. The recent blockbuster "Bridesmaids" – as well as its darker indie twin featured at Sundance, "Bachelorette" – highlights a new anti-rom-com genre where women are the ones making the jokes, and despite the titles, it’s not all about love and marriage. Kristen Wiig’s great success has been praised for representing the multidimensional women the film was made for and by. The once competitive social and economic pressure to become a wife translates (with the exception of "Bridesmaids'" pat ending) into a humorous girl fight for the role of best friend.

As the stigma of raising children outside of wedlock declines – over half of births to American women under 30 occur outside marriage – and the normative nuclear family is less mandated, a reimagining of the family may be taking place: from same-sex relationships to single parenting, community living to polyamory, and more. This isn’t to say that alternative arrangements are always easier or more satisfying; as often as single parenting isn’t always difficult, it is not always easy. But it is liberating – the idea that family planning doesn’t necessarily have to follow the path prescribed by the conservative right.

Notable events in the effort to legalize same-sex marriage, like the recent overturning of Proposition 8 by the 9th Circuit Court of Appeals, widen parameters to include many more couples as marriageable, and demonstrate that more and more Americans believe the law should recognize same-sex marriages (53 percent of Americans, according to a 2011 Gallup poll). As marriage equality expands, so too does the notion of marriage.

I'm reminded that "wife material" is meant, deep down, as a genuine, if misguided, compliment. We've all met someone and thought, Hey, I want to spend time with this person, this is someone I could picture as my boyfriend, husband, partner -- even if rings, wedding cake and forever aren’t regular visitors to our imagination. The assumption that this is something that especially women want to hear is an obsolete translation of a larger, much more correct cliché that people just want to love and be loved.

What Traister described as the lifted imperative to marry really does give us a better view of how different people truly are. I've never been one to imagine my wedding or even, really, my romantic future at all, and I don't say this with particular pride; in the past the realization has freaked me out. My aforementioned friend, on the other hand, has been super-excited about her domestic future since she was old enough to flip through Martha Stewart Weddings. But the idea that one of us is normal while the other isn't simply isn't compatible with the present.

And it is increasingly clear that we can all be made of wife material, but only if we want to be.