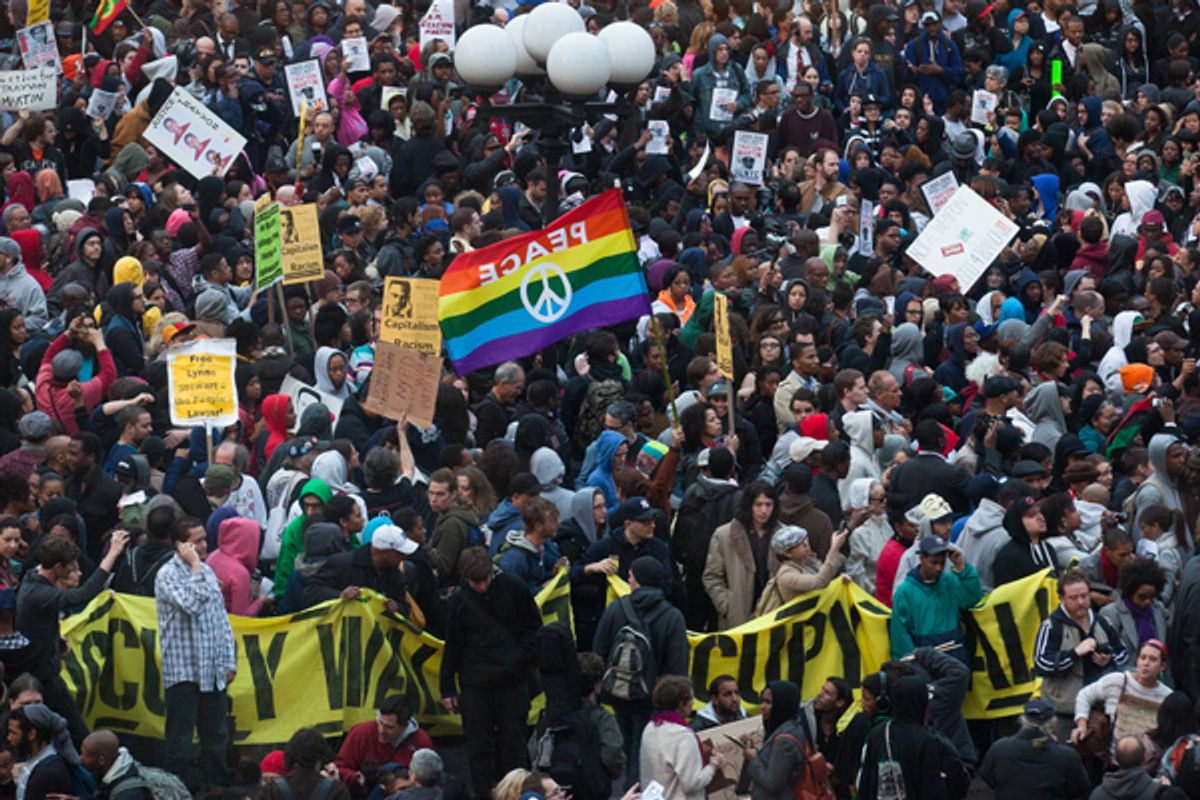 Following the Million Hoodie March for Trayvon Martin in New York last week, some have wondered how much Occupy Wall Street actually cares about Martin’s death. Stand-up comedian and commentator Elon James White, writing in News One for Black America, condemned the actions of Occupy participants, arguing that they "co-opted" the march. "With chants of 'We are the 99 percent' and signage to that effect as well, I was a little thrown off. I thought the purpose of this march was to bring awareness to the death of a young boy," he wrote, noting disappointment too that a number of marchers pulled down police barricades and behaved in a way that he saw as destructive and a distraction from the march's intended purpose.

For many protesters, “Bring[ing] awareness to the death of a young boy” means more than talking about Trayvon Martin. In New York, it’s hard to think about his death without also thinking about the institutionalized racism that hangs over the city’s minorities – the sort that saw three young black men (all younger than 23 years old) gunned down by the NYPD last month alone; the sort that means 87 percent of those people stopped and frisked by New York police are black and Latino and almost always innocent.

But there’s a more direct connection between Martin and Occupy, one that suggests the two causes are more closely related than it may at first appear. The Florida “stand your ground” law, which allowed Martin’s killer, George Zimmerman, to claim legal immunity, was pushed in the state by the right-wing lobby group American Legislative Exchange Council, or ALEC, which also has been a major target of Occupy's anti-corporate action.

Before Martin's death became a national controversy, Occupy was protesting ALEC on Feb. 29 as part of a day of protest called "Shut Down the Corporations" (Martin was killed on Feb. 26 but it had not yet become a national story). As I reported at the time,  Occupy groups in 70 cities targeted ALEC’s corporate clients, including Bank of America, Pfizer, Wells Fargo, Johnson & Johnson -- a precursor to Occupy's spring resurgence in recent weeks.

ALEC, it turns out, also helped the NRA lobby for “stand your ground” laws in 16 states. The law grants legal immunity to someone who uses “deadly force if he or she reasonably believes it necessary to do so to prevent death or great bodily harm to himself or herself or another or to prevent the commission of a forcible felony.” In a society where non-white youths are treated as criminals for walking down the street, “stand-your-ground” carries potentially (and actually, in Martin’s case) devastating consequences. It’s worth noting too that ALEC helped push model voter ID laws, which also disproportionately impact people of color.

The ALEC link helps illustrate how seemingly distant phenomena, like Wall Street greed and Martin’s death, arise from similar conditions: the outsized influence that narrow interests, with the help of groups like ALEC, can have on politics. This realization has always been at the heart of Occupy concerns. The movement has also always been attuned to institutional racism, not just in New York but nationwide. I remember standing in Zuccotti Park in early October as a march of hundreds returned, booming, “I am Troy Davis!” in response to Davis’ controversial execution in Georgia. Indeed, Occupy Atlanta renamed the site of its encampment Troy Davis Park, while Occupy Oakland commemorated a young black man shot in the back by a transit officer in 2009 by renaming its park Oscar Grant Plaza. Raising awareness about racist murders and police practices has been part of Occupy all along – not something it has co-opted along the way.

Certainly tensions arose between protesters during the Million Hoodie March, which filled the streets around Union Square last week. When the crowd splintered into two, some marchers headed to Times Square, some downtown. I was on the Times Square march, which was more unified than the southbound one. That night I certainly saw many hundreds of people who had never been to an Occupy event previously, shouting in unison "Fuck the Police" and carrying signs connecting racism and capitalism -- these were not just long-term occupiers and most were not white. Not everyone shared the same ideas about tactics, messages or even politics that evening in the streets. White had a right to disagree with the attitude and actions of those around him, but it's also worth noting that these arguments constantly arise between self-defined “occupiers” too.

For some protesters, the Million Hoodie March meant calling for Zimmerman to be brought to trial; for others it meant calling for investigations into “stand your ground” laws; for still more it meant protesting ALEC and the corporate leviathans it aids. Martin’s case exemplifies how these calls can be interconnected. No one has purview over what does or does not constitute a call or action for justice and anti-racism when injustice and racism so violently and pervasively abound.