Fat-shaming a child into a book deal 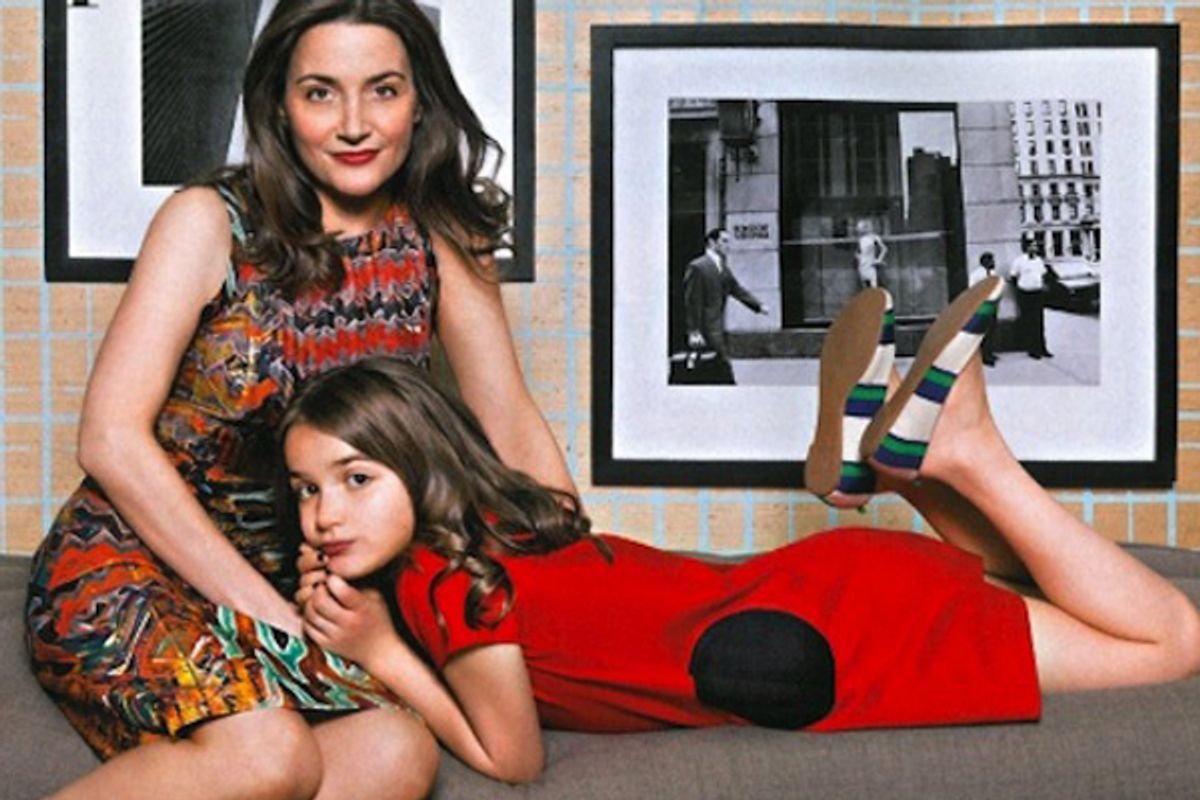 Dara-Lynn Weiss with her daughter, Bea.
--

How could a story that Jezebel last week declared  "The Worst Vogue Article Ever" get even more terrible? By becoming a book.

It began with a feature called "Weight Watchers" in the April Vogue, written by Dara-Lynn Weiss. In it, Weiss chronicles her then 7-year-old daughter Bea's dieting odyssey after the child had "grown fat." It was a tale that involved putting Bea -- who at 4-foot-4 and 93 pounds was veering toward childhood obesity -- on an intense regimen of calorie restriction and public shaming. "I once reproachfully deprived Bea of her dinner after learning that her observation of French Heritage Day at school involved nearly 800 calories of Brie, filet mignon, baguette and chocolate," she writes. "And there have been many awkward moments at parties, when Bea has wanted to eat, say, both cookies and cake, and I've engaged in a heated public discussion about why she can't."

Ultimately, after an "exhausting" year with her often "humiliated" daughter, Bea dutifully dropped 16 pounds, and just for lagniappe, grew 2 inches. Unsurprisingly, her mother, who admits, "I have not ingested any food, looked at a restaurant menu or been sick to the point of vomiting without silently launching a complicated mental algorithm about how it will affect my weight," was pleased -- and turned the story into glossy magazine fodder. But Bea admits, "I'm not a different person just because I lost 16 pounds. Just because it's in the past doesn't mean it didn't happen."

The story hadn't gained much traction until Jezebel writer Katie J.M. Baker unflinchingly called Weiss "one of the most ... selfish women to ever grace the magazine's pages" -- and a lot of people agreed. MSNBC leadingly asked if she was "responsible or reprehensible" while Fashionista called her "obsessive." And a disgusted commenter on New York magazine who described herself as a former eating-disordered teen wrote, "What you hate is what you see in her that reminds you of yourself."

And that's the kind of talk that lands ladies book deals. The new book, tentatively and appallingly called "The Heavy," will be published by Random House's Ballantine imprint.

I admit the Weiss story strikes an acute personal chord: I have a daughter of the same age and name as Weiss', one who spent part of this past weekend in the emergency room with gastroenteritis. I'm not always thrilled with her general preference for chocolate milk and hot dogs myself, but I know that watching your little girl so wiped out she has to have an IV drip makes a parent grateful in all kinds of new ways for the gift of her health and appetite. And while I am greatly concerned about rising rates of childhood obesity and the health toll they will take on an entire generation, I am convinced that the way to promote healthy eating and activity isn't by berating or shaming 7-year-olds.

But what makes the book deal for this truly revolting story even more reprehensible is that there is likely no one involved who doesn't realize exactly how contemptible Weiss' story is – including Weiss herself. Everything about this unholy arrangement smacks of "Let's cash in on that whole 'Tiger Mom' thing! Nobody's hated a woman like this since Amy Chua!" Ka-ching. Ka-ching.

So that's how you get a book published, ladies. Just write an article about what a mean mommy you are, get a lot of sexy media attention and hate mail for it, and watch the bidding war commence! That way, we can be intergenerationally negative toward females -- the "fat" little girls we put on diets, the daughters we call "garbage," and the mothers who behave in such frosty, neurotic and controlling ways toward them. Want a bestseller? Try being a contemptible bitch.

It's a depressing way to sell books, and an even more depressing way to parent. Like an episode of "Toddlers and Tiaras," it rewards the kind of mothering that makes many of us shudder. It doesn’t even matter that most the attention Weiss gets is negative. It's a spotlight. It's validation. Weiss, enjoying her imminent advance, likely doesn't care about anything else. And as a bonus, she'd probably be happy if she made a whole lot of people – both parents and readers – lose their appetites.