How Romney tricked the right

The key: Recognizing that conservative opposition to ObamaCare has nothing to do with the details of ObamaCare 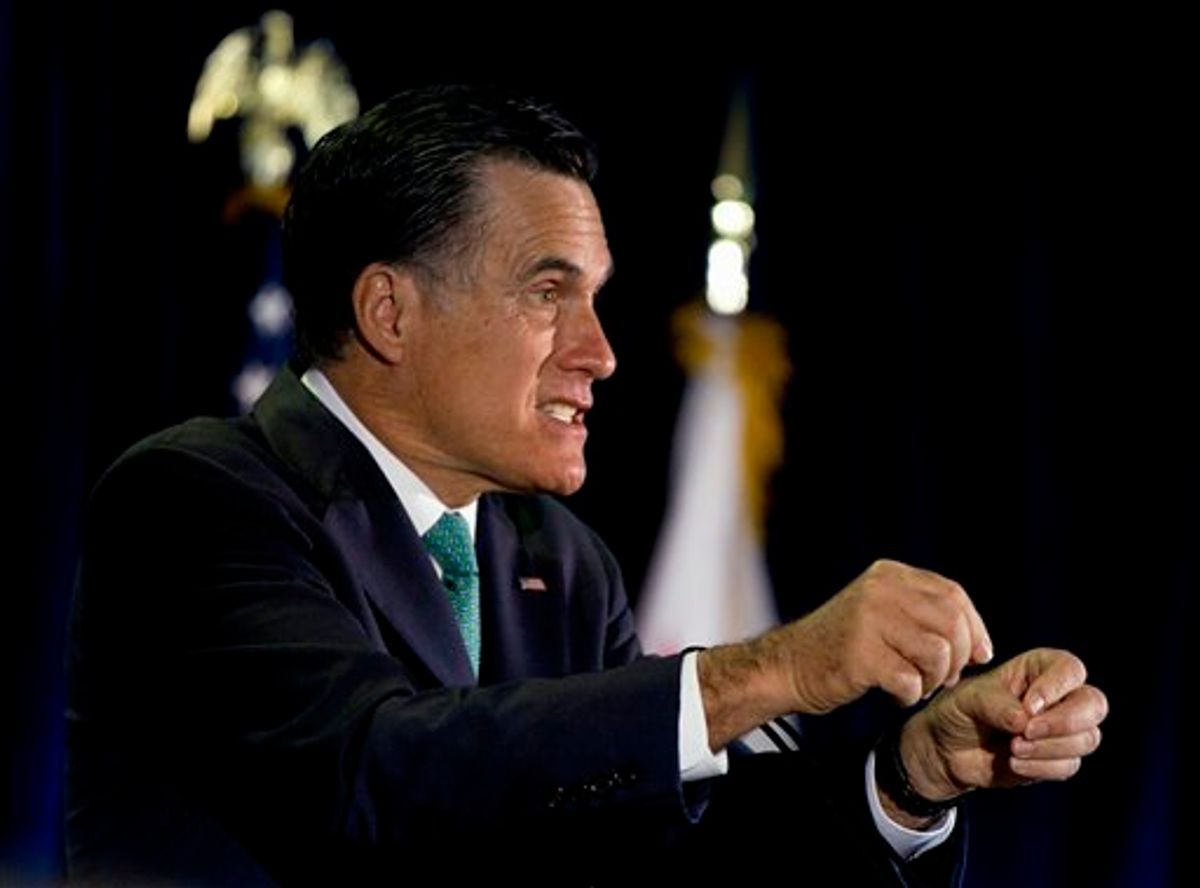 It’s fitting that the Republican Party finally seems to be uniting around Mitt Romney just as the legal battle over the healthcare law President Obama signed in 2010 takes center stage.

This confluence of events may have seemed unlikely when the GOP campaign began last year, back when conventional wisdom held that Romney’s nomination prospects were inversely related to the prominence of the healthcare debate. After all, it was ObamaCare, more than any other single issue, that had galvanized the right-wing uprising against the president, and it was Romney’s own 2006 Massachusetts law that had provided the blueprint for Obama’s model.

For Romney, the conventional wisdom held, squaring his own decision to impose an individual mandate on six million Bay State residents with the conviction of conservative leaders that this amounted to a Marxist-inspired assault on liberty would be … very challenging.

And yet, as Roll Call’s David Drucker reports, DeMint and another Tea Party icon in the Senate, Marco Rubio, are happily giving Romney cover on the issue, as are other Republicans on Capitol Hill.

“The laws are different,” Rubio told Roll Call. “The issue here is not some state’s law. The issue here is whether the federal government should have a 50-state solution for our health insurance problems. And the answer is that at least the solution the Obama administration came up with is not the right one.”

By now, this isn’t really surprising. For all of the dire forecasts about healthcare being the death of his campaign, Romney has essentially skated on the issue this primary season. How and why says a little about his facility for obfuscation – and a lot about the true nature of the right’s opposition to healthcare reform, and to Obama in general.

Basically, Romney’s approach has been to play dumb, pretending to be baffled by suggestions that his Massachusetts law and Obama’s national program are largely identical and claiming that there are all sorts vital differences between them. He’s just as opposed to and appalled by Obama’s law as they are, he assures Republicans, and is committed to waging war on it as soon as he takes office.

In theory, conservatives should see right through this. The idea that Romney’s law is different from Obama’s in vital, fundamental ways insults the intelligence of anyone who looks closely at them. And even if you accept the federal/state distinction that Romney pushes, the fact remains that he empowered the government of Massachusetts to compel every resident of the state to purchase healthcare or face a fine.

But Romney’s chief rival for the GOP nomination, Rick Santorum, has rather articulately pointed all of this out without gaining much traction. And the candidates who preceded Santorum as  Romney’s main foe had even less success, in part because of their own ineptitude, but mainly because conservative hatred of ObamaCare isn’t rooted in the details of the law – it’s rooted in opposition to Obama.

This explains why the issue played a very minor role in Romney first campaign for the GOP nomination, in 2008. He was just as guilty back then of imposing an individual mandate, but at that point the mandate was still understood as a policy idea with conservative roots. This is why Romney was joined by a representative of the Heritage Foundation when he signed his Massachusetts law in 2006. There were some voices on the right in ’08 who expressed genuine philosophical opposition to that law, but for others it was actually a selling point – and for most, it simply didn’t matter.

But when Obama became president, the right – as it invariably does when a Democrat occupies the White House – committed itself to reflexively opposing him. This meant branding his healthcare plan socialism and fighting it with all the hysteria that could be mustered. It didn’t really matter how the program was structured; whatever Obama proposed would amount to a government takeover of healthcare in conservatives’ minds. The details weren’t what mattered; the fact that it was authored by Obama did.

This simultaneously endangered and shielded Romney. If he admitted that RomneyCare and ObamaCare were the same thing and defended his program, he’d have been guilty of a capital offense against conservatism. But by pretending that his law is something completely different and railing just as loudly as every other conservative voice against ObamaCare, he’s made it virtually impossible for his foes to build a case against him – as Santorum has been discovering.

As a result, the party whose base has been animated by almost fanatical opposition to ObamaCare is now poised to nominate the guy who gave Obama the idea in the first place.