A board member of the NLRB is accused of leaking secrets to a Romney advisor. Will they lose their jobs? 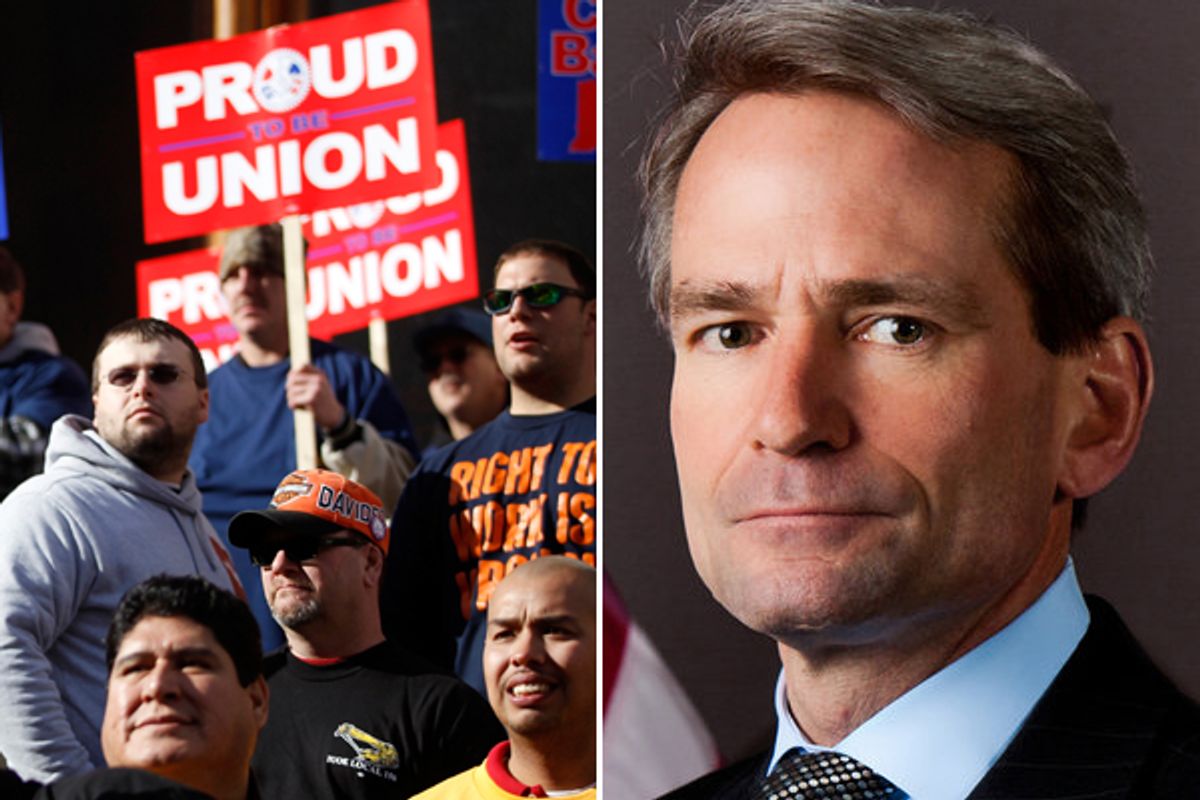 On Sept. 2, the National Review posted on its website an Op-Ed blasting a new rule requiring companies to inform employees of their union rights. The article condemned the rule as “an unwarranted usurpation” and “regulatory sorcery” that “diminishes” the National Labor Relations Board. None of this was particularly interesting or surprising, given the conservative politics of the National Review and the article’s author, Peter Schaumber, a former NLRB chairman who’s now advising Mitt Romney’s presidential campaign.

More scintillating than the article itself is the story of its genesis, which was laid out in a report from the NLRB inspector general this week. According to the report, it appears the article was edited by current NLRB member Terence Flynn, who served as chief counsel to Schaumber when he sat on the board. The Op-Ed “appears to be a further revised version” of a file found on Flynn’s government-issued computer, complete with tracked-changes edits marked as Flynn’s. And the IG says Flynn wasn’t just providing Schaumber with freelance editing: he is also accused of violating ethics rules by leaking to Schaumber and other conservatives internal info from the agency they were out to obstruct.

It was just the latest twist of intrigue for the NLRB, a once obscure agency that has become during the Obama administration a frequent target for Republicans in Congress and on the campaign trail. Furious over modest reforms like the notice-posting rule, last year key GOP senators pledged to block any new NLRB appointees. In January, over Republican protests, Obama recess-appointed three new members: two Democrats, and Flynn, a Republican. By appointing Flynn, Obama restored the NLRB for the first time in years to a full complement of five members. The president could have expected that Flynn would join the NRLB’s other GOP member, Brian Hayes, in opposing any pro-union moves. But he couldn’t have known the lengths to which his appointee had allegedly already gone to do just that.

The IG says Flynn violated ethics rules by sending Schaumber several kinds of NLRB info, including: internal legal advice memos; an email showing which NLRB members and attorneys had been assigned to certain cases; a heads-up that one NLRB member was researching the NLRB’s authority in a particular situation; info on a former chairman’s deliberations on a case; advance notice on when a new rule would be posted; an email from the Board’s executive secretary mentioning a precedent the NLRB might change; and an email revealing that the NLRB was considering filing a motion to consolidate two cases.

If the report is accurate, then Schaumber may have been in the hunt for more than just material for Op-Ed pieces. The inspector general also found that Flynn, or someone using his government computer, edited documents called “Schaumber business plan” and “SchaumberSuppBusPlan.” In these documents, Schaumber described opening a practice “by leveraging my Agency connections and focusing the attention of senior management on the likely priorities of the Obama Board and strategies to respond to them” and his ability to “serve as a liaison for the firm on matters requiring high level intervention” at the NLRB and elsewhere.

The IG’s findings were published late Friday on the website of the Democratic members of the House Education and Workforce Committee. The committee’s ranking Democrat, George Miller, sent a letter to Attorney General Eric Holder calling for a full investigation. In a statement yesterday, AFL-CIO president Richard Trumka called for Flynn to resign from the NLRB, for the Department of Justice to bring criminal charges if appropriate, and for Mitt Romney to dump Schaumber, who currently serves as co-chair of his campaign’s labor policy advisory group. Calling the report “nothing less than shocking,” Trumka warned that “Allowing Schaumber to remain as an advisor will speak volumes about candidate Romney and the value he places on ethics in government officials.”  (Spokespersons for the White House and the NLRB both declined comment; the Romney campaign did not respond to Salon’s comment request.)

Reached by email, Democratic Rep. Elijah Cummings, the ranking member on the House Oversight Committee, said the concerns raised in the IG report “are very serious and involve potential criminal implications … We are carefully reviewing this report.”

Flynn, for his part, has rejected allegations of wrongdoing. In an emailed statement, he decried “this manufactured controversy” and declared himself “troubled by the politicization of this internal matter, in which I have committed no wrongdoing.”  In the report, Flynn told investigators he was the innocent victim of Microsoft Outlook’s auto-fill feature – he meant to send the document to a different Peter, but Outlook filled in the wrong name. The IG notes that Flynn received, opened and deleted an email back from Schaumber thanking Flynn for sending the document, and sharing a link to his latest National Review Op-Ed.  Twenty-eight minutes after Schaumber’s email, Flynn sent a link to Schaumber’s Op-Ed to Hayes.

In a Friday statement, the Education and the Workforce Committee’s Republican chairman, Rep. John Kline, said the report “makes serious allegations” that have “been appropriately referred to the Department of Justice” and then took a swipe at Obama for recess-appointing Flynn in January: “This report illustrates the vital importance of the constitutional confirmation process.”

As the AFL-CIO calls for Romney to sack Schaumber, it appears this much at least can be said for him: His boast of “Agency connections” was no exaggeration.