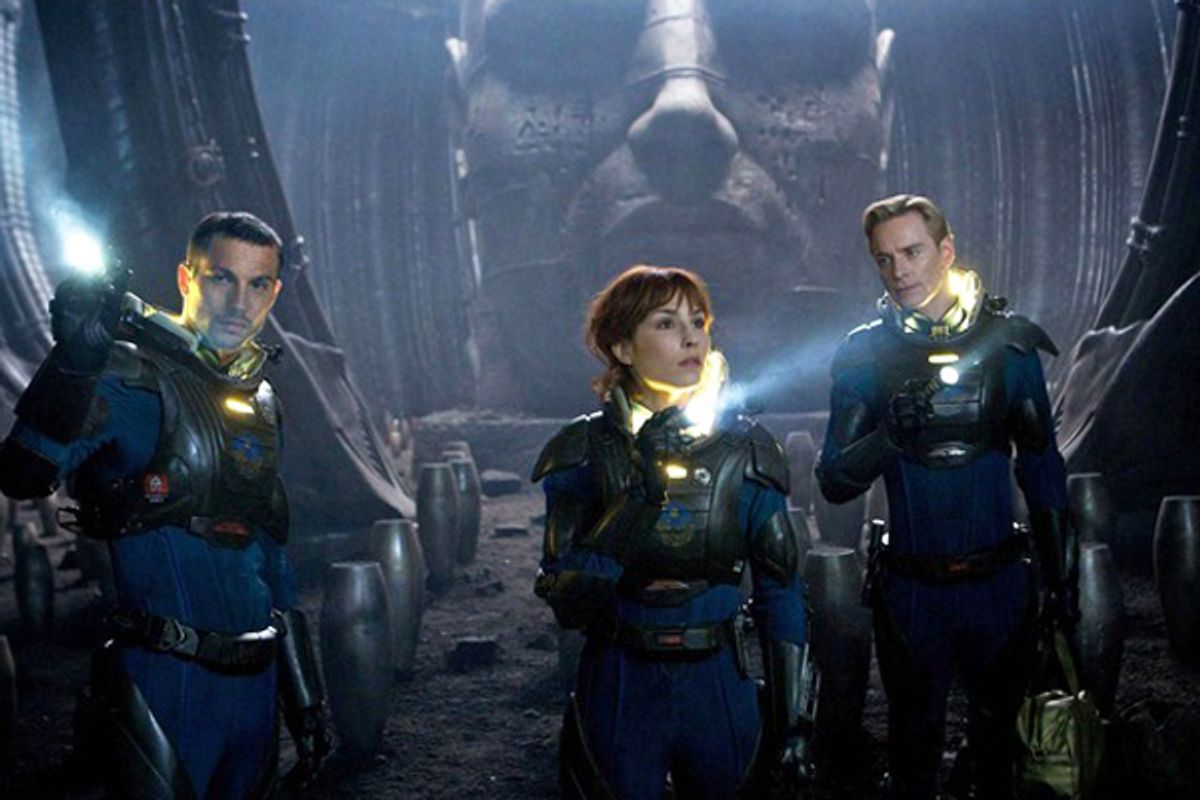 When James Cameron's "Titanic" gets its theatrical rerelease in 3-D next week, it will emerge into a very different world for movies than when it first came out.

It can be hard to notice how much has changed since 1997 just by watching a contemporary blockbuster like "Transformers" or "Twilight." But the shifts have been massive, and significant. The emergence of digital technology has given audiences more entertainment options than ever, while simultaneously opening up new ways for fans to find each other and discuss pieces of pop culture. As the Web provides ever-more information at an ever-quicker pace, new tools for making movies have allowed filmmakers to cut up and recombine images and sound at the furious pace our entertainment consumption now seems to require. And all of these changes are visible in a single piece of film marketing: the movie trailer.

Trailers have become a culture and an art form all to themselves. Being a true movie obsessive now means not only being up on films as soon as they come out, but trailers, too, and this practice has been greatly facilitated by the Internet. A certain kind of person will remember downloading the original "Phantom Menace" trailer in 1998 and then buying tickets for "Meet Joe Black" just to see it on the big screen. (Some of these people also may have worn matching T-shirts to this event and then left immediately after the 130-second clip was over.) The online release of a much-anticipated movie's trailer has now become a major media event, as the viral frenzy last week over the trailer for Ridley Scott's "Aliens" prequel "Prometheus" shows.

New trailers are dissected second-by-second for clues about the movie on online message boards and in fan communities across the Web. The "Titanic" rerelease -- and the marketing around it -- offers a rare opportunity to see directly how the trailer has evolved in the last decade and a half, along with the art of making big-budget movies.

Look at the two "Titanic" trailers -- the original and the new one. The 1997 spot takes the audience in a straight and narrow line through the plot of the movie. In two-and-a-half minutes, we get about 75 percent of the film: the scientific expedition, the arrival on the ship, the conflict, the romance. You have a pretty good idea what's going to happen. The new trailer is a different story. If you haven't seen the movie before, you would be hard-pressed to say what it was about, aside from a shipwreck and a love story. In the case of "Titanic," the most universally known film in existence, that's perfectly fine. But the trailer's style is far from unusual, even for new movies. Trailers in the '80s and '90s gave you didactic plot overviews with heavy-handed narration; trailers today offer impressionistic glimpses and visceral thrills.

For another example, look at the theatrical trailer for "Jurassic Park," from a little less than two decades ago. It gives you a step-by-step overview of the movie's plot along with another feature of older trailers: the omniscient narrator. "Since the beginning of time …" he intones as the trailer begins, and we're told what to expect. People will come to a park, dinosaurs will be brought back to life, they will get loose, and the people will have to survive.

Compare that to the trailer for "Prometheus." It is amazing. It makes you incredibly excited to see the movie. And you have almost no idea what it's about. (Something about Charlize Theron racing to turn off a really annoying smoke alarm?) There is literally more plot information in the YouTube description of the trailer than in the trailer itself. There's no narration, just portentously intoned lines about kings and beginnings, few shots last for more than a second, and it builds from a quiet beginning to ear-shredding shrieks accompanying micro-second glimpses of huge effects shots.

"Trailers are a lot more visceral than they used to be," said Jeff Smith of Open Road Entertainment, a veteran maker of movie trailers. "There's less information given to you. You feel it more than you understand it."

In conversations with trailer editors, they said that the form has changed in three main ways over the last decade and a half. The first is the move from narration to title cards. By the end of the '90s, the use of omniscient voice-over narration, which had been a feature of trailers since they began, came to seem as dated as Hypercolor shirts or wallet chains. The trailer for Jerry Seinfeld's "Comedian" did a great job parodying the clichés that had built up over time, though they didn't use the style's originator in the spot. (That was Don LaFontaine, who later did it anyway in a Geico spot; Don is the first hit when you Google "'in a world' guy.")

But there were technical reasons, too. "It's easier for us to cut with graphics because we don't have to rely on a narrator," said trailer editor Jim Hale of Fishbowl Films. "And sometimes a narrator doesn't work for a piece. We've done a lot of horror movies and sometimes it's hard to get a narrator to read with the intensity you need. The words you use on a horror trailer like 'terrifying' and 'shocking' can sound a little cheesy when read."

Voice-over actors (who are still used for some trailers, and are almost always used for TV spots, where the audience can't be expected to pay as much attention) have been replaced by two different devices. One is title cards: simple, straightforward slides giving you information. The other technique is to use clips from the movie to tell the story. In some cases this can be straightforward, but it can also be more abstract, as with "Prometheus." And it's been remarkably consistent across genres: compare the trailer for "Mrs. Doubtfire" to something like "Bridesmaids." It's the same basic idea, but without the narration. What you realize, watching these two, is how little the narration was really needed. Remove it from the "Doubtfire" trailer and you get the point just as well.

Another big change involves the way trailers sound. While the music used tends to be the focus, those noises you hear at the end of the "Prometheus" trailer simply didn't exist 20 years ago. "That's a way more subtle effect that I don't know if the general audience realizes, but people in the industry sure do," said Smith. "There's a greater emphasis on sound design than ever before, and a lot of these big trailers do spectacular things with it." (If you want to know what "sound design" is, check out this video about "Transformers.")

Again, technical reasons have driven this change. The installation of Dolby digital sound in most theaters has opened up a whole new set of possibilities. For one, sounds can be deeper and louder than was previously possible; for another, sounds can move around the theater, not just to the left or right, but backward and forward. All this heightens that "visceral" experience. If you want a trailer to convey dread, use an ominous bass sound; if you want it to show panic, a rapid high-pitched screeching can be used. The giant objects so common to blockbuster movies now can have their bulk properly sounded out.

The biggest change, however, is the pace of editing. Going back to "Titanic," both trailers share a sequence where we see Rose looking upward, cars being loaded onto the ship, and Jack running through the crowd. In the 1997 trailer, it lasts for seven seconds. In the new trailer, it lasts for four. It's the same content, the same information. It's just quicker. "Every decade the cuts get faster and faster and faster," said Brian McCaughey, the creative director of Doubleplusgood Entertainment. "And the information goes by at a much faster rate. That's something that George Lucas was very big on as far back as the early 1980s: Let's see how fast we can get things going before they become incomprehensible."

The switch to digital again has had a huge effect on this acceleration. "When you're editing on a computer, it's easier to move sections of a trailer around," said Hale. "You can rearrange things quickly, moving one second of the story around to see if things work. Back when they were editing trailers on film, it was a lot tougher to take a chunk out of the middle of the trailer because you had to go get a new shot duplicated. Now you can just drop things in. You've got instant access." It's also allowed editors to make much smaller, faster cuts, bringing images down from a movement to, sometime, a blink.

Oddly enough, the rerelease of "Titanic" also shows how this trend may be starting to turn back. "When you're cutting a 3-D trailer your speed goes down massively," said McCaughey. "You can't do the fast Michael Bay, Tony Scott cuts. If you cut it that way in 3-D, the eyes don't have a chance to adjust to the images in 3-D. They're going by too fast and it just doesn't work."

It may be too much to hope that we really see a slowdown in cutting. (That it is premised on the survival of 3-D seems an awful sort of Sophie's choice.) What's clear, though, is that trailers have come into their own. Those who make them have to stay out of the spotlight, not wanting their work to overshadow the movie itself. But a careful eye will reveal some true treasures from the past decade and a half, from "Gone in 60 Seconds" ("a real game-changer," said Smith) to "Where the Wild Things Are." And trailers have spawned their own communities, like the forums at Movie-List.

"There are a lot of great trailers out there," said Hale. "In this business, the competition used to be not as heavy as today. Everyone's stepped up their game. Trailers have become a real art form in and of themselves."