An arms dealer sells his wares on a Capitol Hill street 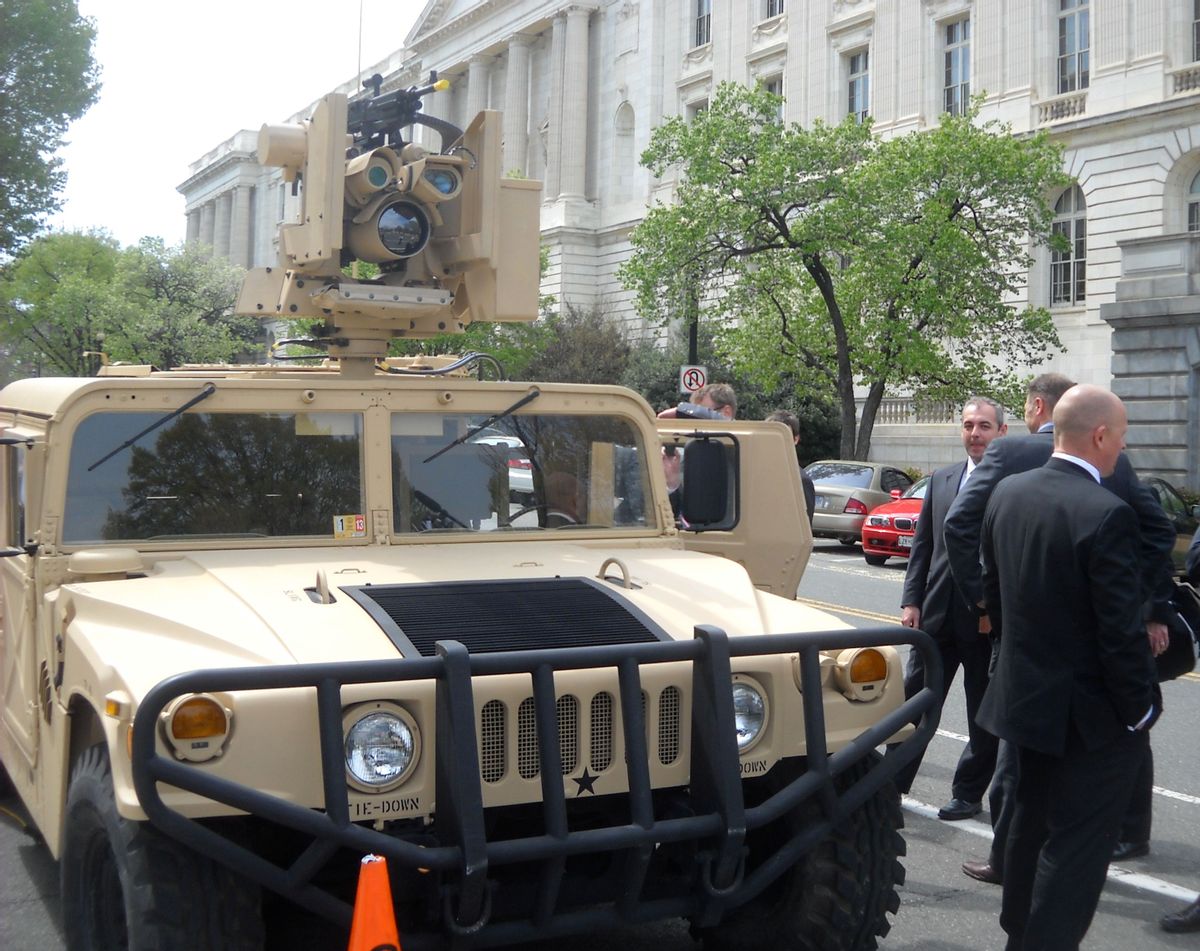 I thought I had stumbled into a movie set about martial law in America. The beige wide-body Humvee parked right outside the Dirksen Senate Office Building on Capitol Hill Wednesday featured a roof-mounted machine gun that seemed to be aimed at staffers headed to work, healthcare reform protesters headed to the Supreme Court, and the occasional wandering tourist. I went for a closer look, and a friendly public relations man set me straight.

Actually the vehicle was called the Crow, and this was the 10,000th such vehicle built by Kongsberg Defense Corp., a Pennsylvania-based subsidiary of a Norweigian company. The friendly P.R. man introduced me to Rune Johannessen, the company's vice president for business development in North America, who shooed three little boys out of the gunner's seat and showed me its virtues.

In the Crow, the gunner sits in an armored compartment behind the driver and fires the machine gun remotely. The cross hairs on the video screen indicated that, if the gun had been loaded, I could have squeezed the joystick and terminated with extreme prejudice a couple of terrorists walking out of Union Station, located three blocks away. "It has a range of more than 1,000 meters," Johannessen explained

As a symbol of the capital's Permanent War culture, the marketing of the Crow in the shadow of the Capitol is apt. After all, this wasn't the U.S. Army patriotically showing of its Big Stick. This was a private company, owned by foreigners, hawking its wartime wares on public property. The company had received permission from an unidentified senator, according to a Capitol Police spokesperson. It was all very routine.

And this was not just any battlefield weapon but a system designed for the occupation of countries whose people are hostile. First mass-produced for the Iraq war, most of the 10,000 Crow vehicles have now been shipped to Afghanistan where the U.S. war is so unpopular that Afghan soldiers regularly turn their guns on their putative NATO allies. There's no high-tech solution to that.

The Crow is designed to insulate American soldiers from people who would do them harm. That's a good thing.  But is it a good thing that war is so normal in the American scheme of things that an arms merchant can set up shop on the sidewalks of Washington like a half-smoke vendor? During my visit, the men in suits touting the vehicle never lacked a curious crowd of men and boys. At a time when America's wars are, in Naomi Klein's words, "never-ending and invisible," the passersby seemed eager for a look at how we fight.

I asked Johannessen why he parked his product on this particular corner.

"A lot of people on the Hill don't know about these systems," he said. He said the Crow offered a cheaper and more effective solution to the hazards of combat zones than competitors who simply add armor to armed vehicles.

Johannessen added that Kongsberg has had a long history with the U.S. military dating back to 1892 when the company sold rifles to the Army. "We plan to stay for another hundred years," he smiled.

In a capital permanently at war, that's probably a good business model.