The debate the GOP can’t have

When the conversation is about healthcare and not “Obamacare,” it’s trouble for Republicans 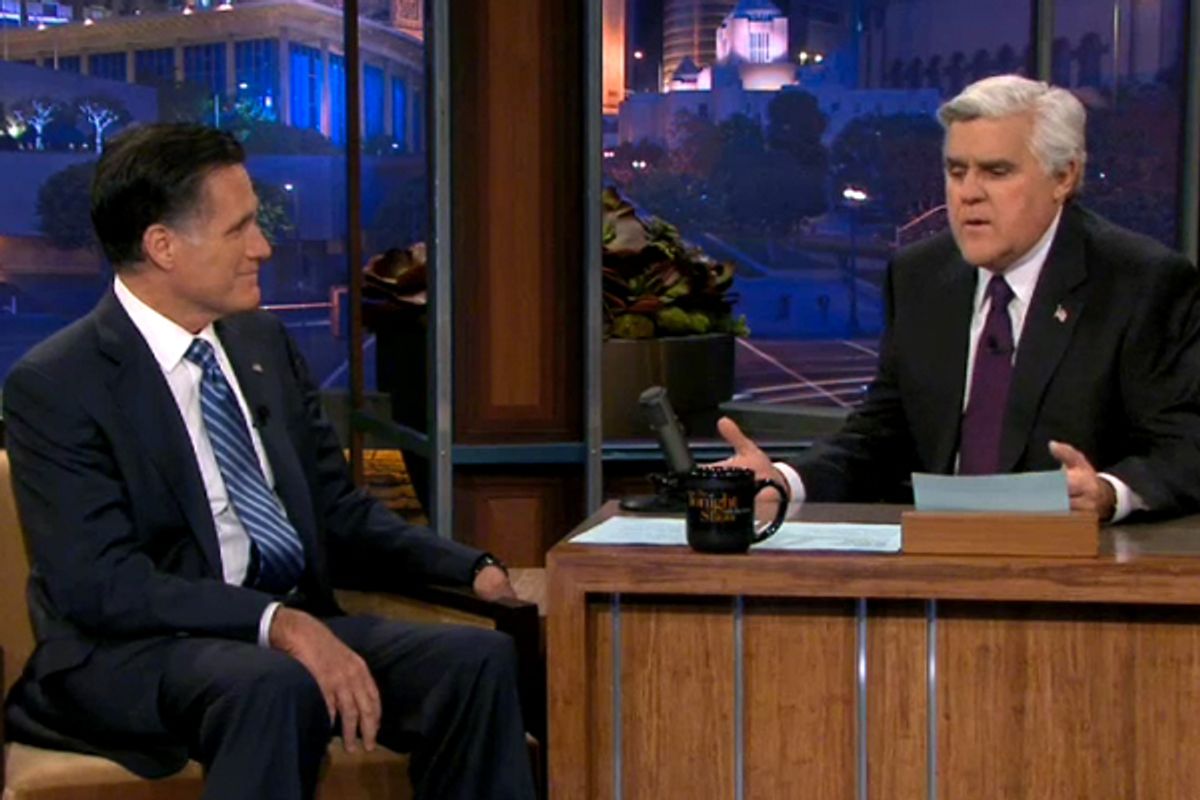 Mitt Romney and Jay Leno on "The Tonight Show"
--

Strategically, this was probably a good week for Mitt Romney to appear on “The Tonight Show.”

With the Supreme Court hearing arguments about the constitutionality of the Affordable Care Act, healthcare is dominating the news, which makes it easy for the press – and Romney’s opponents – to bring up the fact that Romney’s Massachusetts healthcare law essentially served as the blueprint for Obamacare. Sitting down with Jay Leno gave Romney a chance to stay visible and avoid the impression that he’s cowering in fear,  with little chance that he’d face an intense grilling.

And generally speaking, he got what he was looking for when he went on Leno’s show last night. But the host did bring up healthcare, asking a seemingly innocuous question that ended up highlighting a very significant problem with Romney’s – and the GOP’s – posture on the issue. If you’re president and you repeal Obamacare, Romney was asked, what will happen to the people with preexisting conditions who are now guaranteed insurance coverage thanks to the law?

ROMNEY: People with preexisting conditions -- as long as they’ve been insured before, they’re going to continue to have insurance.

LENO: Suppose they were never insured?

ROMNEY: Well, if they’re 45 years old, and they show up, and they say, “I want insurance, because I’ve got a heart disease,” it’s like, “Hey guys, we can’t play the game like that.” You’ve got to get insurance when you’re well, and if you get ill, then you’re going to be covered.

Leno pressed the issue a bit and Romney stood his ground, arguing that a system that allows people to buy insurance only when they become seriously ill wouldn’t be sustainable. “You don’t want everyone saying, ‘I’m going to sit back until I get sick, and then go buy insurance.’ That doesn’t make sense,” he said.

As Greg Sargent points out, Romney is, without saying it, making the case for the individual mandate, which compels healthy people to purchase insurance, thereby making it affordable for insurers to cover everyone – including those with preexisting conditions. This is the logic that made Romney build his Massachusetts law around a mandate. But when Barack Obama became president and embraced the mandate concept, conservatives decided it was a form of Marxism and Romney – and every other Republican – fell into line, portraying Obamacare as a freedom-killing abomination.

Romney’s comments to Leno speak to a potentially bigger problem for him and his party. Right now, the healthcare debate is built around the question of Obama’s law. A Democratic president and Democratic Congress passed a sweeping law two years ago that every Republican still rails against and that most voters don’t really understand. This is relatively favorable turf for Republicans, who have been able to convince many Americans to regard “Obamacare” as a synonym for Big Government.

But, as Steve Benen has shown, the component parts of Obamacare are actually quite popular, which helps explain why Democrats traditionally enjoy a polling advantage on healthcare. When Republicans are forced to address the issue without simply falling back on attacks on the bureaucratic overreach of Obamacare, they are at a distinct disadvantage, as Romney showed on Leno’s show.

This may not matter in the fall, of course. If the Supreme Court upholds the healthcare law, Romney and the GOP will probably be able to spend the general election decrying “Obamacare.” But for those who believe Democrats would actually benefit politically if the court tosses the law, Romney’s “Tonight Show” performance is Exhibit A.