A brutal day for healthcare 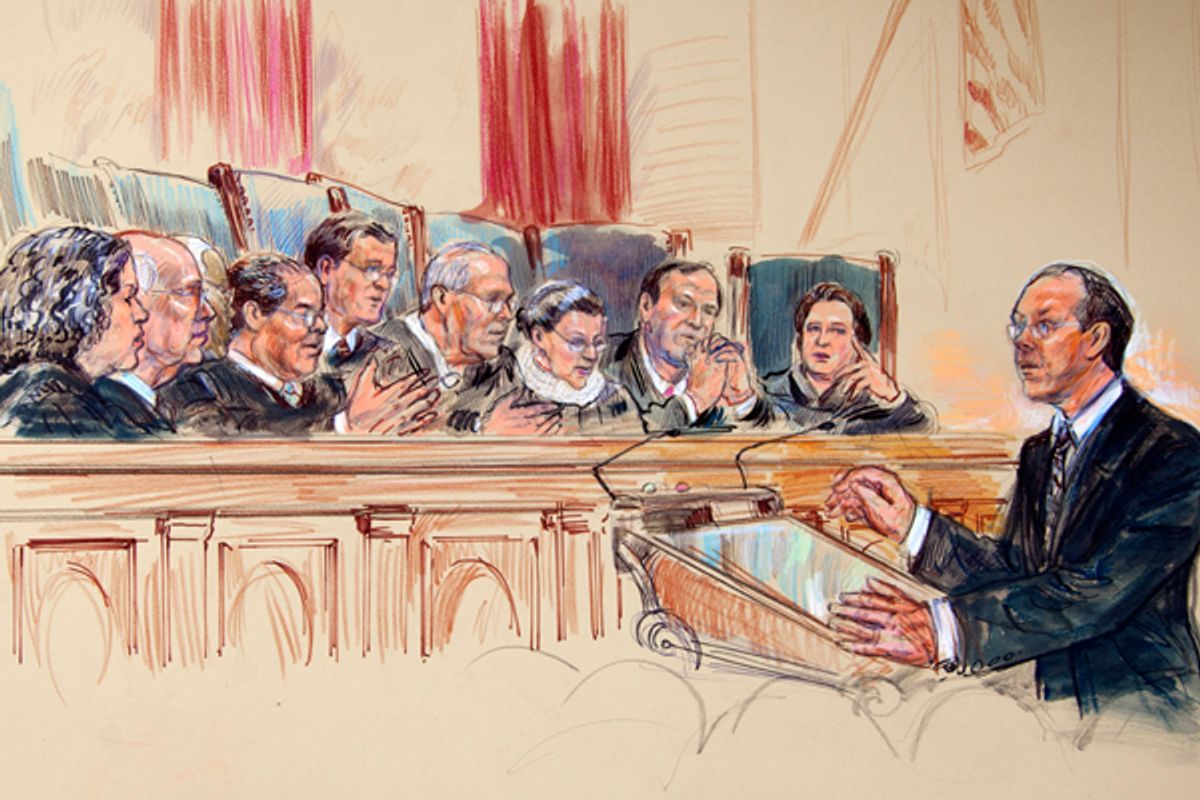 Wednesday's Supreme Court arguments on the Affordable Care Act involved complex technical issues of “severability” and “conditional federal spending,” so let’s get right to the core issue. The judges are being asked to take away health insurance from millions of people. And judging from what they said, they just might do it. Constitutional arguments that were clear howlers a few days ago now have a chance at becoming the law of the land.

The severability issue presupposes that the Court is going to accept the stupid arguments against the mandate. If it does, the Court must decide how much of the rest of the statute has to be struck down as well? The answer depends on how much of it Congress would have passed had it known it could not enact the mandate. The Obama administration claims that if the Court strikes down the mandate that individuals purchase insurance, it must also invalidate the prohibition against insurers discriminating against people with preexisting conditions, and the law’s limitations on how insurers can set rates. Its opponents want to throw out the whole thing. The Court had to appoint a lawyer itself in order to hear arguments that the rest of the law could work without the mandate, because there are other mechanisms, such as subsidies, to encourage young, healthy people to buy insurance.

The most extreme view was that of Justice Antonin Scalia: “My approach would be to say that if you take the heart out of this statute, the statute’s gone.” But that approach runs into the obvious difficulty that this huge bill contains provisions that have nothing to do with the mandate, such as improvements in Native American healthcare and the extension of benefits for black-lung victims. Pulling apart the obviously irrelevant bits is a huge task. Justice Stephen Breyer asked, “What do you propose that we do other than spend a year reading all this?” Even Scalia got a laugh when he asked, “You really want us to go through these 2,700 pages?”

Edwin Kneedler, arguing for the United States, pointed out that some provisions are already in effect without the mandate: 2.5 million people under 26 have gotten new coverage, for  example. Scalia speculated that this was in anticipation of the mandate, and would otherwise bankrupt the insurers, but Kneedler and Justice Sotomayor both pointed out that this is lousy economics: Those healthy people are a net benefit for insurance companies.

The complexities of severability may actually strengthen the case for the mandate, as Lyle Denniston pointed out, because they show what a huge task the Court would be taking on if it struck down the mandate. Scalia’s extreme position, if he sticks to it, may also help the mandate in another way, by convincing the other justices that he’s nuts and will say anything to strike down the ACA.

The federal spending issue turns on the expansion of Medicaid. Under the ACA, millions of the working poor – people with incomes up to 133 percent of the federal poverty level – are eligible for Medicaid. From 2014 to 2016, the federal government will pay 100 percent of the costs. Then its share decreases, to 90 percent after 2020. Because the ACA also gives states assistance with their new administrative costs, overall state spending will actually be lowered.

Twenty-six states are claiming that this conditional spending unconstitutionally coerces them, because they cannot realistically forgo the money, and because if they refuse to expand their rolls, they might lose every cent of Medicaid money. But let’s be clear: This is not about the states wanting to conserve their own money. It is about the states refusing to spend federal money, to help people that they do not want to help. (Paul Clement, the attorney for the challenging states, declared that his argument would not change if the federal government permanently paid 100 percent of the costs.)

As a legal matter, this is the craziest argument yet, which is why it was rejected by every lower court that heard it. It implies that, when states get federal money, they have a right to spend it any way they want, with no federal conditions.  It means that Medicaid itself has always been unconstitutional, along with federal unemployment benefits, highway funds, education funds and many other programs. Justice Breyer repeatedly pointed out that the provision in the Medicaid statute that is being challenged has been there since 1965.

Yet the conservative justices took it remarkably seriously. Because the federal government “has the authority under this provision to say you lose everything,” Chief Justice John Roberts declared, “it seems to be a significant intrusion on the sovereign interests of the state.” Justice Anthony Kennedy said, “There’s no realistic choice.” Justice Scalia offered the astounding claim that “if you predict ... that 100 percent of the States will accept it, that sounds like coercion.” If this is right, then if I offer 10 people triple their salaries to come work for me, and I can confidently predict that they will all accept, I am coercing them.  Alito endorsed the same idea, and also thought it relevant that the money “is going to have to come out of the same taxpayers that the States have to tax to get their money.”  That would mean that the federal tax code is itself an invasion of states’ rights. How long must we keep a straight face when presented with this stuff?

There was a legitimate basis for the Court to consider many of the issues raised by the healthcare law, since they had divided the lower federal courts and the law needed clarification. But the Medicaid claim created no division: Every lower court agreed that it was without merit. (Just how meritless is explained at length in a characteristically lucid piece by Marty Lederman.) Even the most preposterous arguments are magically elevated to respectability if they are arrayed against the ACA.

The Medicaid issue also calls attention to the political decisions that were made here – the decision of all those Republican officeholders to join this litigation. Why would you work so hard to deny decent medical care to working poor people in your own state? Political warfare evidently produces collateral damage. Obama owns the healthcare bill, so anything that can gum up its works is a Republican victory – and all 26 of the state challengers, attorney generals and governors, are Republicans. But all those working poor people are not Democratic Party operatives. They are ordinary folk trying to get by. The decision to pursue this litigation displays a calculated viciousness and cruelty that we have not seen in American politics in some time. It is like getting back at my enemy by hurting his children or his pets.